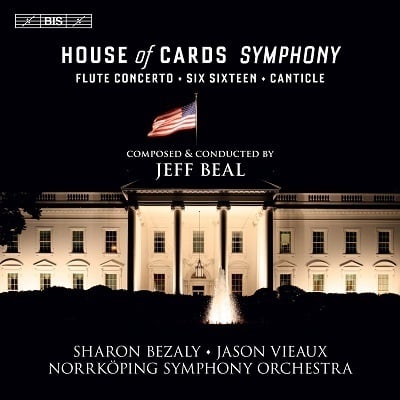 This release grew out of the fascination of Robert von Bahr, founder and managing director of BIS Records, for the television series House of Cards. It wasn’t only the script or the acting that grabbed him, however, but just as much the music. Jeff Beal, the composer of the soundtrack, was contacted and it was soon decided that he should compose a Flute Concerto for the virtuosic Sharon Bezaly. To complement the concerto a selection of music from the series was agreed upon, but with five seasons worth of installments to choose from, this quickly grew into a large-scale House of Cards Symphony. Three other works were added to the double album: Six Sixteen for guitar and orchestra (performed by Grammy winner Jason Vieaux), Canticle for strings, and a brand new House of Cards Fantasy for flute and orchestra.