A German composer of Polish descent, Moritz Moszkowski had an international reputation when he died in 1925. These days, he is known mostly for a group of pieces that he wrote originally for piano duet. This morning, we heard a classic 1957 recording conducted by Ataulfo Argenta of the orchestral version of one of these pieces, the “Spanish Dances”. Which of the Moszkowski “Spanish Dances” was it? 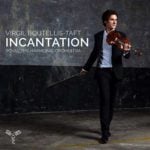