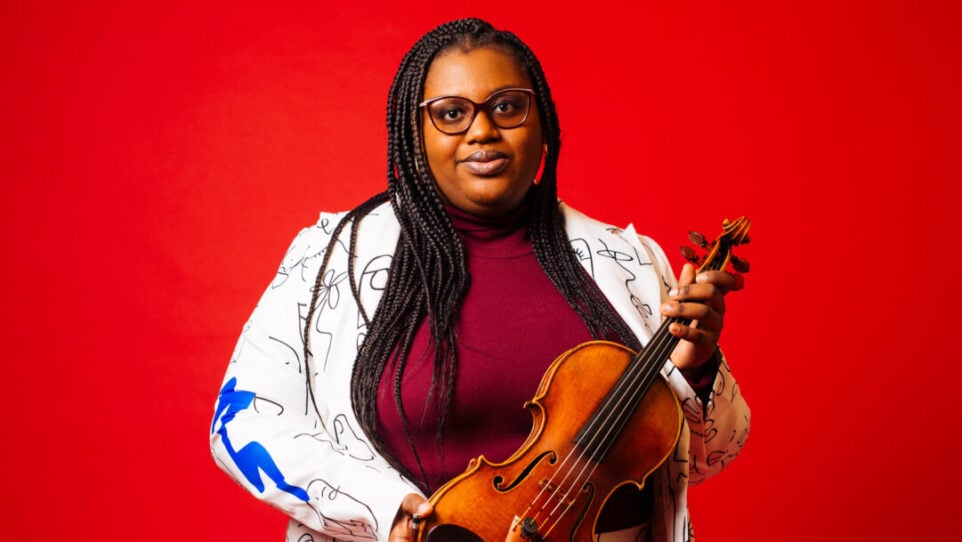 Caitlin Edwards began studying the violin at the age of eight, through the Music Opportunity Program, a non-profit organization in Birmingham, Alabama. She went on to be the recipient of the 2018 Rising Star Award from the Gateways Music Festival.

Caitlin received degrees in Violin Performance from University of Louisville and DePaul University, studying with J. Patrick Rafferty and Janet Sung. She is currently a mentor with the Chicago Musical Pathways Initiative, a program designed to offer training for talented student musicians from traditionally underrepresented backgrounds. She performs frequently with local artists, and  her string quartet, D-Composed, based in Chicago, which recently made their national television debut on The Late Show with Stephen Colbert.

She has soloed with the Chicago Solisti, University of Louisville Symphony,  Alabama Youth Symphony and was a finalist in the Collegiate Virtuoso Concerto Competition in Atlanta, GA. In 2020, Caitlin was featured as a soloist in the “Dreams of Hope” documentary which premiered on PBS across the US and has received awards nationally and internationally.

She’s performed and recorded with artists such as John Legend, Israel Houghton, Ms. Lauryn Hill, Common, Yolanda Adams, India Arie and on PJ Morton’s “Gumbo Album”, for which she received a Grammy Certificate. She also recorded for the Disney movie score, The Lion King, at Sony Studios. Caitlin’s current projects include writing and arranging strings for upcoming projects, remote recording for albums, teaching, and working.

With the Chicago Symphony Orchestra, he has appeared on numerous chamber music and new music concerts, and was a featured soloist in subscription performances of Messiaen’s “Trois Petites Liturgies”, for which John von Rhein in the Chicago Tribune wrote: “Daniel Schlosberg played the daunting piano part splendidly”; and Lawrence A. Johnson of the Chicago Classical Review wrote of “a prominent, challenging piano part, played here with great fire and conviction by Daniel Schlosberg in a notable CSO debut.” He is also a frequent pre-concert lecturer at the CSO, and has adjudicated its young artist concerto competition.

Schlosberg can be heard on a number of recordings, including: Stephen Andrew Taylor’s quartet “Quark Shadows” (Albany Records) with members of the Pacifica Quartet and Chicago Symphony; as the soloist in Dimitri Tymoczko’s Piano Concerto, “Another Fantastic Voyage” with the Illinois Modern Ensemble (Bridge); and Augusta Read Thomas’s “Starlight Ribbons” (Nimbus Records, commissioned by Harvard’s Fromm Foundation), her most extended solo piano work, for which he also gave the live premiere. His two solo albums, “Child’s Play” (Schumann, Lachenmann, Paert and Debussy) and “Gaul Me Maybe: French Baroque Keyboard Works” (Centaur) have garnered critical acclaim. His most recent recording is of Lei Liang’s “Inkscape,” a quintet for piano and four percussionists, with Grammy-winning Third Coast Percussion (New World Records).

He gives frequent solo recitals at Bargemusic and the Los Angeles County Museum of Art, and in past seasons has given solo and chamber music recitals at the Austrian Cultural Forum (New York) and Phillips Collection (D.C). He appears frequently on radio stations nationwide.

Schlosberg is an avid proponent of new music and collaborates frequently with Eighth Blackbird and Third Coast Percussion, and has also worked with the International Contemporary Ensemble, Ensemble Dal Niente and Pittsburgh New Music Ensemble. He was a founding member of Yarn/Wire. Notable premieres include the US premiere of renowned composer Kaija Saariaho’s “Calices” with violinist Austin Wulliman; the west coast premiere of Julius Eastman’s “Gay Guerrilla” on the Jacaranda Series (Santa Monica), with a quartet of pianists including multiple Grammy-winner Billy Childs, and several sets of solo pieces by Stanley Walden.

A recent project of note has been Alexander Zemlinsky’s four-hand transcription of Mahler’s Symphony No. 6, which he has performed with Inna Faliks at Ravinia and elsewhere to critical acclaim. Other recent recitals include a song program at the Sacramento Festival of New American Music, and a Weill/Poulenc afternoon at the National Gallery of Art in DC.

Another particular interest of Schlosberg’s is song accompaniment, and he has a long-standing duo with the baritone Ryan de Ryke. In 2007, he curated and performed in a series of six concerts nationwide exploring the early chamber music and lieder of Erich Wolfgang Korngold, and each October he directs and performs in the Baltimore Lieder Weekend, a project which has received coverage in the Wall Street Journal and Baltimore Sun.

On harpsichord, Schlosberg has participated in the world premiere of Anna Clyne’s “Of Sudden Shut” on MusicNOW, played the continuo/recit for Le Nozze di Figaro for Opera Notre Dame, and performed excerpts from Vivaldi’s “The Four Seasons” with Itzhak Perlman at Carnegie Hall (Zankel).

He has served as a staff accompanist for the vocal program of the Steans Music Institute at Ravinia and in 2016 he was repetiteur for the Ojai Music Festival. In the summer of 2000, he held the Leonard Bernstein Fellowship in Piano at Tanglewood. The same summer, he took part in a special collaboration with the Paul Taylor Dance Company at the Jacob’s Pillow Festival in performances of solo Debussy.

He has taken an increasing interest in conducting, taking workshops with Donald Schleicher and Larry Rachleff, as well as serving as Assistant Rehearsal Conductor for Afterword, the critically acclaimed opera by George Lewis.

He has been on faculty at the University of Notre Dame since 2005. In addition to his service in the music department, he is faculty advisor to the student table tennis club.