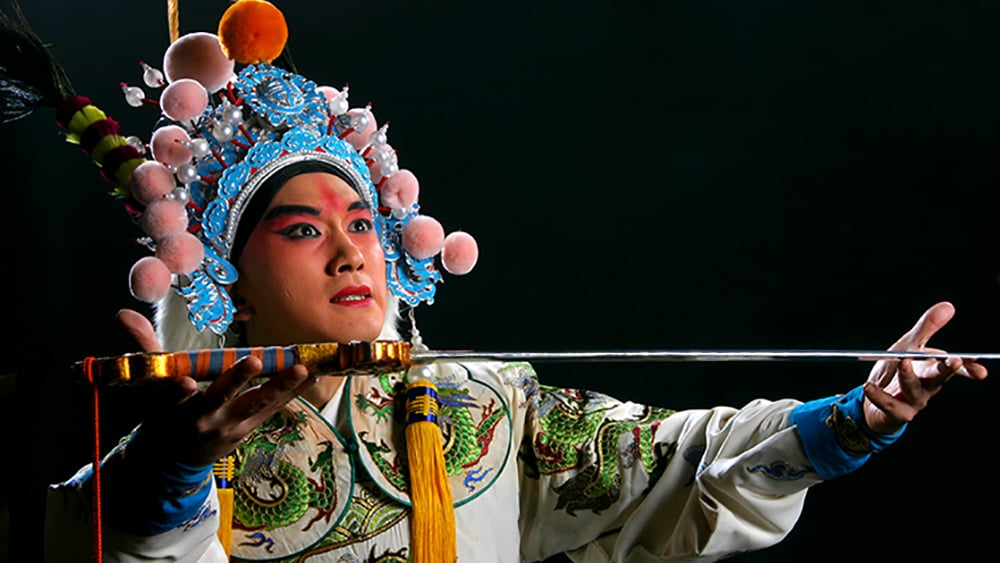 If you have ever heard Peking opera, you might think that one of the only things this style of singing has in common with Western opera singing is that they both contain the word “opera.”

China has developed many interdisciplinary art forms that all fall under the umbrella of “Chinese opera.” Peking opera, which formed during the 19th century, combines music, drama, dance, and acrobatics to create a single, unforgettable spectacle.

Fu began his training, like most Peking opera artists, at a very young age. “I was introduced to Peking opera by my father, who is a Peking opera musician, at the age of 6,” he said. “I started learning how to play the instruments. Later, I got into performing myself and I just fell in love with the art form.” At the ripe age of 15, Fu made his professional debut. To date, he has practiced his art for 30 years.

“To be a good performer,” he said, “you also have to have talent and really love what you do because of all the training that is involved.” And, while lots of training is to be expected for any professional performer, the types of training Fu and his colleagues have received are particularly diverse.

“Peking opera requires artists to have many different skills,” he explained. “There are four main categories: singing, speech, movement, and action.” The broad category of “movement” includes everything from hand, feet, eye, and other body movements, while “action” includes martial arts.

Shan added, “As an art form, Peking opera is very similar to what you would have seen centuries ago in Shakespeare’s theater. The performers carry the plot – you don’t need a lot of stage set up. A lot of the skills and techniques are actually drawn from ancient Chinese poems. A poem may describe two people who meet and who exchange a single glance. That moment is exaggerated on stage and becomes a part of the performance in a very poetic way.”

But one thing a poem can’t teach you, per se, is how to sing.

“Traditionally, students learn to sing orally from former performers,” Fu said. “There wasn’t a system or theory for teaching and producing sound. However, western opera singing has a whole set of theories and techniques that we have found very helpful.” 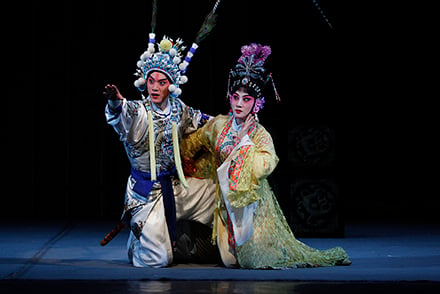 “In Western opera, singers often strive for a certain kind of ‘perfect’ sound. They train to develop a certain technique that allows for efficient vibration in the head and chest, and things of that nature.”

“Peking opera performers also strive for certain sounds,” Fu explained, “however we’re also looking for individualized singing styles. Sometimes a performer has developed a special sound that is very characteristic that is just for themselves.”

This individualistic approach to vocal production allows for a great deal of timbral variety. “A performer may choose only to use head vibration, while another may use almost only chest and very little head voice. There’s also another kind of singing technique called ‘the cloud covers the moon.’ Moonlight is very clear and bright. For performers who sing with this technique, their voice is not clear, it’s somewhat rough.”

“These include breathing techniques,” he said, “in particular supporting the breath from the belly. Though we also use a technique we call ‘dog breathing.’” He demonstrated by taking several quick, shallow breaths, panting like a puppy.

“Western techniques help us control our breath and project our voice better and bigger on stage. The theater company actually has music and singing teachers on staff to help performers perfect breathing and singing. We also invite vocal instructors from outside the company to teach.”

Shan explained, “Training today is quite different from traditional training over 100 year ago.” This is, in part, because, “we use these techniques in our opera training so that our students have more comprehensive ways to train themselves. In the old days, certain talents may have limited performers, but now there are ways we can improve those talents.” Besides the adoption of other singing techniques, the company’s training processes have evolved in other ways. Shan said that because Peking opera has “a lot of physical movement, performers have to be physically fit. We use a lot of technical analysis of students, including with new technology, to study movement and find the best ways for them to perform. This helps them move more efficiently and reduce the risk of injury.”

But what happens to performers who, like Fu, start training at 6, but who, unlike Fu, may not posses the skills or desire to have a professional career?

Shan said, “In China today, a lot of the young performers go to performing arts schools which teach a comprehensive curriculum including math, science, and engineering – many different subjects. This helps prepare them for other opportunities in the job market.”

When Peking opera first began in the late 19th century, however, this would not have been the case. Today, even in many Western conservatories, students receive some semblance of a liberal arts education. Often, though, training is so heavily focused on performance, that graduates find transitioning into other careers to be quite the challenge.

Luckily for Fu — and for audiences around the world who have enjoyed his artistry — Peking opera is and likely always will be his “day job.”

This interview with Fu Xiru and Shan Yue Jin was kindly translated by Z. J. Tong, President of the Chicago Chinese Cultural Institute.

Can’t Carry a Tune? Callas 2.0? Regardless of Skill, Singing Has Surprising Benefits
In the Age of the Visual Album, What Can Opera Learn from Beyoncé?
'The reach is exponentially larger': How Kamala Sankaram Brings New Audiences, Stories to Opera
Verismo Meets Lyrical Flow: Chicago Composer Creates Opera from Classic Nas Track
Sing Different: Why the Life of Apple's Steve Jobs Makes for Great Opera
Is This the Real Life? Opera Artists on Singing 'Verismo' With Muti & CSO