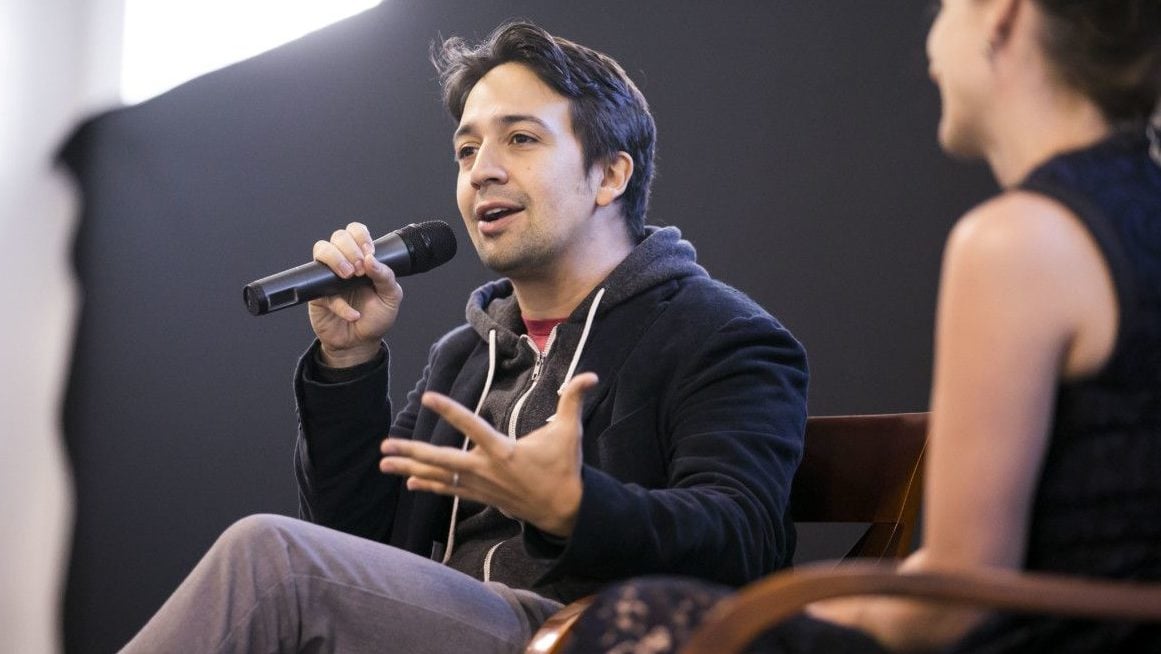 Lin-Manuel Miranda has impacted many lives through his Pulitzer Prize-winning work Hamilton: An American Musical. Recently, Miranda revealed how the arts have impacted him, saying that arts education, “saved my life.”

The room where it happened was a studio at Hubbard Street Dance Center in Chicago’s West Loop, home of Hubbard Street Dance. Since Hamilton has landed in Chicago, Miranda stopped by to speak with his college friend and Hubbard Street Director of External Affairs Suzanne Appel about the musical, his career, his journey with dance, and the importance of arts education in his life.

“The impact of arts education on my career is complete, total, and it saved my life. I had the good fortune to go to a magnet school in New York called Hunter and I went there from elementary through high school. There, my life was really changed by an elementary school music teacher named Barbara Ames. She and our shop teacher, Robert Sherman, would direct the sixth-grade play. It started when Barbara first arrived at Hunter and that was when I was in kindergarten; so the accident of timing could not be more perfect.

“The entire sixth grade culminates in doing a musical and the whole elementary comes to see the sixth graders perform. I saw West Side Story when I was in kindergarten. In first grade, I saw Fiddler on the Roof. In second, I saw a mash-up of the Wizard of Oz and The Wiz. By second grade, you’re already thinking, ‘What’s our play going to be when we’re the sixth graders?’ So my brain is wired to school culminating in a musical. In third grade, it was Peter Pan, fourth grade, Oklahoma, fifth grade, Bye Bye Birdie. We’re vibrating at this point with the question, ‘What is our sixth-grade play going to be?’

“For our sixth-grade play, Mr. Sherman and Ms. Ames basically ran out of age-appropriate musicals for elementary school children. They ended up going to a summer intensive for teachers where they worked on writing musicals with the kids. When school started, they said, ‘You’re not performing a sixth-grade play, you’re writing your own.’ So we replied, ‘No! We’ve been waiting our entire lives to do a musical that someone else wrote.’

“After about half a year of working on our own musical and crying, Mr. Sherman and Ms. Ames came up with a compromise. The compromise was that we would do the previous six years’ worth of musicals in addition to four student-written musicals and the show was called Four Plus Six, By Six Grade.  It ended up being four hours long. Poor Barbra Ames, I have no idea how she is not ridden with carpal tunnel syndrome; she played piano for the whole thing. I got to write a short musical, I played Conrad Birdie, a cowhand in Oklahoma, a son in Fiddler on the Roof, Captain Hook in Peter Pan, Bernardo in Westside Story, and an Addaperle backup in the Wizard of Oz/The Wiz.

“This is a very lethal dosage of musical theater at a very young age. I got to literally play all of the parts and I realized that it was the best time of my life. I got to play Conrad Birdie when I was small and twelve and when you’re Conrad Birdie every girl in the grade has to not only pretend to fall in love with you but faint as you sing! In that moment, wearing the gold lamé jacket that my abuela made for me, I thought ‘I am doing this for the rest of my life if they will let me!’

“Then that became my identity in high school due to a student-run theater group. I no longer thought of school in semesters; I thought of it as: we do a play in the fall, we do a musical in the winter, and we had a student-run theater group called Brick Prison which we would do in the spring. I was a writer with a deadline because I really wanted to get a play into Brick. That was the focus of my creative efforts for as long as I can remember.”

How has arts education impacted your life? Tell us in the comments.

Benny Kim and Grace Fong
In the Age of the Visual Album, What Can Opera Learn from Beyoncé?
10 Woman Conductors You Should Know
Fareed Haque and Friends [Rebroadcast]
Joshua Brown and Milana Pavchinskaya
9 Works by Women Writers We Want to See Adapted into Operas