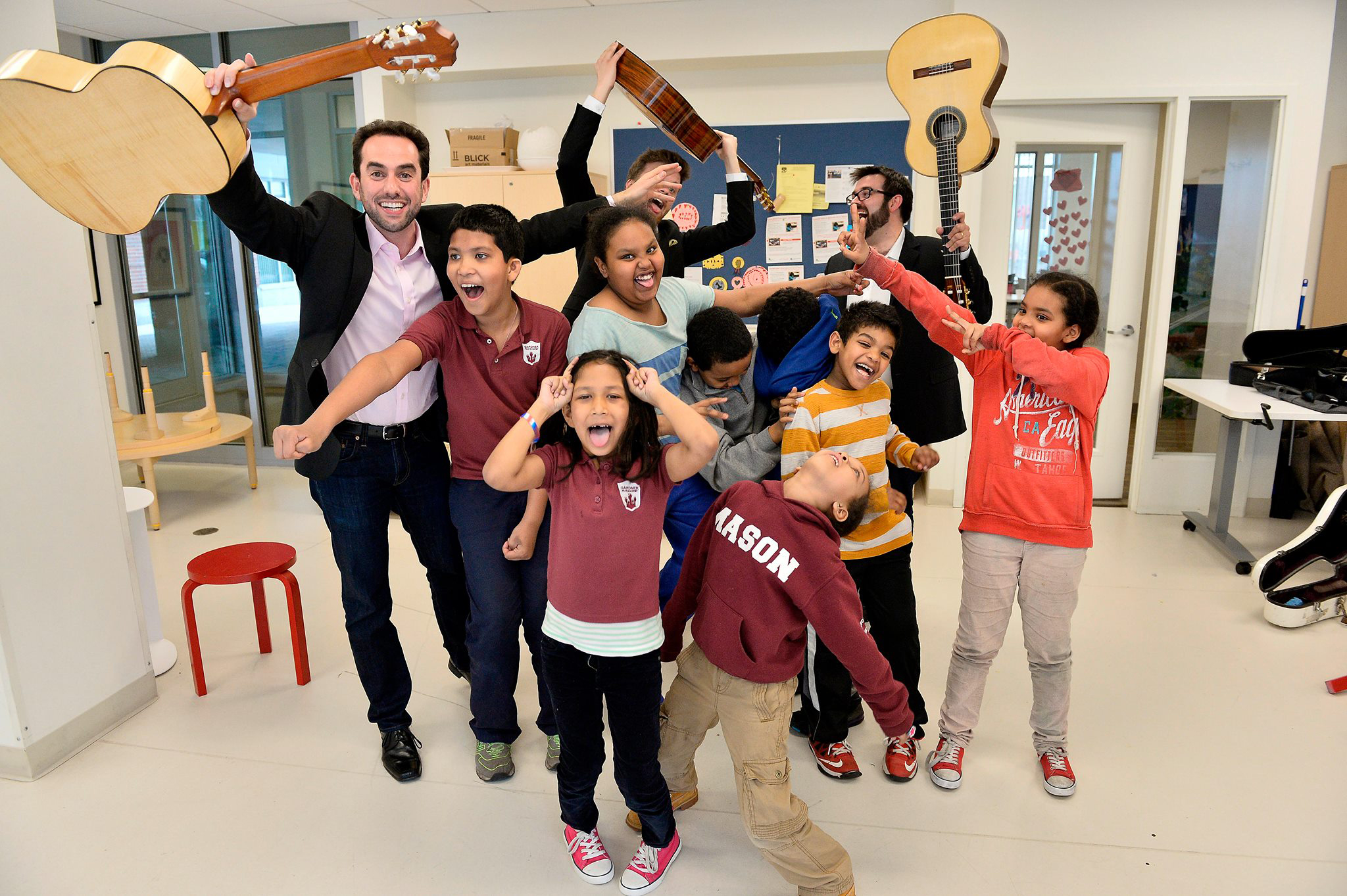 “I never thought in a million years that I would found a nonprofit,” guitarist Adam Levin said. Yet today he is working to bring “equitable access to the guitar in a sustainable way” through the Kithara Project, which he founded nearly a year-and-a-half ago.

The North Shore native’s talents have brought him all over the world, including to Spain on a Fulbright Scholarship. Now, he’s bringing his guitar to one of Mexico City’s most impoverished neighborhoods to give music to those who need it the most.

Why share the music of the guitar in Mexico? “Eventually you have to pick some place to start,” he said, “and we found the community in Yuguelito to be compelling.”

Yuguelito is located in Iztapalapa, which is Mexico City’s most populous borough and one of its most impoverished. According to the Guardian, one third of the residents live in poverty and lack clean drinking water.

Levin explained that Yuguelito was created when “approximately 1,000 families came together to form an improvised community on top of what was a landfill. The families have none of the basic amenities that some people take for granted.”

When Levin and his colleague, guitarist Matthew Rodhe, began conversations about how to give back to the community several years ago, they decided they wanted to make a contribution to the people of Yuguelito. Rodhe performed an outreach performance there shortly before the Kithara Project was officially founded, and saw potential for sustainable music education programs to make a positive impact.

It turns out that music is exactly what people in Yuguelito needed. “A survey was conducted in the community to see what the people there wanted most in order to have a fuller life,” Levin said, “and surprisingly, they said ‘music.’ They were also offered sports, computer technology, social services, a whole array of things, and they chose music.”

Though many kinds of music making can create change in individuals and in communities, the guitar has particular advantages. First and foremost, Levin explained, “no instrument costs as little as the guitar. You can get a cheap classical guitar for $30 – that’s nothing. Other instruments usually cost at least 10 times as much.”

The guitar is also a useful teaching tool because it is used in so many different styles of music and in cultures around the world. “Everybody knows the guitar through something, guaranteed. The guitar is an access point to music that is so profound,” he said. “It’s the most popular instrument in the world.”

The weekly programming they offer in Yuguelito includes both group and private lessons. Throughout the year, Kithara also gives students immersive experiences through intensive residencies with professional guitarists.

“We’ve found it’s very important to provide the students with opportunities to see other performers so that they have goals to work towards. Then maybe they can think, ‘Maybe one day, I can perform like her or him.’ It gives them perspective through example.”

“We’ve found it’s very important to provide the students with opportunities to see other performers so that they have goals to work towards. Then maybe they can think, ‘Maybe one day, I can perform like her or him.’ It gives them perspective through example.”

While the Kithara Project also serves communities in Boston, where Levin is now based, the challenges the organization faces in Yuguelito are exceptional. “Unlike in Boston, where we are fortunate to work in a very nice community center, in Mexico, there’s no administration to help run this. We’re creating things from scratch. We bring the guitars, we bring the teachers – everything.”

“Our first year,” Levin said, “we ran into a lot of problems. How do you inspire young people to keep attending in a community like this? What has helped is that we’ve been very assiduous in choosing leaders who can not only teach the guitar but who can inspire change, be uplifting, and who can be great human spirits. We pride ourselves on being a group that sincerely believes in the transformative power of music and its ability to create change.”

Sing Different: Why the Life of Apple's Steve Jobs Makes for Great Opera
Fareed Haque and Friends [Rebroadcast]
Ryan McKinny on His Friendship, Artistic Partnership With a Death Row Inmate: 'We’re Human Just Like Him'
In the Age of the Visual Album, What Can Opera Learn from Beyoncé?
Capturing the Chevalier, One of the Most Remarkable Stories in Classical Music
Bach, Borge, Biden: Ed O’Keefe, the CBS News White House Correspondent Who Came To Play