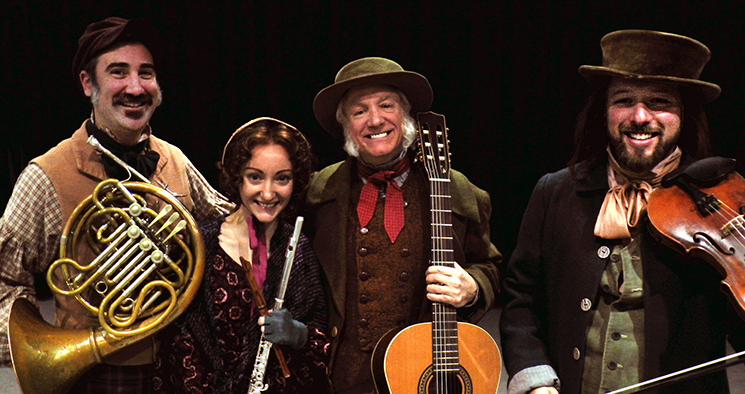 The musicians in Goodman Theatre’s A Christmas Carol, who also perform together as Smoking Bishop

A Christmas Carol, by Charles Dickens, is always a holiday favorite. Whether or not you love to read the original novella or see adaptations of it on stage or the silver screen, you may have wondered at some point, “What Christmas carols would characters in A Christmas Carol have actually heard?”

One clue comes from the original tale by Dickens. A passage in the novella reads:

The owner of one scant young nose, gnawed and mumbled by the hungry cold as bones are gnawed by dogs, stooped down at Scrooge’s keyhole to regale him with a Christmas carol: but at the first sound of: “God bless you, merry gentleman! May nothing you dismay!” Scrooge seized the ruler with such energy of action, that the singer fled in terror, leaving the keyhole to the fog and even more congenial frost.

“God Rest You Merry, Gentlemen” has existed in some form since at least the 16th century, so it’s not surprisingly that Dickens referenced the carol his 19th century tale. Clearly, Scrooge doesn’t care much for it!

We asked the musicians performing in A Christmas Carol at the Goodman Theatre what holiday music we might’ve heard in the streets of London during the time of Charles Dickens. In the video below, watch them share a few holiday tunes from Christmas Carols, Ancient and Modern published in London a decade before A Christmas Carol. You may be surprised that you recognize some!

The musicians in Goodman’s A Christmas Carol also perform as group outside of the production called Smoking Bishop, which gets its name from a popular beverage mentioned by name at the end of the novella:

“A merry Christmas, Bob!” said Scrooge, with an earnestness that could not be mistaken, as he clapped him on the back. “A merrier Christmas, Bob, my good fellow, than I have given you for many a year! I’ll raise your salary, and endeavour to assist your struggling family, and we will discuss your affairs this very afternoon, over a Christmas bowl of smoking bishop, Bob!

What’s in a “bowl of smoking bishop,” you ask? The recipe according to Modern Cookery, published in 1845, tell us to:

Make several incisions in the rind of a lemon, stick cloves in these, and roast the lemon by a slow fire. Put small but equal quantities of cinnamon, cloves, mace, and allspice, with a trace of ginger, into a saucepan with half a pint of water : let it boil until it is reduced one-half. Boil one bottle of port wine, burn a portion of the spirit out of it by applying a lighted paper to the saucepan; put the roasted lemon and spice into the wine ; stir it up well, and let it stand near the fire ten minutes. Rub a few knobs of sugar on the rind of a lemon, put the sugar into a bowl or jug, with the juice of half a lemon (not roasted), pour the wine into it, grate in some nutmeg, sweeten it to the taste, and serve it up with the lemon and spice floating in it.

Bishop is frequently made with a Seville orange stuck with cloves and slowly roasted, and its flavour to many tastes is infinitely finer than that of the lemon.

A big bowl of smoking bishop sounds like the perfect way to warm  up after an evening of caroling door-to-door! Curious to hear more music from the time of A Christmas Carol? Find a digital version of Christmas Carols, Ancient and Modern on IMSLP.