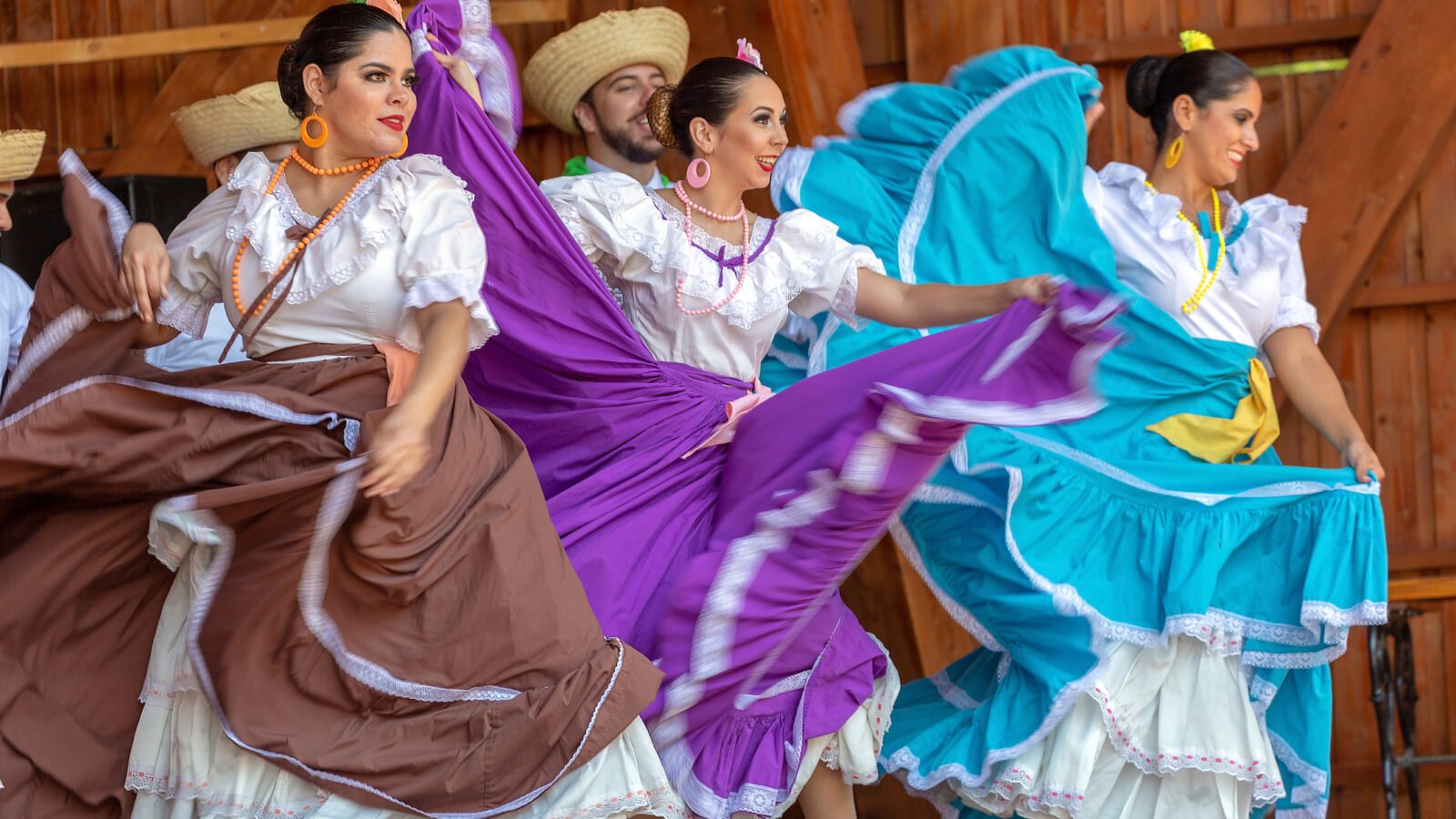 Arroz con gandules – a version of beans and rice using pigeon peas – is a staple of Puerto Rican cuisine. Because the dish is so affordable to prepare, it nourishes people from all walks of life and economic backgrounds. Bomba and plena, two forms of Puerto Rican folk music, have similarly nourished the commonwealth by uplifting working-class narratives and uniting Taíno, African, and European traditions. Though bomba and plena are often mistaken as one in the same because of their musical qualities, connections to dance, and shared diasporic heritage, each has its own history and musical identity.

In the 17th century, bomba music developed as a means of political and spiritual resistance among enslaved people from West Africa working on the island’s sugar plantations. Bomba expressed both the frustrations of labor and the joys of forming community during an oppressive Spanish colonial regime. As the transatlantic slave trade brought diverse West African diasporic populations to the Carribean by way of forced migration, bomba evolved into a tradition representative of Afro-Puerto Rican culture.

Bomba has several distinct rhythms that differ by region, and most are variations on three fundamental patterns. The yubá rhythm is a triple meter, while sicá and holandés are duple meter rhythms. Learn how to play some of these rhythms in the video below.

Drawing from West African call-and-response musical forms, another key feature of bomba is the interplay between drummer and dancer. As demonstrated in the video below of a bomba performance in Loiza, Puerto Rico, the dancer, usually wearing a long skirt, challenges the drummer to a rhythmic battle, creating intricate accents through sharp movements.

The drums heard in bomba are also a product of Puerto Rico’s colonial history. Barriles de bomba are built from wooden rum storage barrels – a relic of the same triangular trade system responsible for establishing slavery in the Americas. These drums serve as a tangible reminder that bomba originated as an art form for, and by, sugar plantation workers.

A bomba performance involves at least two barriles: The lead drum, called the primo or subidor, is tuned to a higher pitch. The musician playing this drum improvises based on the dancer’s syncopated movements. The buleador, tuned to a lower pitch, maintains a steady beat. Other instruments central to bomba music include cuá – two wooden sticks that can strike either the side of a barríl or a piece of hollowed wood – and a single maraca.

Roughly 300 years after bomba music was first created, plena traditions began to take shape in Ponce, one of the island’s southernmost cities. At this time – the turn of the 20th century – Puerto Rico was transitioning from Spanish to U.S. colonial occupation. Much like bomba, plena served as an outlet for the working class to set the concerns of their day to song. Because of this, plena is often nicknamed el periódico cantado (the sung newspaper).

Joselino “Bumbún” Oppenheimer, considered by many to be the father of plena music, worked as a plowman, tilling fields and manning oxen. His compositions drew from labor both thematically and musically. Oppenheimer wrote lyrics about (and sung by) his fellow plowboys, and composed rhythms that mimicked cattle hooves and plows.

After the abolition of slavery in 1873, newly freed slaves sought out economic opportunities in cities like Ponce. The ensuing exposure to European and Taíno culture among the African originators of plena influenced the music’s development as well, creating a quintessentially Puerto Rican art form. Viento de Agua, a bomba, plena, and boricua fusion band, performs their original plena, “Quinto y Tumbador,” below.

As with bomba, percussion lies at the heart of plena music. The pandereta, a hand drum that resembles a tambourine without cymbals, is the instrument most characteristic of plena. It keeps the beat as call-and-response vocals drive plena’s storytelling. Multiple panderetas comprise a plena ensemble, each playing a specific role. The seguidora maintains a steady pulse while the requinto accents specific beats in each rhythm. The guïro, a Taíno instrument, is a hollowed gourd with notches. In plena music, the guïro player can scrape the gourd in a fixed pattern or employ more complex rhythms as a soloist.

Matos, in an interview with Smithsonian Folkways, said, “In Puerto Rico, you go to black and humble communities and you’re going to find bomba and plena without a doubt.”

Bomba and plena, each with its own distinct contributions to Puerto Rican culture, express similar narratives of the colonized working class creating community through music. And both can fill you up and warm your soul, just like a plate of arroz con gandules.