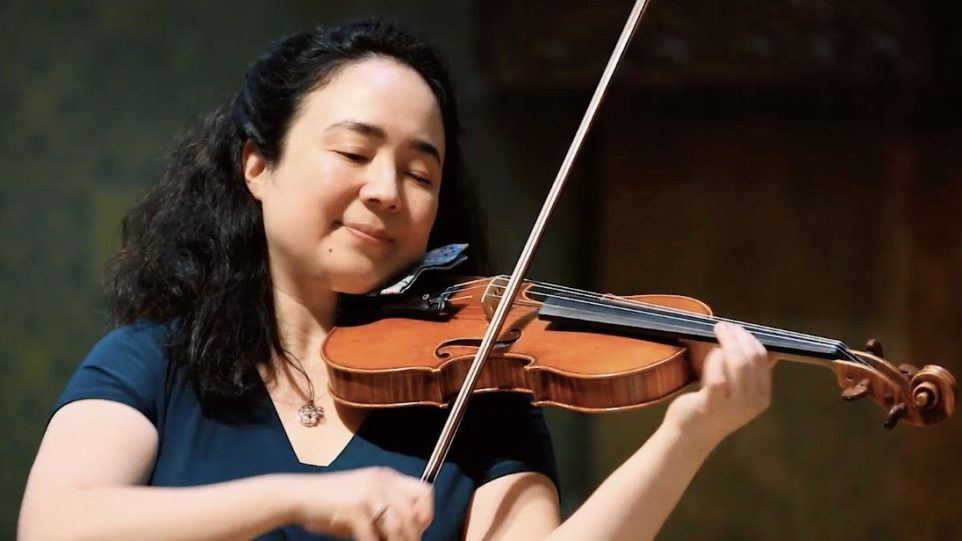 Violinist Sara Su Jones is joined by collaborative pianist Tatyana Stepanova for a live recital from the Levin Performance Studio.

Sara Su Jones, violin
Hailed as a “violinist of enviable gifts” by a Chicago Sun-Times music critic, Sara Su Jones is an award-winning violinist who has performed as a soloist throughout North America, Europe, and Asia. Sara Su appears regularly in her native Chicago in such venues as Preston Bradley Hall (Chicago Cultural Center), Fourth Presbyterian Church (Artists in Recital Series), PianoForte, Ganz Hall, St. James Cathedral, and Quigley Chapel (Second Saturday Concert Series); her solo recitals have been recommended by the Chicago Tribune’s music critic, John von Rhein. In recent seasons, she has given recitals in London, England; Reykjavík, Iceland; Washington, DC; Massachusetts; California; Wisconsin; and Indiana. Her Icelandic concerts include a recital on the main stage at Harpa, the home of the Iceland Symphony, for an audience of over 500, as well as recitals for ambassadors and cultural leaders, including former Icelandic president Vigdís Finnbogadóttir, at the Residence of the US Ambassador to Iceland. Her recent engagements have included a live broadcast on WBEZ, Chicago’s public radio station, and performances in London (at the historic Temple Church and Inner Temple Parliament Chamber).
At age 17, Sara Su received an A.R.C.M. certificate in violin performance from the Royal College of Music in London and was heard as a soloist on BBC Radio. A top prizewinner in various music competitions in both England and the U.S., including that of the Harvard Musical Association, Sara Su served for three years as assistant concertmaster of the symphony orchestra at Harvard, and since 2006 has served as concertmaster of the Chicago Bar Association Symphony Orchestra (CBASO), with which she has performed as a concerto soloist. From the
age of 7 onward, she studied with Mark Zinger, a former student and colleague of David Oistrakh. Sara Su performs on a 2017 violin made for her by the Icelandic luthier Hans Johannsson.
Sara Su holds an A.B. in Economics, magna cum laude and Phi Beta Kappa, and a J.D., cum laude, both from Harvard. Formerly a diplomatic intern at the US State Department and US Embassy Moscow, she worked as a management consultant at McKinsey & Company in New York and as a trusts and estates lawyer at Ropes & Gray LLP in Boston. In 2004, Sara Su founded Elite Educational Coaching; she now coaches students throughout the US and internationally in person and via Skype on test prep, writing skills, and college admissions. See www.sarasujones.com. _________________________________________________________________
Tatyana Stepanova, piano
Tatyana Stepanova is a noted performer and teacher, praised by the Chicago Tribune as a “fine” and “persuasive” pianist. After winning first prize in the Russian National Piano Competition in 1981, Tatyana taught piano at the Tchaikovsky State Conservatory in Kiev, Ukraine, for nearly a decade before moving to Chicago.
An active chamber musician, Tatyana has performed with members of the Chicago Symphony Orchestra, the orchestra of the Lyric Opera of Chicago, and Chicago Chamber Musicians. Her concert appearances also include Dame Myra Hess Memorial Concerts, live 98.7 WFMT broadcasts, and Rush Hour Concerts at St. James Cathedral, as well as performances with the Storioni Ensemble and as a soloist with Concertante di Chicago.
Much of her career has been devoted to collaborative music-making, particularly with violinists. Since 1992, Tatyana has accompanied the faculty and students of Northwestern, DePaul, and Roosevelt Universities; she has also been involved for many years with The Stradivari Society, performing with world-class artists. In addition, she has participated as an accompanist in the Oistrakh, Paganini, Wieniawski, and Indianapolis International Violin Competitions, as well as the Stulberg International String Competition.
Tatyana maintains a private piano studio in Mount Prospect for students of all ages. Her piano students have won prizes in numerous competitions, including the Chicago Symphony Orchestra Youth Auditions, the Walgreens National Concerto Competition, and the DePaul Concerto Festival for Young Performers.
In addition, Tatyana is a sought-after chamber-music coach whose ensembles have earned national recognition. In recent years, ensembles she coached won Grand Prizes in the Discover and Barnett national chamber-music competitions in addition to earning awards in the Fischoff National Chamber Music Competition and the University of Michigan’s M-Prize Competition. Tatyana is on the faculty at Midwest Young Artists (MYA), teaching the sonata class and coaching chamber groups, and she also teaches at the elite Academy of the Music Institute of Chicago.

Biographies courtesy of the artists.

Improvisation, Op. 21, No. 1, by Dmitri Kabalevsky
(from the film “St. Petersburg Night”)

In the Style of Albeniz, Op. 52, by Rodion Shchedrin
arr. Dmitri Tsyganov