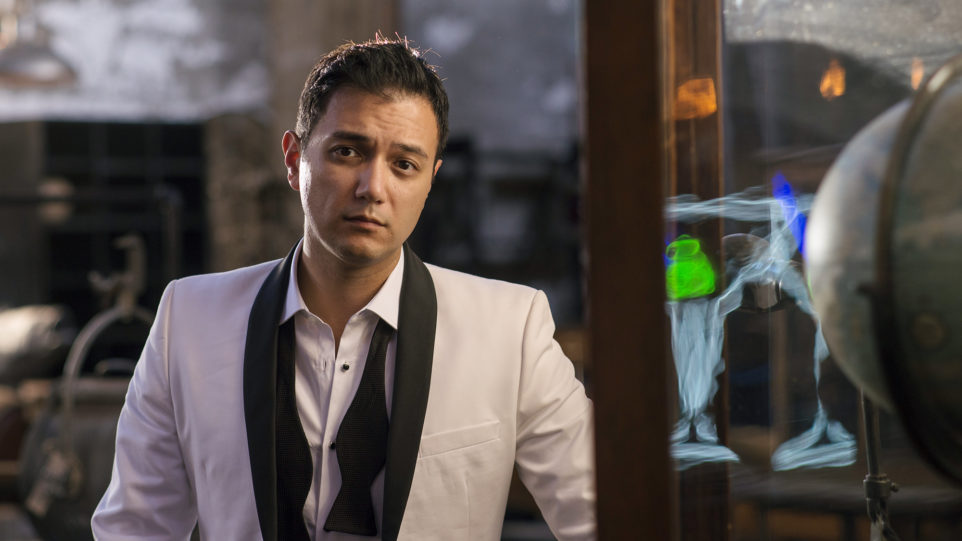 Lyric tenor Nicholas Phan joins us once again in the Fay and Daniel Levin Performance Studio on this Live from WFMT.

Described by the Boston Globe as “one of the world’s most remarkable singers,” American tenor Nicholas Phan is increasingly recognized as an artist of distinction. Praised for his keen intelligence, captivating stage presence and natural musicianship, he performs regularly with the world’s leading orchestras and opera companies. Also an avid recitalist, in 2010 he co-founded the Collaborative Arts Institute of Chicago (CAIC) to promote art song and vocal chamber music.

Phan once again launches his new season in Chicago, curating CAIC’s seventh annual Collaborative Arts Festival. This year’s three-day festival (Sep 5 – 8), “The Song as Drama,” will examine the narrative power of the song cycle and the ability of song to tell epic stories with minimal forces. Other highlights of his 2018-19 season are two role debuts: Eumolpus in Stravinsky’s Perséphone, with Michael Tilson Thomas and the San Francisco Symphony; and the title role in Handel’s Jephtha, with Boston Baroque and Martin Pearlman. The title role in Bernstein’s Candide, with Marin Alsop and the Israel Philharmonic, will mark his debut in Israel. In addition to three programs with the San Francisco Symphony, he will return to major orchestras across the country including the Chicago Symphony Orchestra, Dallas Symphony Orchestra, Cincinnati Symphony Orchestra, St. Louis Symphony Orchestra, and Colorado Symphony. In November he will sing the first of many outings of Schubert’s Die schöne Müllerin this season, as he gives the world premiere of Antoine Plante’s arrangement of the cycle for full orchestra, with Mercury, the Houston-based orchestra of which Plante is the founder. A celebrated recording artist, Phan will be heard on two forthcoming recordings: Berlioz’s Roméo et Juliette with Tilson Thomas and the San Francisco Symphony, (recorded in June 2017); and Handel’s Joseph and His Brethren (recorded in December 2017) with Philharmonia Baroque and Nicholas McGegan, singing the roles of Simeon and Judah.

Phan’s most recent solo album, Illuminations, was released on Avie Records in April 2018. His previous solo album, Gods and Monsters, was nominated for the 2017 Grammy Award for Best Classical Vocal Solo Album. His other previous solo albums, A Painted Tale, Still Fall the Rain and Winter Words, made many “best of” lists, including those of the New York Times, New Yorker, Chicago Tribune and Boston Globe. Phan’s growing discography also includes a Grammy-nominated recording of Stravinsky’s Pulcinella with Pierre Boulez and the Chicago Symphony, the opera L’Olimpiade with the Venice Baroque Orchestra, Scarlatti’s La gloria di primavera with Philharmonia Baroque, an album of Bach’s secular cantatas with Masaaki Suzuki and Bach Collegium Japan, Bach’s St. John Passion (in which he sings both the Evangelist and the tenor arias) with Apollo’s Fire, and the world premiere recordings of two orchestral song cycles: The Old Burying Ground by Evan Chambers and Elliott Carter’s A Sunbeam’s Architecture.

An avid proponent of vocal chamber music, he has collaborated with many chamber musicians, including pianists Mitsuko Uchida, Richard Goode, Jeremy Denk, Graham Johnson, Roger Vignoles, Inon Barnatan, Myra Huang and Alessio Bax; violinist James Ehnes; guitarist Eliot Fisk; harpist Sivan Magen; and horn players Jennifer Montone, Radovan Vlatkovic and Gail Williams. In both recital and chamber concerts, he has been presented by Carnegie Hall, London’s Wigmore Hall, the Metropolitan Museum of Art, the Chamber Music Society of Lincoln Center, the Philadelphia Chamber Music Society, Atlanta’s Spivey Hall, Boston’s Celebrity Series, and the Library of Congress in Washington, DC. In 2010, he co-founded the Collaborative Arts Institute of Chicago, an organization that promotes the art song and vocal chamber music repertoire of which he is Artistic Director.

A graduate of the University of Michigan, Phan is the 2012 recipient of the Paul C Boylan Distinguished Alumni Award. He also studied at the Manhattan School of Music and the Aspen Music Festival and School, and is an alumnus of the Houston Grand Opera Studio. He was the recipient of a 2006 Sullivan Foundation Award and 2004 Richard F. Gold Career Grant from the Shoshana Foundation.  In 2018, Phan was appointed to the faculty of DePaul University, where he serves as an adjunct member of the voice faculty.

Selections from Three Songs of the War, by Ives
In Flanders Fields
He is there!

Ludlow and Teme, by I. Gurney
When Smoke Stood Up from Ludlow
Far in a Western Brookland
‘Tis time, I Think, by Wenlock Town
Ludlow Fair
On the Idle Hill of Summer
When I Was One-and-Twenty
The Lent Lily

Selections from Songs of Travel, by R. Vaughan Williams
Youth and Love
The Infinite Shining Heavens
Whither Must I Wander

Six Songs from A Shropshire Lad, by G. Butterworth
“Loveliest of Trees”
“When I was One-and-Twenty
Look not in my Eyes
Think no more, Lad
The Lads in their hundreds
Is my Team Ploughing?

To Gratiana Dancing and Singing, by W. Denis Browne