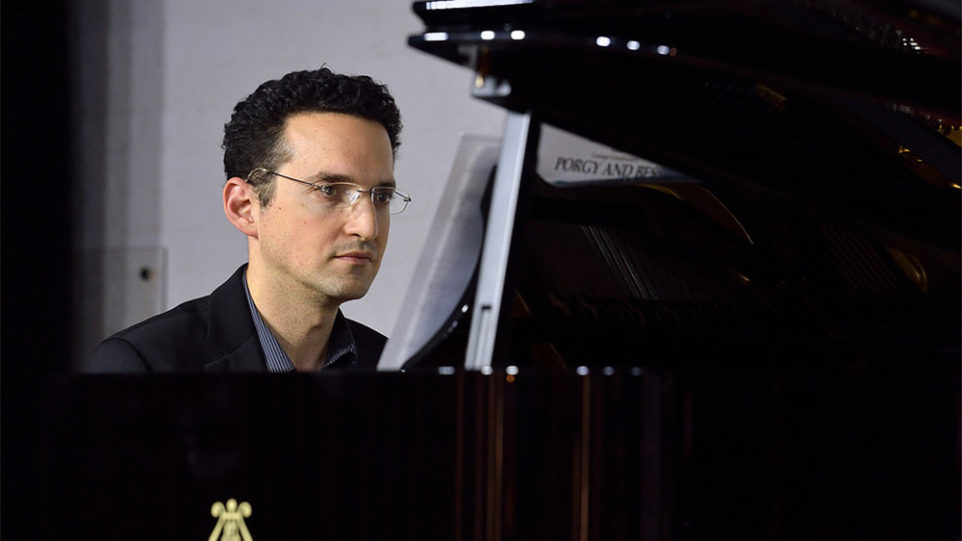 Pianist Daniel Schlosberg returns to the Levin Performance Studio with Laura Strickling, soprano to present a recital of solo piano music and song.

Daniel Schlosberg has been described as an “expert pianist” (Boston Globe), and his performances have been praised for their “intellect and passion” (Washington Post). He enjoys a multifaceted relationship with the Chicago Symphony Orchestra. In addition to appearing on numerous chamber music and new music concerts, he was a featured soloist in subscription performances of Messiaen’s “Trois Petites Liturgies”, for which John von Rhein in the Chicago Tribune wrote: “Daniel Schlosberg played the daunting piano part splendidly”; and Lawrence A. Johnson of the Chicago Classical Review wrote of “a prominent, challenging piano part, played here with great fire and conviction by Daniel Schlosberg in a notable CSO debut.”
In the new music realm, he collaborates frequently with Eighth Blackbird, and was a founding member of Yarn/Wire. He has recorded for the Albany, Bridge, Centaur, New World, Nimbus and Permelia labels. His latest solo album is “Gaul Me Maybe: French Baroque Keyboard Music,” and his latest collaborative release was of Lei Liang’s “Inkscape” for Percussion Quartet and Piano, with Third Coast Percussion. He is also passionately devoted to art song, and directs the Baltimore Lieder Weekend, held each October. Previously, he served as a vocal accompanist at the Steans Music Institute at Ravinia.
Recent projects include Mahler/Zemlinsky Symphony No 6 at the National Gallery of Art and Ravinia, and Steve Reich’s Music for 18 Musicians at the University of Michigan and Interlochen. Since 2005, Daniel Schlosberg has been on faculty at the University of Notre Dame, where he is also faculty advisor to the Table Tennis Club.
Laura Strickling has been praised by The New York Times for her, “flexible voice, crystalline diction, and warm presence.” Celebrated for her work on the concert and recital stage, she has performed at Carnegie Hall, Avery Fisher Hall at Lincoln Center, the Kennedy Center, National Sawdust, Trinity Church on Wall Street, Washington National Cathedral, the Opera America Center, Mexicoliederfest, Liederfest in Suzhou (China), and the Afghanistan National Institute of Music.Her recording of James Matheson’s Times Alone with Yarlung Records was hailed by MusicWeb International for, “shapely, nuanced voicings and emotional urgency…a striking directness.” New Voices, the Billboard Classical Top-Ten-selling CD including her recording of Glen Roven’s The Vineyard Songs with pianist Michael Brofman was acclaimed by Opera News, “Laura Strickling’s lovely diction and warm, clear sound bring attractive immediacy to this cycle.” She can also be heard on the “New American Song @SongFest” CD, performing Jake Heggie’s Edna St. Vincent Millay with pianist Dimitri Dover and on The Garden: Songs and Vocal Chamber Music of Tom Cipullo, performing his landmark song cycle Of a Certain Age with pianist Liza Stepanova. Her upcoming recordings include her first solo CD project of American art song with pianist Joy Schreier.

A devoted interpreter of art song, Laura Strickling curated an anthology of 25 contemporary art songs for soprano, published by New Music Shelf. She is on the roster of the Brooklyn Art Song Society, and has appeared with Lyric Fest of Philadelphia, Joy in Singing, Trinity Concerts at One, the American Liszt Society, Baltimore Lieder Weekend, the Half Moon Music Festival, Concerts on the Slope, Art Song at the Old Stone House, and the Brooklyn New Music Collective.

Biographies courtesy of the artists.

On This Island (Auden), by Benjamin Britten
Let the Florid Music Praise!
Now the Leaves are Falling Fast
Seascape
Nocturne
As it is, plenty

Three Dickinson Songs for soprano and piano, by Andre Previn
As Imperceptibly as Grief
Will There Really Be a Morning?
Good Morning Midnight


Times Alone for soprano and piano, by James Matheson
I have walked along many roads
Last night, as I was sleeping
Clouds ripped opened
The wind, one brilliant day
Is my soul asleep