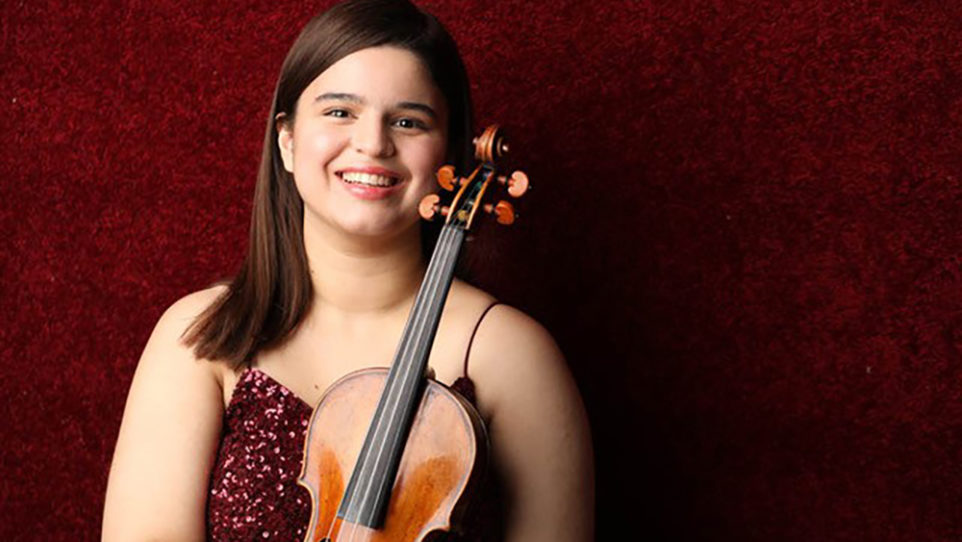 Equally at home as a solo, chamber, and orchestral player, 18-year-old Rabia Brooke is an award-winning violinist whose performance experiences span a wide range of repertoire, styles, and collaborators. This season Rabia performs at the Aspen Music Festival, the Musicians Club of Women, and the Northwest Symphony Orchestra. Rabia has also performed chamber music in the Pilgrim Chamber Players Series and the Fine Arts Music – Performance and Scholarship Series Special Event in Norte Ecole Hall, as well as in solo appearances at Orchestra Hall with the Chicago Youth Symphony Orchestra and on WFMT’s Introductions.

Last season, Rabia was honored to perform under the baton of Maestro George Stelluto at Ravinia with the Peoria Symphony Orchestra at the Bernstein Festival, participated in the Musique Dans la Gers Festival in France, performed with Rachel Barton Pine at the Buckingham Salon Series, performed with Fifth House Ensemble in Chicago, and was a soloist for Make Music Now Series and Piano Forte Studios. Previous projects include: tour of Central Europe with the Chicago Youth Symphony Orchestra (CYSO); Curtis SummerFest serving as concertmaster of the YASP Orchestra under the baton of Joshua Gersen; collaborations with Formosa Quartet and Black Oak Ensemble. Other projects include: European tour with Daniel Rowland for the filming of a Beethoven documentary; premiering and recording Athena Triumphant String Quartet by local award-winning composer, Stacy Garrop; performing solo and chamber works with Grammy-nominated banjoist Noam Pikelny and bluegrass band, Special Consensus for Kellogg.

Rabia started playing violin at age three and has been honored to study with Lei Hou of the Chicago Symphony Orchestra and Alexander Belavsky of the Lyric Opera Orchestra. She has performed in master classes for Catherine Cho, Daniel Rowland, Rachael Kolly d’Alba, and Ani Kavafian. She has also received mentorship from pianist Winston Choi and the late Deborah Sobol. Currently, she studies with Desirée Ruhstrat of the GRAMMY-nominated Lincoln Trio. She serves as the co-concertmaster of the CYSO.