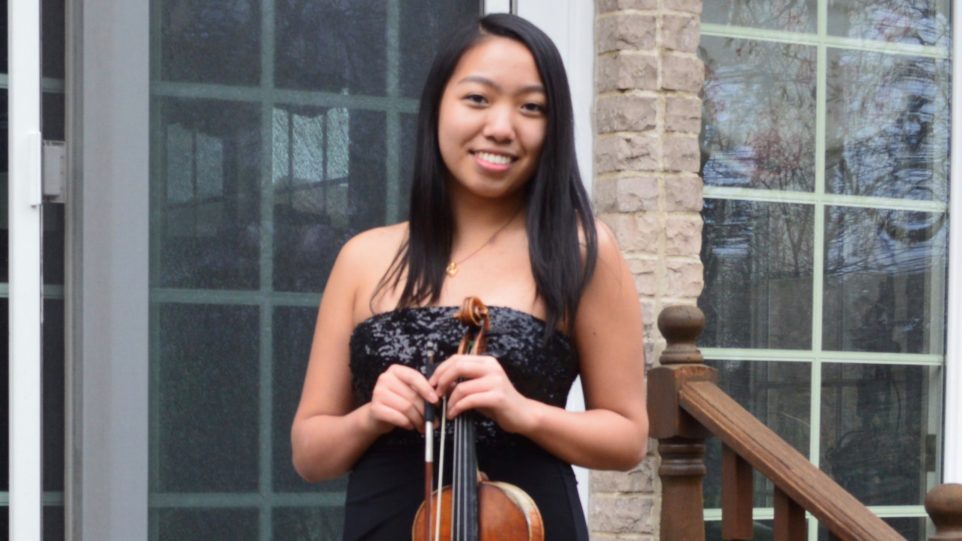 On Saturday’s live broadcast, we feature 18-year-old violinist Rachel Hsu. Rachel is a senior at New Trier High School and currently studies violin with Desirée Ruhstrat. Rachel began playing violin at age three, and since, she has won numerous awards, making her solo debut at age seven in 2009 with the Oistrakh Symphony Orchestra as the winner of the DePaul Concerto Festival. She has won top prizes in the Confucius Music Festival, Society of American Musicians’ Violin competition, Sejong Music Competition, Illinois American String Teacher Association’s Concerto Competition, Walgreens National Concerto Competition, was a finalist in the CYSO Concerto Competition in 2017 and 2018, and was a YoungArts Winner in 2018. She has been featured as both a violin and piano soloist on WFMT’s Introductions, Music in the Loft, the Young Steinway Concert Series, WGN’s Chicago Live radio program, Pilgrim Chamber Players’ Stars of Tomorrow, ACDA’s Unite in Song, Ravinia’s Kraft Kids Concert Series, and performed alongside The Piano Guys in 2015 at the Ravinia Pavilion and again in 2018 at the Chicago Theater.

As a chamber musician, Rachel has also participated and won prizes in the Saint Paul String Quartet Competition, Fischoff National Chamber Music Competition, the Discover National Chamber Music Competition, Barnett Chamber Music Competition, and has performed for Ravinia’s Reach*Teach*Play outreach program for young audiences. Rachel became a member of the Symphony Orchestra and Encore Chamber Orchestra in Chicago Youth Symphony Orchestras (CYSO) in 2013. She served as concertmaster durin the CYSO’s tour to China in 2014 and Central Europe in 2017 and has worked with Yo-Yo Ma, performed with the Blue Man Group at the Jay Pritzker Pavilion in Millennium Park, performed with Third Coast Percussion at the Harris Theater, performed at the Chicago Theater with Ben Folds, performed at the Midwest Clinic with Rachel Barton Pine, performed alongside Anthony and DeMarre McGill at Chicago Symphony Center as part of the American League of Orchestras conference, performed alongside Second City, performed at the United Center during the halftime show at a Chicago Bulls game and in the Chicago Bulls’ Holiday Card video in 2016, and will tour the Baltics with CYSO in the coming summer.

As concertmaster of the New Trier High School Symphony Orchestra, she toured Italy in 2016 and performed at Carnegie Hall in 2018. Additionally, she has participated in the Chicago Youth in Music Festival under Riccardo Muti since 2014 and was the concertmaster of IMEA’s All-State Honors orchestra under Cliff Colnot in 2017. Rachel also joined the Filarmonica Joven de Colombia along with the Lincoln Trio and various soloists on their tour in Colombia led by Dante Santiago Anzolini in 2016. In 2017, she participated in and was second violin principal at Curtis’ Young Artist Summer Program, performed in France as part of the festival Musique dans le Gers as well as in 2018, and she also performed at Carnegie Hall as a member of the New York String Orchestra Seminar in 2017 under Jaime Laredo, performing alongside legendary musicians Richard Goode and Pamela Frank.

In summer of 2019, Rachel will attend the Aspen Music Festival and School on fellowship, studying with Masao Kawasaki.