Andrew Bird is not an artist that fits in any box. Using his violin and virtuosic whistle, Bird genre-jumps from indie rock to jazz, and from folk to classical. Born in Lake Forest, Illinois, Bird recalls, “My mom would have WFMT on all the time… My dad listened to Merle Haggard.”

Bird began learning classical violin from the Suzuki Method at the age of four. He says, “The fundamental principle is that you learn music as you would learn language. So, when I heard other musical languages like non-western or jazz I could learn them intuitively. Playing by ear creates a direct pathway from what you hear to what you play and that’s how I always work.”

He grew up in a Northern suburb of Chicago, Lake Forest, and nurtured his love of classical music by working the gate at the Ravinia Festival, attending the Interlochen Arts Camp, and being a member of the Chicago Youth Symphony Orchestras. He graduated from Northwestern University with a bachelor’s in violin performance in 1996 and has released 12 solo albums, collaborated with many artists including the LA Philharmonic, Esperanza Spalding, and The Handsome Family, and has written music for both TV and film.

Bird has a new album out, the melodic, dark, humorous, My Finest Work Yet, and is on a national tour. Ahead of his July 16 performance at the Chicago Theatre, Bird spoke with WFMT about the importance and influence of classical music on his work and compiled a Spotify playlist of some of his favorite classical music recordings.

WFMT: What is your first memory of music?

Andrew Bird: I remember my dad holding my first violin above my head just out of reach while he tried to teach a 4-year-old me to be responsible with this valuable thing. My first memories of music were of playing “Hot Cross Buns and “Twinkle Little Star,” not so much as a listener.

WFMT: When did the violin come into your life and was there a time when you knew it was ‘your’ instrument?

Bird: To be honest it was not a conscious thing. My mom took me to Suzuki lessons twice a week and she learned to play with me at first.

My real passion for it didn’t kick in until I was 13-14. Adolescence and high school are tough times for most people. I could already play violin well by then so I thought I should throw myself into this completely and it became more part of my identity. That’s when I started practicing hours and hours a day. Once I started playing some of the big violin concertos, it became a very dramatic struggle to try to master these pieces, which matched and helped me deal with the feelings of being young and in high school.

WFMT: How has the violin shaped your sound and composing? Would have it been different if you chose a guitar, oboe or piano as your main instrument?

Bird: Absolutely. I play a fretless, linear, effectively vocal instrument. If I played piano or guitar, I think my brain would be wired differently with such geometric chordal structure. When composing most of it starts with unconscious whistling without an instrument in-hand, I’ll go to the violin and improvise some music loops for counterpoint. Then I use guitar to develop my lyrics. There is a reason guitar is a go-to for songwriters. 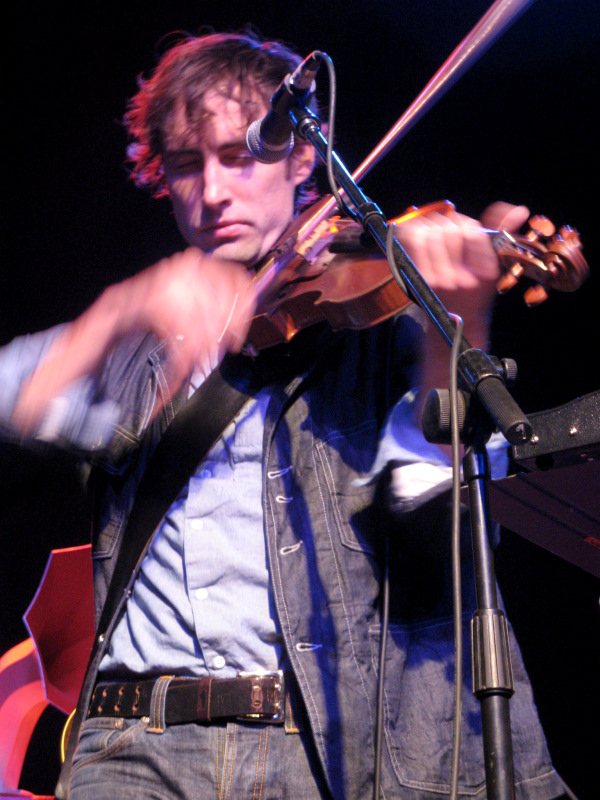 Andrew Bird in performance in 2007 (Photo: elpicador, CC BY 2.0, via Wikimedia Commons)

WFMT: You have performed with the same violin since you were teenager, could tell us about how you got it and little bit about it?

Bird: I was sixteen and it was time for a really serious instrument. I decided to go find a violinmaker, and I heard about this guy, Zenon Petesh, who lived in the Western suburb of Chicago, Norridge. He emigrated from Poland around World War II, and he brought his wood for his instruments with him from a forest in Poland. He didn’t make many violins, maybe 30-40 in his lifetime. He was known for copying the Guarneri “del Gesu” and the Stradivarius with beautiful inlays and carvings. An amazing craftsman, and since he made so few violins, he made me play for him to prove my worthiness of one of his instruments. I can remember being in his workroom and playing him the Bach Partita. He decided I was deserving of the violin, and I have never envied any other instrument. I still play that violin today as my main instrument. It is a very versatile and it has a beautiful tone, but it’s not so specific as your Stradivarius or Italian violins of a certain era. I can really do so much with it and pull so many different sounds out of it.

Bird: When I was in my teens, it was Dvořák and Bach. For the last 20 years or so, it’s been Ravel. To me, he is one of the few composers who mastered rhythmic counterpoint. He can make any size ensemble have real propulsive forward motion, from his string quartet to Boléro.

WFMT: Though you stepped away from the classical world years ago, you have recently played concerts with the Indianapolis Orchestra, Kansas City Symphony, and the National Symphony Orchestra, as well as the LA Philharmonic with Dudamel. What were those experiences like?

Bird: They were all great orchestras and I learned a lot. I realized that the conductor is key. I’ve arranged six of my songs with the help of Gabriel Kahane into a suite. There is a lot of interstitials and some improvisation as well. In these arrangements, there is a lot of stuff out of time so the orchestra has to be cued constantly, and the conductor has to get cues from me for the tempo. We had to experiment with different ways to get the orchestra to not just be a staid version of what I do solo. It really worked. It was a very challenging suite for everybody. And that was my goal with it. Not only were they dramatic underscoring to my songs, but they were real.

WFMT: What is the best way to get new audiences into classical music?

Bird: Don’t dumb it down or showbiz it up. There are other ways to make it cool. If you lose the taste factor then what is the point? Putting a program in a historical context through multimedia is one idea. Improvisation with orchestra interests me. Too much of the pop crossover stuff just dramatizes an artist or a band instead of fully integrating them. Having a soloist dress up in rock and roll attire isn’t going to win over audiences.

WFMT: What is your advice for someone who wants to study music or become a professional musician?

Bird: There is more than one way to have a musical career. There’s no guaranteed, prescribed route. You don’t have to wait for someone to pick you at an audition out of 100’s of hopefuls for that one seat in an orchestra. Arrange your own concert, or create your own venue if you have to. “Sew your own coat.”

Andrew Bird performs at the Chicago Theatre on July 16 at 7:30 pm. This interview has been lightly edited for clarity.