The Lincoln Trio, formed in 2003, has been praised for its polished presentations of well-known chamber works and its ability to forge new paths with contemporary repertoire. The group’s reputation as a first-rate ensemble draws an eclectic audience of sophisticated music lovers, young admirers of contemporary programs, and students discovering chamber music for the first time. Violinist Desirée Ruhstrat, cellist David Cunliffe, and pianist Marta Aznavoorian performed works by Haydn, Beethoven, and Patrick Zimmerli on June 15 at the Ravinia Festival. 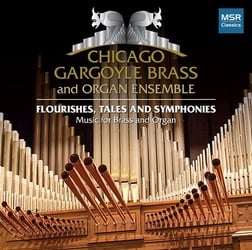 The Chicago Gargoyle Brass Quintet began in 1992 as a chamber group of faculty and students at the University of Chicago, whose campus architecture boasts a charming variety of the ensemble’s namesake. Over several years, the group transformed itself into a specialized brass and organ concert ensemble. On their 2015 album “Flourishes, Tales, and Symphonies,” the group featured a work they commissioned from Carlyle Sharpe.

The Hessler Duo was formed by pianist Youn-Jung Cha and violinist Yun-Ting Lee. The name originated from the street the two lived on as housemates while they were students at the Cleveland Institute of Music. As a duo, they have performed in the Midwest, with concerts at the University of Iowa, St. Ambrose University, and Augustana College.

Violin Sonata No. 1 in G major, Op. 78 by Johannes Brahms

The North Shore Chamber Music Festival was founded in 2010 by concert violinist Vadim Gluzman and pianist Angela Yoffe in a quest to provide Chicago’s North Shore with musical experiences of the same caliber and quality as those found in Metropolitan Chicago and the great halls of the world, but within a very intimate and welcoming environment. On June 14 at Village Presbyterian Church in Northbrook, the Escher Quartet was joined by double bassist Kurt Muroki in a Mozart Divertimento.

Described as “consummate practitioners of pianism” (The Washington Post), Claire Aebersold and Ralph Neiweem enjoy an international career as exponents of music for both piano duet and two keyboards. Their innovative programming reflects the full gamut of this delightful repertoire, from four-hand works of Mozart, Schubert, and Brahms, to contemporary compositions. Aebersold and Neiweem recorded Schubert’s four-hand piano music at WFMT for the Summit label.

Allegro in A minor, D. 947, Lebensstürme by Franz Schubert