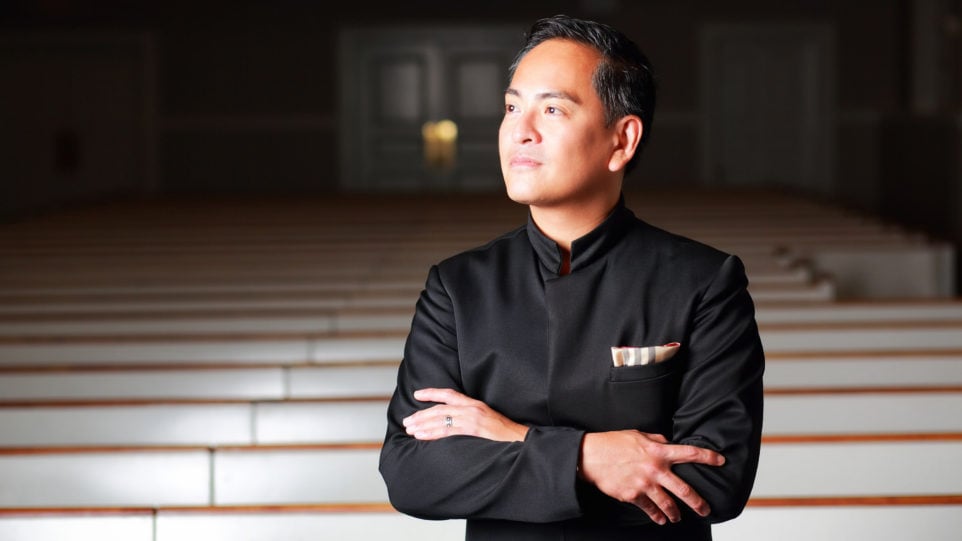 Pianist Victor Santiago Asuncion returns to the Fay and Daniel Levin Performance Studio for a live recital.
Hailed by The Washington Post for his “poised and imaginative playing,” Filipino-American pianist Victor Santiago Asuncion has appeared in concert halls in Brazil, Canada, Ecuador, France, Italy, Germany, Japan, Mexico, the Philippines, Spain, Turkey and the USA, as a recitalist and concerto soloist.  He played his orchestral debut at the age of 18 with the Manila Chamber Orchestra, and his New York recital debut in Carnegie’s Weill Recital Hall in 1999. In addition, he has worked with conductors including Sergio Esmilla, Enrique Batiz, Mei Ann Chen, Zeev Dorman, Arthur Weisberg, Corrick Brown, David Loebel, Leon Fleisher, Michael Stern, Jordan Tang, and Bobby McFerrin.

A chamber music enthusiast, he has performed with artists such as Lynn Harrell, Zuill Bailey, Andres Diaz, James Dunham, Antonio Meneses, Joshua Roman, Cho-Liang Lin, Giora Schmidt, the Dover, Emerson, Serafin, Sao Paulo, and Vega String Quartets. He was on the chamber music faculty of the Aspen Music Festival, and the Garth Newel Summer Music Festival.  He was also the pianist for the Garth Newel Piano Quartet for three seasons. Festival appearances include the Amelia Island, Highland-Cashiers, Music in the Vineyards, and Santa Fe.

His recordings include the complete Sonatas of L. van Beethoven with cellist Tobias Werner, Sonatas by Shostakovich and Rachmaninoff with cellist Joseph Johnson, the Rachmaninoff Sonata with the cellist Evan Drachman, and the Chopin and Grieg Sonatas, also with cellist Evan Drachman. He is featured in the award winning recording “Songs My Father Taught Me” with Lynn Harrell, produced by Louise Frank and WFMT-Chicago.  Mr. Asuncion is the Founder, and Artistic and Board Director of FilAm Music Foundation, a non-profit foundation that is dedicated to promoting Filipino classical musicians through scholarship, and performance.

He received his Doctor of Musical Arts Degree in 2007 from the University of Maryland at College Park under the tutelage of Rita Sloan. Victor Santiago Asuncion is a Steinway artist.