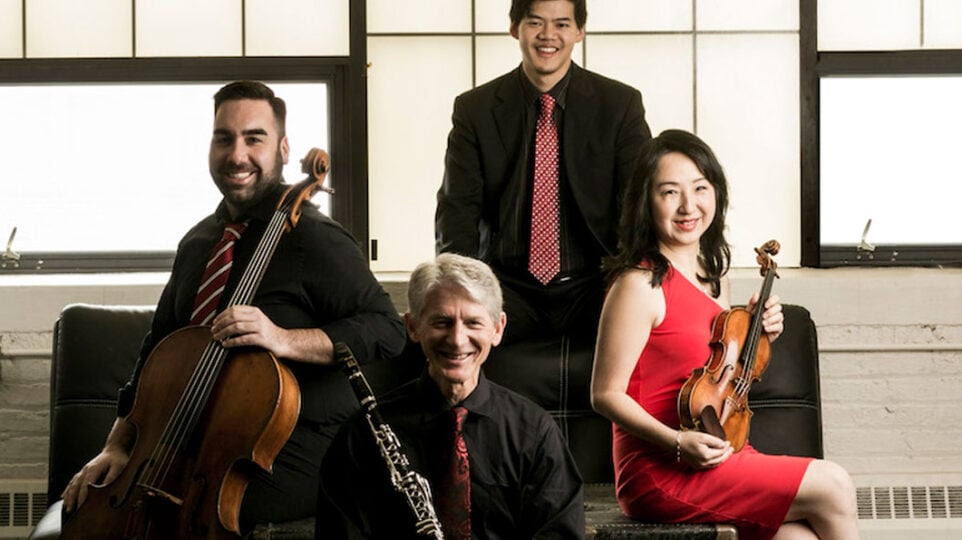 The Civitas Ensemble and the Gipsy Ensemble join together for a diverse program on Live from WFMT.

The Civitas Ensemble presents repertoire spanning four centuries of music history and numerous genres and styles and are champions of living composers from the United States and abroad. Civitas has performed at the Pritzker Pavilion at Millennium Park as part of the City of Chicago’s Loops and Variations series highlighting new music and in 2016, Civitas Ensemble performed in the inaugural Ear Taxi Festival and gave the world premiere of a commissioned piece by David Clay Mettens.

During the Ensemble’s epic international connections project Alla Zingarese, funded by the MacArthur Foundation and Sage Foundation, Civitas premiered a new work by young Czech composer, Lukáš Sommer, along with several other works adapted for the group. Civitas’ 2-disc album, Alla Zingarese, was released under the Cedille Records label in 2018.

Civitas had a fruitful 2018-19 season. The group explored repertoire from the Second Viennese School in the Fall, a powerhouse Russian program on the Chicago Symphony Chamber Music Series in February, and Oliver Messiaen’s “Quartet for the End of Time” as part of Valparaiso University’s liturgical studies in April. In March, Civitas Ensemble was invited to participate in the two-day symposium “The Shanghai Jews: Risk and Resilience in a Refugee Community,” when the former Secretary of the Treasury Michael Blumenthal gave a vivid account of his life in Shanghai during the war, and Civitas Ensemble presented compositions by Jewish and Chinese composers from the wartime. Civitas also participated in the symposium the following day. In the summer, Civitas Ensemble performed on the Rush Hour concert series. And at the end of August, Civitas completed its second CD featuring contemporary Chinese/American composers. The CD release is scheduled for Jan. 24, 2020.

Civitas Ensemble’s performance on WFMT was chosen for the station’s “Best of Live Broadcasts…” distinction and the ensemble continues to receive rave reviews from the Chicago Tribune, Chicago Classical Review, and Chicago on the Aisle. Recognized for both its quality performances and ongoing community engagement efforts, Civitas Ensemble was invited to perform with Yo-Yo Ma at the Chicago Humanities Festival and participate in the panel discussion on the topic of “Artist and Citizenship.” Civitas continues to present a series of free concerts in hospitals, senior living communities and schools each year.

The 2019-20 season marks the 9th year of Civitas Ensemble’s tenure as the Ensemble-in-Residence at Valparaiso University’s Department of Music, where its members perform concerts, coach students in the many aspects of music making, and act as role models for these aspiring young musicians.

Pavel Šporcl. We all have our personal beliefs and are responsible for everything that comes into or out of our lives. I was given the gift of happiness and energy, family background and good people along the path I have chosen.

I am thankful for my place in this world; from here I can contribute to enriching other people’s lives, not just by playing the violin, but also by sharing my positive attitude towards life – which I really enjoy.