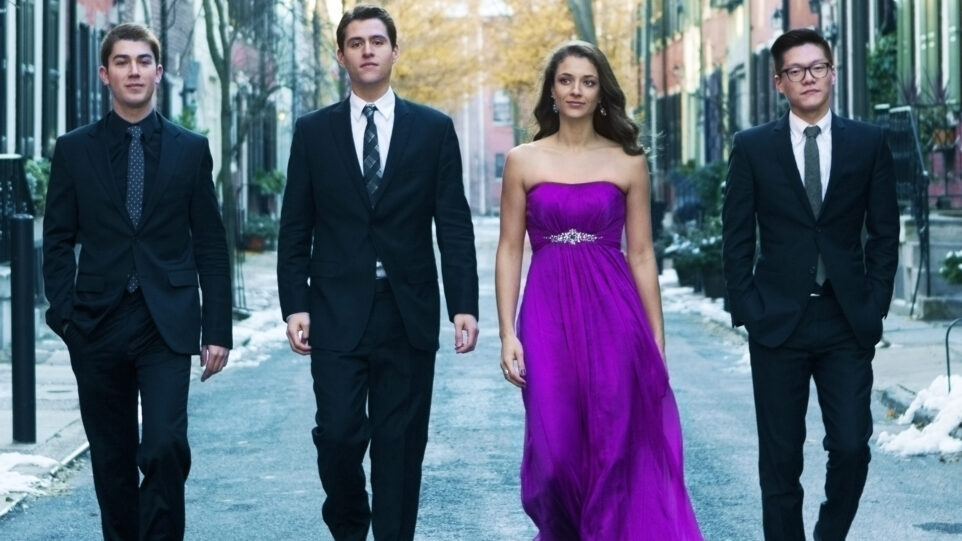 Hailed as “the next Guarneri Quartet” (Chicago Tribune) and “the young American string quartet of the moment,” (New Yorker), the Dover Quartet catapulted to international stardom in 2013, following a stunning sweep of all prizes at the Banff Competition and has since become one of the most in-demand ensembles in the world. In addition to its faculty role as the inaugural Penelope P. Watkins Ensemble in Residence at the Curtis Institute of Music, the Dover Quartet holds residencies with the Kennedy Center, Bienen School of Music at Northwestern University, Artosphere, the Amelia Island Chamber Music Festival, and Peoples’ Symphony Concerts in New York. Among the group’s honors are the Avery Fisher Career Grant, Chamber Music America’s Cleveland Quartet Award, and Lincoln Center’s Hunt Family Award. The Dover Quartet has also won top prizes at the Wigmore Hall International String Quartet Competition and the Fischoff Chamber Music Competition.

In the 2020–21 season, the Dover Quartet debuts with Berkeley’s Cal Performances and New York’s 92nd Street Y, performs in venues in London and Copenhagen, and embarks on its first-ever tour of Latin America, which will be conducted using virtual technology. Upcoming tour performances include collaborations with the Escher Quartet, bass-baritone Davóne Tines, and harpist Bridget Kibbey. The quartet’s first volume of the complete Beethoven string quartet cycle, which focuses on the composer’s Op. 18 quartets, is set to release from Cedille Records in September 2020.

Among its many notable performances in 2019–20, the Dover Quartet made its Zankel Hall debut in collaboration with Emanuel Ax and returned to London’s Wigmore Hall. Other recent collaborators include Inon Barnaton, Ray Chen, Edgar Meyer, Anthony McGill, the late Peter Serkin, and Roomful of Teeth. Equally comfortable with repertoire from a range of eras, the quartet has worked with some of the world’s foremost living composers, including Caroline Shaw and Mason Bates.

Cedille Records released the Dover Quartet’s Voices of Defiance: 1943, 1944, 1945 in October 2017; and an all-Mozart debut recording in the 2016–17 season, featuring the late Michael Tree, violist of the Guarneri Quartet. Voices of Defiance, which explores works written during World War II by Viktor Ullman, Dmitri Shostakovich, and Simon Laks, was lauded upon its release as “undoubtedly one of the most compelling discs released this year,” (Wall Street Journal).

The Dover Quartet draws from the lineage of the distinguished Guarneri, Cleveland, and Vermeer quartets. Its members studied at the Curtis Institute of Music and Rice University’s Shepherd School of Music, where they were mentored extensively by Shmuel Ashkenasi, James Dunham, Norman Fischer, Kenneth Goldsmith, Joseph Silverstein, Arnold Steinhardt, Michael Tree, and Peter Wiley. It was at Curtis that the Dover Quartet formed, and its name pays tribute to Dover Beach by fellow Curtis alumnus Samuel Barber.

The Dover Quartet is the Penelope P. Watkins Ensemble in Residence at Curtis. Their faculty residency integrates teaching and mentorship, a robust international performance career, and a cutting-edge digital presence. With this innovative residency, Curtis reinvigorates its tradition of maintaining a top professional string quartet on its faculty, while providing resources for the ensemble to experiment with new technologies and engage audiences through digital means. Working closely with students in the Nina von Maltzahn String Quartet Program, the resident ensemble will recruit the most promising young string quartets and foster their development in order to nurture a new generation of leading professional chamber ensembles.

The Dover Quartet is dedicated to sharing its music with under-served communities and is actively involved with Music for Food, an initiative enabling musicians to raise resources and awareness in the fight against hunger.

The Dover Quartet plays on the following instruments and proudly endorses Thomastik-Infeld strings.