At the Wilson Ave exit off Lake Shore Drive, pointing towards The People's Music School in Uptown, Chicago.

This Saturday, we feature some of the top students from The People’s Music School, headquartered in Chicago’s Uptown neighborhood. Founded by Dr Rita Simó in 1976, the school began in a small storefront with just a few students, $625, and a donated piano. Nowadays, the school provides tuition-free music education to over 850 students annually. They hail from more than 50 ZIP codes and 90% of them are students of color.

A video and audio team from WFMT, plus pianist Matthew Hagle, visited the school to record four students who are in the Service, Leadership, and Mentorship Program (SLAM), the high school honors program at TPMS. In addition WFMT lent out a remote recording kit to a TPMS family so they could record chamber music at home. The resulting recordings were not only destined for air, but also for a livestream on TPMS’s weekly Music Night, a virtual gathering of the school community. (Watch the livestream here.) 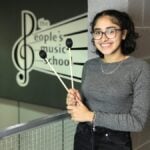 Jaz Rios, a junior at Lincoln Park High School, studies percussion with Michael Kozakis and is involved in a number of programs in addition to The People’s Music School, including Merit School of Music, Ravinia Jazz Scholars, and Chicago Musical Pathways Initiative. She’s done work with Third Coast Percussion and Chicago Youth Symphony Orchestras on steel pan; performs around the city under the Segundo Ruiz Belvis Cultural Center‘s Afro-Caribbean jazz program; and plays in UIC’s Annual Honors Band festival. Jaz enjoys playing a variety of styles from classical to jazz to Latin and more! She spends a lot of time at her church where she is a student leader. She plays on the worship team and serves by helping with the children every week. 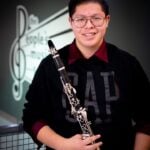 José Vidal is a senior at Lane Tech College Prep. He is a member of SLAM, the high school honors program at The People’s Music School, where he has been a clarinet student for nine years. In 2018 José performed alongside Project& and internationally renowned flutist Claire Chase in a production of Pan at the Garfield Park Conservatory. In the summer of 2019, José attended the Interlochen Center for the Arts on a full scholarship. This past summer he was accepted to the Los Angeles Philharmonic’s National Youth Orchestra Festival. In his spare time, José enjoys swimming and is hoping to study mechanical engineering and design next year. 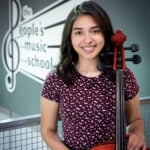 Julia Soto began cello at age 7 as part of TPMS’s Youth Orchestra Program in Albany Park. She is now a sophomore at Lincoln Park High School where she plays in the Advanced Chamber Orchestra. She has been a member of Chicago Youth Symphony Orchestras programs for five years, now performing in the Accelerando Strings. Julia is a member of SLAM at The People’s Music School, where she performs in the Senior String Quartet and mentors younger students every week. Through TPMS Julia had the opportunity to perform for Barack & Michelle Obama, a performance which she was later interviewed about by Billboard Magazine.

In the summer of 2019 Julia participated in the National Youth Orchestra of LA (YOLA) Festival, where she sat as assistant principal in the Chamber Orchestra. She was also invited to participate in the 2019 Chicago Chamber Music Festival at Northeastern Illinois University. Julia Soto is also a fellow with the Chicago Musical Pathways Initiative. Julia is a student of David Sands at The People’s Music School, where she plays on a 1996 Staszel cello generously donated by the Tarko Family.

For this project, Julia recorded both solo repertoire with pianist Matthew Hagle and chamber music with her two brothers: 12-year-old Kevin Soto on cello, and 19-year-old Jason Soto on double bass. 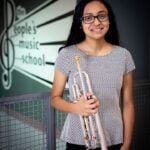 Born and raised in Chicago by immigrant parents, Graciela is a junior at Lane Tech High School and hails from the Belmont Cragin neighborhood. Graciela has immersed herself in biochemistry and trumpet performance studies while also pursuing certificates in performance and mentoring, and leadership. When not in class or practicing trumpet, Graciela teaches younger trumpet students at The People’s Music School, conducts marketing research for TPMS, helping plan and run community-service events, volunteering as a Spanish translator, and participating in the ROTC program at Lane Tech. She was Principal Trumpet at the 2019 YOLA National Orchestra Festival, where she got to perform at Walt Disney Concert Hall with conductor Gustavo Dudamel. She also received an acceptance from the Interlochen Arts Camp with a full scholarship.

At Lane Tech, Graciela is a runner on the cross-country and track teams, participating in both citywide competitions and state championships. She is also a member of the National Modern Music Masters, performing at communal events, including at churches, hospitals, and refugee centers. A member of SLAM, the high school honors program at The People’s Music School, she has been a summer ambassador for three years. After college, Graciela plans to pursue a career in biochemistry and trumpet performance. She currently studies trumpet with Kelly Dennis. 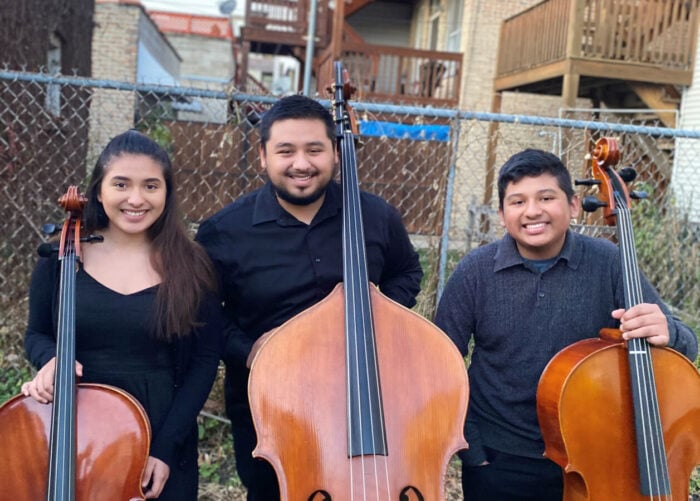 Sonata No. 1 in G for two cellos and continuo, Op. 2 No. 1, by Benedetto Marcello
II. Presto