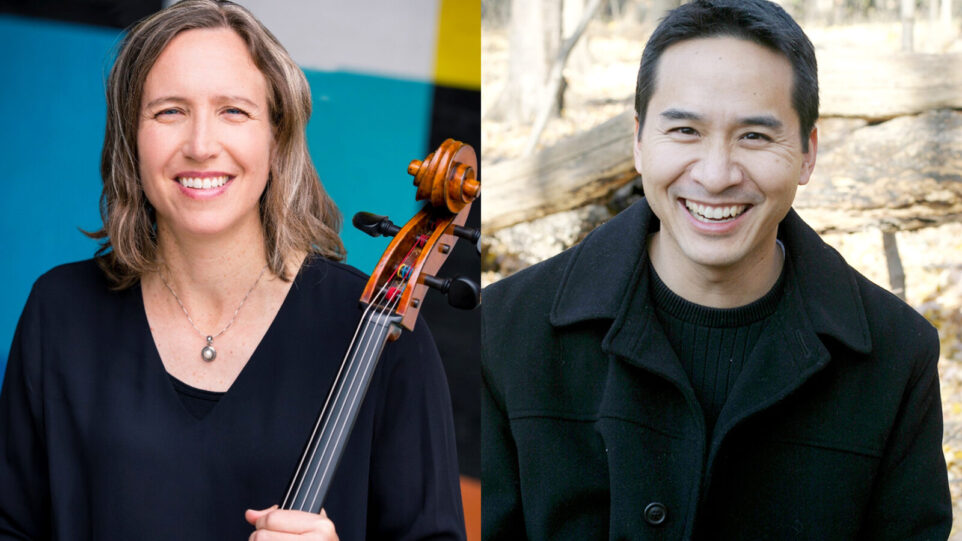 Tune in to WFMT or watch the livestream below to enjoy the performance.

She enjoys contemporary music and has played consistently for the Fulcrum Point New Music Project. For many years she played for the CUBE contemporary ensemble, with performances in many Chicago venues. She has performed premieres of numerous compositions, with concerts at the Ravinia Festival, the University of Chicago, and the University of Illinois­ at Chicago. In addition she has played for recordings including the Brandenburg Project, featuring the music of Larry Axelrod, and for a recent recording and premiere of the composition Music for Five by Marc Mellits.

In addition to recital and chamber music performances Ms. Kosower regularly performs as a cello substitute with the Chicago Symphony Orchestra. For the past three seasons, 2012­-2015, she has served in the cello section for the Lyric Opera of Chicago. She has also played with the Grant Park Symphony and the Milwaukee Symphony Orchestra.

Ms. Kosower is a faculty member at North Park University where she teaches applied undergraduate lessons, cello class ensemble, and performs with the Ensemble Nouvelle Epoque. She is also on the faculty at the University of Illinois at ­Chicago, teaching applied lessons and performing as a member of the faculty Circle Ensemble. She teaches cello pedagogy courses for undergraduate and graduate students at Northwestern University and DePaul University. For the Northwestern University Music Academy she maintains a full studio of pre­college students. She also coaches chamber music for the Chicago Youth Symphony Orchestra program. For the past several years she has served as Vice ­President of the Chicago Cello Society, an organization promoting the art of cello playing with a variety of events in the Chicago area each season.

She earned her B.M. and M.M. degrees at Indiana University where she was a scholarship student of Janos Starker. She also served as Mr. Starker’s graduate teaching assistant. During numerous summers she attended the Aspen Music Festival where she studied with Rafael Figueroa, Eric Kim, David Finckel, Alan Harris, Michael Mermagen, and Zara Nelsova. She also attended the Steans Institute for Young Artists, participating in both the piano and strings chamber music program and the collaborative vocal chamber music program. Her studies at the Steans Institute included lessons with Gary Hoffmann, Timothy Eddy, David Geringas, and Bernard Greenhouse. She has played for masterclasses of Yo­Yo­ Ma, Lynn Harrell, David Soyer, and Zara Nelsova. She completed her D.M. degree at Northwestern University where she studied with Hans Jorgen-Jensen, and during this time also served as principal cello of the Civic Orchestra of Chicago.

Commended for his “perceptive pianism” (Audiophile) and “playing that is sensitive and wonderfully warm” (American Record Guide), Chicagoan Kuang-Hao Huang is a highly sought-after collaborative pianist whose performances have taken him throughout North America, Europe and Asia.

Mr. Huang has performed in New York City’s Weill Hall at Carnegie Hall, Lincoln Center, and Merkin Hall; in Washington, D.C.’s Kennedy Center; and at every major venue in the Chicago area, including the Harris Theatre and Symphony Center. He is often heard live on WFMT and has also performed on WQXR and on Medici.tv. Mr. Huang has recorded for Aucourant, Cedille, Centaur, Innova and Naxos, including a CD of flute fantasies with flutist Mathieu Dufour and a premiere recording of early songs by Alban Berg with mezzo-soprano Julia Bentley. His most recent recordings include Notorious RBG in Song with soprano Patrice Michaels and Songs from Chicago with baritone Thomas Hampson.

A dedicated teacher, Mr. Huang serves on the faculties of the Chicago College of Performing Arts at Roosevelt University and Concordia University-Chicago. He has also taught at the Bienen School of Music at Northwestern University.

Mr. Huang is Associate Artistic Director for the International Music Foundation (IMF) and is the driving force behind Make Music Chicago, a day-long, citywide celebration of music every June 21. He also founded IMF’s Pianos in the Parks program, which partners with the Chicago Park District to give all Chicagoans access to outdoor pianos as well as free lessons.