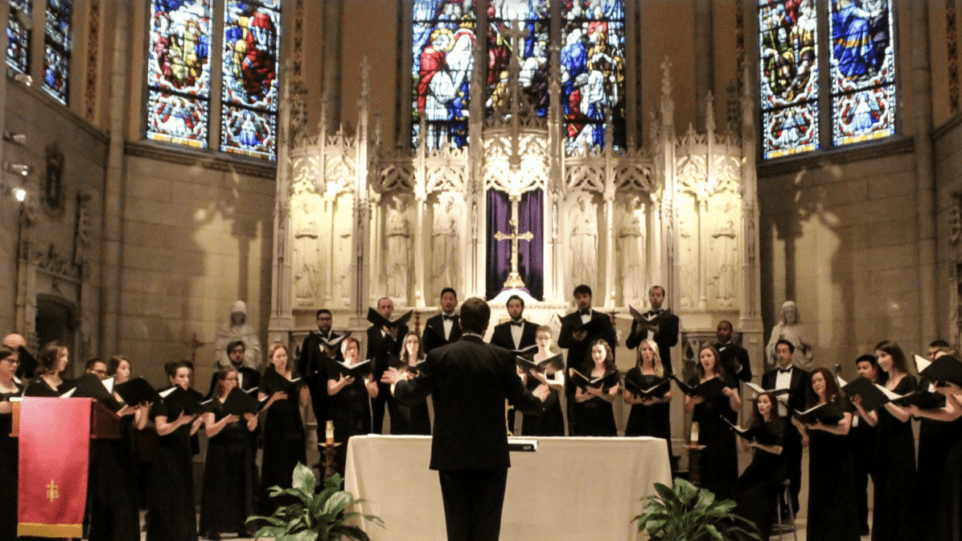 This is a recorded special to celebrate the 25th anniversary of the Chicago Chamber Choir.

The Chicago Chamber Choir’s 40 singers come from a variety of backgrounds. Some are professional musicians, others are teachers, and still others have careers in fields as diverse as law and medicine. They are united through their passion for world-class choral singing.

The choir’s repertoire is diverse and expansive; each program carefully curated, drawing from the immense collection of choral music throughout history and around the world. CCC has a special interest in contemporary choral music and how it speaks to the lives and values of modern singers and audiences.

The Chicago Chamber Choir is committed to extending our community beyond our singing members to other musicians, community partners, and our audience. We seek to use music to affect positive change in the world. Collaboration, with groups large and small, is part of that identity. Collaborating musical ensembles include CHAI Collaborative Ensemble, Youth Choral Theater of Chicago, and the Lakeview Orchestra. Community partnerships include the Chicago Historical Society and Night Ministry.

The Chicago Chamber Choir began as a grassroots effort organized by accomplished music teacher and singer Deborah Skydell in 1996. This new 40-voice ensemble specialized in a cappella performance and sharing music with individuals and communities who have limited access to high-caliber vocal performance. The philosophy that music should be available to everyone continues to be an integral part of the Chicago Chamber Choir’s identity.

In 1998 the conductor’s role was filled by Toria Burrell, a member of the ensemble and gifted musician. Influenced by her British training, Burrell expanded the choir’s repertoire of modern American and Eastern European composers to include a greater diversity of styles. During her tenure, the choir formed a Board of Directors and received its non-profit status. Timm Adams, a baritone, joined the ensemble the following season and replaced Burrell as Artistic Director in January 2000.

After 15 seasons with the choir, Adams retired as Artistic Director, and in 2015, critically-acclaimed conductor Dr. Doreen Rao was appointed Artistic Director for Chicago Chamber Choir’s 20th Anniversary Season. As CCC continued its search for a permanent musical leader, talented Associate Conductor Amy Keipert directed the choir’s 21st season and remained an inspiration to long-time CCC singers during the period of transition.

In 2017, Chicago Chamber Choir selected Christopher Windle as their new Artistic Director. Windle, an accomplished conductor whose impressive experience includes work with the Maryland State Boychoir, Chicago Bar Association Chorus, Constellation Men’s Ensemble, and more, made his debut with CCC in the fall of 2017.

Today, the Chicago Chamber Choir rests on a solid musical foundation and attracts seasoned and experienced singers to its competitive auditions. CCC presents four main concerts each year, collaborates with other Chicago-based arts organizations, performs at private and corporate events year-round, and continues to sing for community partners throughout Chicago and the surrounding suburbs. CCC is a grantee of many Illinois-based foundations, including the Illinois Arts Council, the ArtsWork Fund for Organizational Development, and the Richard H. Driehaus Foundation.