Pianist Matthew Hagle is a musician of great versatility and depth, whose performances are a rare mixture of musical understanding, imaginative programming, pianistic mastery, and beauty of sound. He performed all of Beethoven’s 32 piano sonatas in a series of live recitals over WFMT. Founded in 1982, Bella Voce has received acclaim for performing classic a cappella repertoire, early music of the Americas, and contemporary music from all over the world. On Awake the Dawn, the ensemble presents music by three of today’s most innovative composers: Gabriel Jackson, Frank Ferko, and Eric Whitacre. 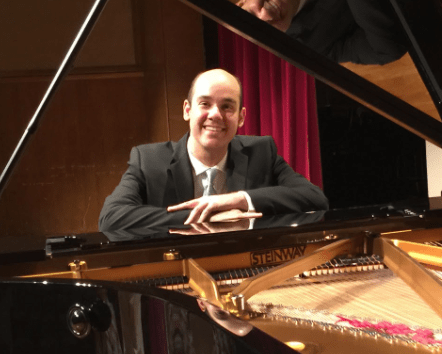 Vicente Della Tonia has performed solo and chamber recitals in concert halls throughout the United States, Spain, and his native Brazil. He has received prize awards in numerous competitions and is a recipient of the Steinway & Sons Top Teacher Award of the Year. Founded in 2004, Gaudete Brass is devoted to presenting chamber music at the highest level of excellence. On “Chicago Moves,” the ensemble performs new and diverse American works for brass quintet. All the works but one were written expressly for the Chicago-based ensemble of young brass virtuosos and receive their world-premiere recordings.

Chanticleer is known around the world for the seamless blend of its twelve male singers ranging from countertenor to bass. In December 2012, Carl Grapentine welcomed this “orchestra of voices” for an Impromptu filled with music of the season.