This week on Introductions, members of the Chicago area’s Ukrainian community perform music of their home country for piano, violin and voice. 18-year-old pianist Myroslav Mykhailenko is joined by young friends and colleagues with selections by five different Ukrainian composers.

Thank you to the Music Institute of Chicago for hosting us at Nichols Concert Hall. 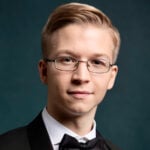 Myroslav Mykhailenko was until recently a Scholarship Fellow at the Music Institute of Chicago Academy, a training center for advanced pre-college musicians.

He was born in Kyiv, Ukraine, and began playing piano at the age of 6. He studied at the Kyiv Lysenko State Music Lyceum, a high school for gifted musicians. When he was 13, he and his family immigrated to the United States of America, settling in Wood Dale, Illinois.

Upon his arrival in the US, he continued his piano studies and won numerous awards from Sejong, Walgreens, and Crain-Maling Young Artists music competitions. He has performed in masterclasses with Marian Hahn, Michael Brown, Shai Wosner, and Logan Skelton.

Myroslav gave a radio recital on Introductions in November 2019, and was featured on WTTW’s Chicago Tonight in May 2022. He has been accepted to the Peabody Conservatory where he will begin study with Benjamin Pasternack in the fall. 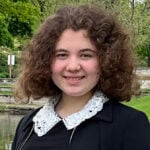 Julia Perekhozhuk started playing the violin at the age of 4½ with teacher Olga Karabinovych, and currently studies at the Music Institute of Chicago on a Merit Scholarship with Sang Mee Lee, where she also plays in the chamber music program. She is also in Chicago Youth Symphony Orchestras, currently a member of the CYSO Philharmonic Orchestra and previously concertmaster of the Debut and Concert Orchestras.

Julia lives in Westchester, Illinois and is in 8th grade at The Avery Coonley School in Downers Grove. In her free time, Julia enjoys spending time with her older siblings; and likes drawing, singing and baking. 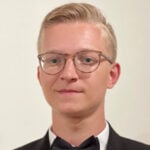 Born and raised in Kyiv, Ukraine, Nazarii Mykhailenko has been involved in music since the age of nine. He successfully joined the Kyiv Lysenko State Music Lyceum, where he studied a range of disciplines including music theory, piano, choral conducting and classical voice.

Immigrating to the United States in 2017, Nazarii quickly became highly involved in his high school’s music program. He won a place in the ILMEA All-State Choir in 2018 and participated in Chicago Master Singers Choir outside of school. He lives in Wood Dale, Illinois and is currently studying at Roosevelt University, pursuing a double major in Music Education and Classical Voice Performance with Mark Crayton. 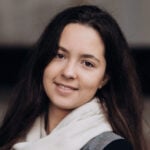 On February 24, 2022, Anna had to leave her country because the Russian army attacked her city. For two months she stayed with family friends in Frankfurt, Germany, and in May 2022, Anna moved to the United States. She is continuing her piano studies and lives in Highland Park, Illinois.