Throughout the course of history, many Indigenous tribes have settled in, migrated to, and been forced out of the land we refer to today as Illinois. The very name Illinois comes from the confederation of native tribes who lived here — the Illini or Illiwek — composed of at least twelve tribes. The major tribes in Illinois that the U.S government recognized by treaty were the Council of the Three Fires: Chippewa, Odawa, and Potawotami. State-sanctioned violence, discriminatory laws, environmental factors, and more sent tribes to and from the region, causing Indigenous cultures and customs to mix. Curious about the Indigenous music of Illinois, WFMT compiled a list of some common instruments and customs from the region’s rich heritage.

Unfortunately, many aspects of Indigenous culture across the United States are difficult to trace due to centuries of widespread and systematic persecution. The passing of the Religious Crimes Code in 1883 outlawed all Native dancing and ceremonies, a ban that would remain in place until the 1970s. American Indian “boarding schools” kidnapped children from their homes and forced assimilation to Western culture. All of this, alongside continued land theft and more, prevented multiple generations of Native people from actively participating in their culture, resulting in the loss of information that normally would have been passed down intergenerationally. 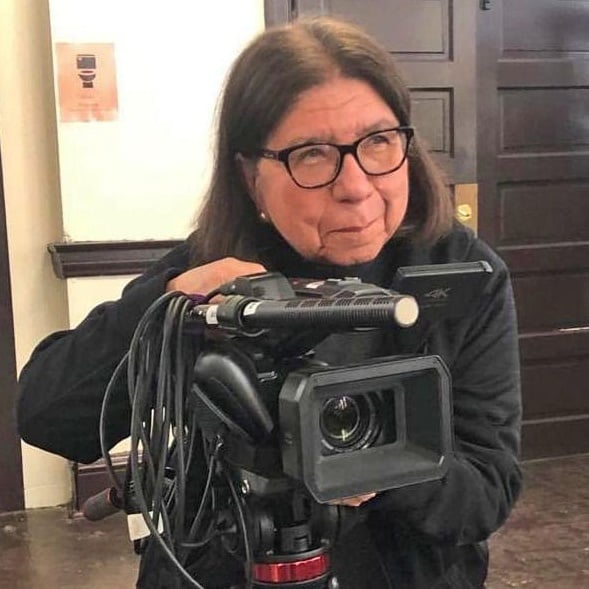 Luckily, the rise of intertribal powwows in the 1960s and ‘70s helped spark a national revival of Indigenous music, and there are folks today working to reconstruct pieces of lost Indigenous history. In addition to extensive research, WFMT consulted with two experts for this article: William Buchholtz-Allison and Dr. Dorene Wiese.

Dr. Dorene Wiese is an American Indian singer who traveled for 13 years with a drum group called Myn-da Jay-da, and is the current President of NAES College. She is currently CEO of the American Indian Association of Illinois. William Buchholtz-Allison is an accomplished Algonquin First Nations flutist who has performed all around the world, presenting traditional as well as contemporary music and his own compositions.

This article is meant to be a beginner’s guide into the world of indigenous music of local tribes. For specific information about the history of Indigenous peoples of Illinois, please visit the tribes’ respective websites and the website of the Association on American Indian Affairs. Additional resources can also be found at the end of this article.

The major instrument groups of Indigenous tribes across the Illinois/Western Great Lakes region can be divided into three categories: flute, drum, and shaker. Like most American Indigenous tribes, music plays a major role in the cultures of tribes of this region, with traditions & songs being passed down from family member to family member.

The most common instruments used in tribes of the Illinois/Western Great Lakes region are as follows.

A Winnebago [Nebraska] gourd rattle made of Gourd, wood, and glass beads, via National Museum of the American Indian

Gourd rattles are among the oldest recorded instruments in North America. Different tribes favor different gourds to use as rattles: from dipper gourds, to the bell gourds used in gourd dances. Despite this, Dr. Wiese mentions, the preparation of the rattles is often similar across nations. A gourd is dried out, a wooden handle is carved, and the instrument is filled with small pebbles, seeds, or balls made of glass or plastic. Gourd rattles are one of the most versatile instruments in Indigenous music, used in a variety of ceremonies and social events.

Rattles can also be made of animal hide or even repurposed objects like cans.

Drums play an important role in many American Indigenous ceremonies, though drum types themselves vary. Drums can be used in war times, in weddings, to underscore announcements, and more. Drumheads are often made from animal hide, with a wood structure that holds the skin taut and in place. Contemporary drums might incorporate synthetic materials like plastics or fake hide.

Some drums common to the Illinois/Western Great Lakes region include…

Also known as a powwow drum, the Native American Big Drum did not originate in the Illinois region. It finds itself on our list due to its importance in powwow tradition, which was begun by the Omaha people, and popularized nationwide as a way of bringing folks from different tribal backgrounds together. The drum also originated with the Omaha people and other regional tribes of modern-day Nebraska. Due to its large size, says Buchholtz-Allison, the Big Drum has been nicknamed the “Heartbeat of Mother Earth.” 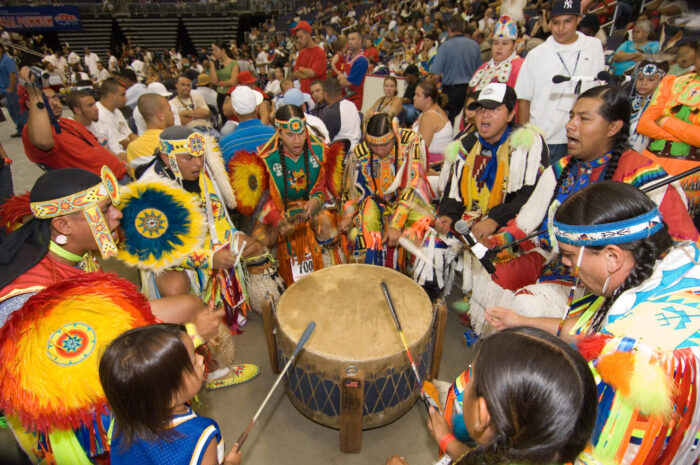 A Big Drum at a Powwow (Photo: Smithsonian Institution, No restrictions, via Wikimedia Commons)

Big drums are at the center of many Indigenous drumming activities. In order to accommodate multiple drummers at once, they are made out of sturdier rawhide and wood than other types of drums and can extend up to two or three feet in diameter. Players simultaneously strike the drum with drum sticks while singing, providing a beat and a melody which tribal members use to dance. In this context, big drums serve a communal purpose, bringing people together in joyous celebration. Big drums can also serve a more solemn ceremonial purpose as well; spiritual ceremonies requiring the big drum have their own etiquette and rules regarding music that often cannot be shared with outsiders.

Water drums are most often used in spiritual practices. They are widespread in North America, but they can be traced to Iroquois, Navajo, Cherokee, Creek, and Apache people.

Water is poured into a metal or clay container, sometimes repurposed pottery, before it is covered with tanned hide and tied together with rope and special stones. The amount of water poured into the base dictates the tone and timbre of the drum itself. 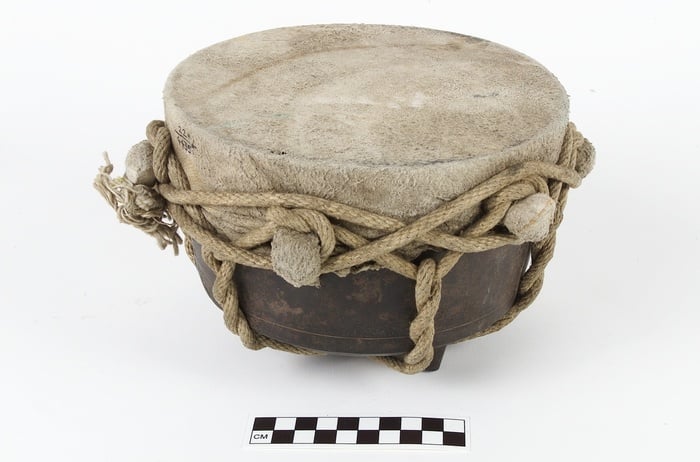 A Sioux water drum made of iron, hide, and cordage, via National Museum of the American Indian

Compared to other Indigenous instruments, the water drum was particularly singled out by discriminatory rhetoric due to its connection to peyote rituals. Dr. Wiese noted that water drums, peyote, and other aspects of spiritual Indigenous practices weren’t protected by law until 1993, when the US Congress enacted the Religious Freedom Restoration Act. This law closed loopholes that permitted various states to discriminate against Indigenous people for practicing their traditions.

Today, the water drum plays a vital role during ceremonies in the Native American Church, a religion practiced by many tribes across the United States.

Widespread across North America, hand drums are smaller drums that individual tribal members often craft for themselves. They are held in one hand and hit with a mallet with the other. Hand drums are the most frequently used instrument in Indigenous tribes across the Illinois and Great Lakes region due to their versatility: most members in a tribe have made their own hand drum, though there are craftsmen who make the drums for others as well. 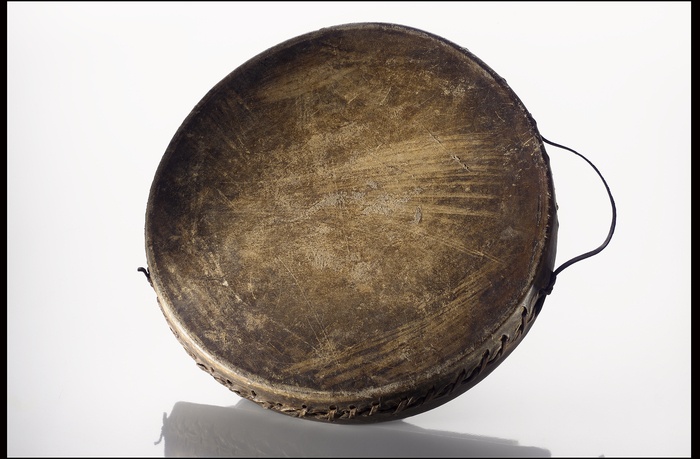 A Minnesota Chippewa hand drum made of hide and wood, via National Museum of the American Indian

Historically, hand drums were used in a wide variety of settings: spiritual ceremonies, wartime ceremonies, social events, and more. In contemporary contexts, the hand drum is an especially popular instrument used for Powwow singing contests.These contests are part of the 49 Songs tradition which is popular in the Midwest and throughout the country. Legend has it that the 49 Songs were traditionally written to commemorate a group of 50 warriors who went to battle, Dr. Wiese told WFMT, though it is contested whether 49 refers to the number that came home, or the number of warriors that were killed. An example of some of these war songs can be found on the album War Expedition Songs by Kiowa 49. Despite their origins, nowadays, the 49 Songs are often performed in entertainment and social settings, including at Powwows and also at Round Dance events. Songs often start with a solo singer, but can open up to the rest of the circle similar to a jam session.

Flutes are considered one of the most sacred instruments among Indigenous tribes of North America. Their looks vary between tribes, yet they often share core characteristics. Native American flutes traditionally contain 5 or 6 holes and are made out of a geographical area’s most suitable wood. For example, Buchholtz-Allison explains, flutes from around the Great Lakes region are most often 5-holed and can be made out of woods like cedar or maple.

“The addition of a 6th hole is a more modern twist,” he explains, “to widen the range of the instrument you’re playing on.”

Native American flutes do not contain reeds, and are used in a manner similar to the modern-day clarinet, with the performer blowing into a mouthpiece that has an air chamber.

The Native American flute is seen as a solo instrument; in traditional settings, a performer will play alone rather than with a group. Unlike instruments like hand drums or rattles, there isn’t always a flute player in every tribe. Depending on the region, some tribes might not have any traditional flute music at all.

Usage: The bĭbĭ’gwûn flute belongs to the largest family of Native American flutes, known as Native American courting flutes. These flutes have a distinctive “warbling” sound, similar to a vibrato, that occurs naturally due to the flute’s construction. Courting flutes typically have a range of 1 to 1-1/3 octaves and are made of wood. 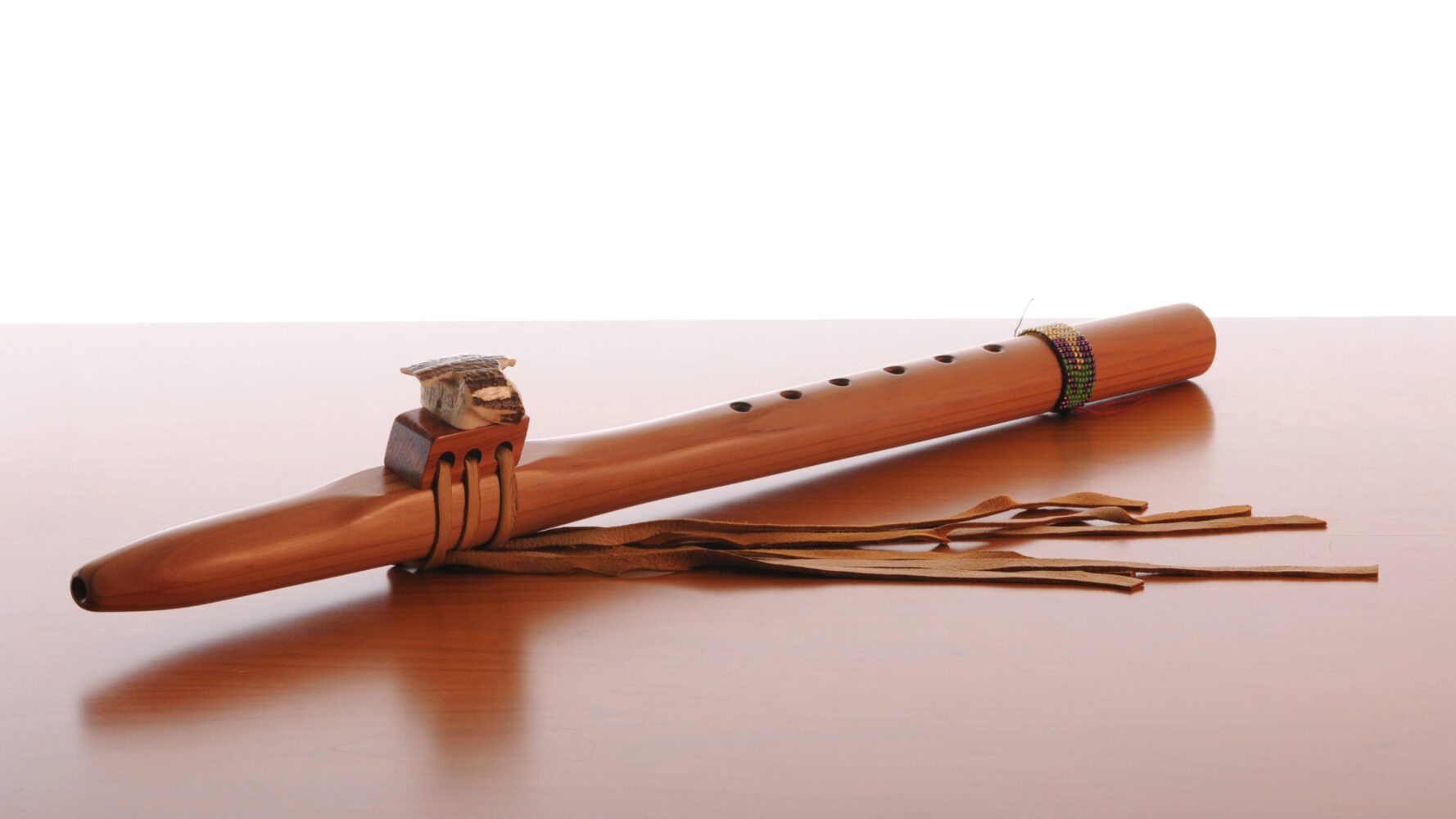 Despite their name, Buchholtz-Allison explains, courting flutes can serve a variety of purposes. Certainly, in some tribes such as Sioux or Cherokee, courting flutes often have been used by young men to serenade their sweethearts. However in Chippewa tribes, these flutes are also used in times of mourning. Tribes might use courting flutes as a means of transmitting signals to one another during nighttime, or in modern times, simply for entertainment. Buchholtz-Allison notes that out of all of the traditional Indigenous songs, music for flute includes the most elements of improvisation – though that goes more for contemporary performance practices than for traditional ones.

From flutes to rattles, powwows to round dance events, the musical customs of many tribes indigenous to Illinois make up a fascinating history. It is part of a heritage that is alive and thriving despite repeated attempts at suppression.

And with new music being recorded and a rise of interest through social media, Dr. Wiese observes “…it’s almost as if we are in the middle of an indigenous art renaissance.”

In order to maintain momentum and keep preservation efforts going, it is important to engage with and directly support Indigenous artists on a local level.

We’d like to extend our warm thanks to Dr. Dorene Wiese and William Buchholtz-Allison for their contributions to this article, as well as staff at the Midwest SOARRING Foundation and Rose Miron of the Newberry's McNickle Center for American Indian and Indigenous Studies for their assistance. They are among the many folks working to preserve Indigenous culture and keep Native traditions alive.

We encourage all WFMT listeners to discover native artists, learn about their culture, and support the revival of the rich, highly nuanced cultures of these native Americans.