Alban Berg’s opera Wozzeck revolutionized the art form when it premiered in 1925. When Berg saw Georg Büchner’s play Woyzeck, he knew that he wanted to compose an opera based upon it. But an opera based upon this revolutionary expressionist play “demanded a new kind of operatic language as well,” according to The Metropolitan Opera Guide to Recorded Opera.

Sir Andrew Davis, music director and principal conductor of Lyric Opera of Chicago, is something of a Berg expert. “I had conducted everything by Berg that needs a conductor up until the premiere of Wozzeck here,” Sir Andrew Davis said. “Though I have performed fragments from the opera about ten times, and Lulu I’ve done three times.”

Explore Wozzeck, the work that changed opera forever, with Sir Andrew Davis himself.

It’s more structured than it sounds

“One of the interesting things about Wozzeck is that it is so formal. Each act is, as it were, united as being part of something larger. The first act is a series of character pieces. The second act is a kind of symphony (with a sonata movement, a scherzo, and so on). And the last act is a series of inventions on certain things.

“Berg talked about some of the technical aspects of the composition in various talks about the opera. He basically said, ‘You don’t need to know any of that,’ which is stating the obvious I suppose. But that way of composing does give the whole piece a sense of continuity and each act a sense of completeness within itself.”

It proves a single note can make a big impact “One scene in the last act is based upon one note, B natural. I think it’s very clear to the audience that one note goes all the way through this scene. It makes things feel very claustrophobic.”

It proves that two instrumental ensembles are better than one

“In the second act Berg used a chamber orchestra which is the exact same instrumental group that Schoenberg used in his Chamber Symphony No. 1,” Sir Andrew said. “Of course, Schoenberg was Berg’s teacher and Berg idolized him. He was constantly dedicating things to Schoenberg.

“The chamber orchestra accompanies certain aspects of the scene, and the rest of the orchestra chips in with different music. And then there’s a big confrontation scene between Wozzeck and Marie, and he always has the chamber orchestra with him and she always has the other instrument with her. For the most part, he is ranting. She is much more relaxed – she’s trying to cool him down. So you have these two separate forces in the pit representing the two temperaments and moods of the two characters on stage. In the audience, you might not be aware of this, but it tells nonetheless.”

“Orchestrally speaking it’s extremely virtuosic. It’s sort of fragmentary at times. One or more sections of the orchestra might be doing one thing, like the wind and brass might be adding sort of strange sporadic interjections, while another section might be doing something different – the strings might be more continuous. Or it could be the other way around.”

The “devil in music” rears its fiendish head 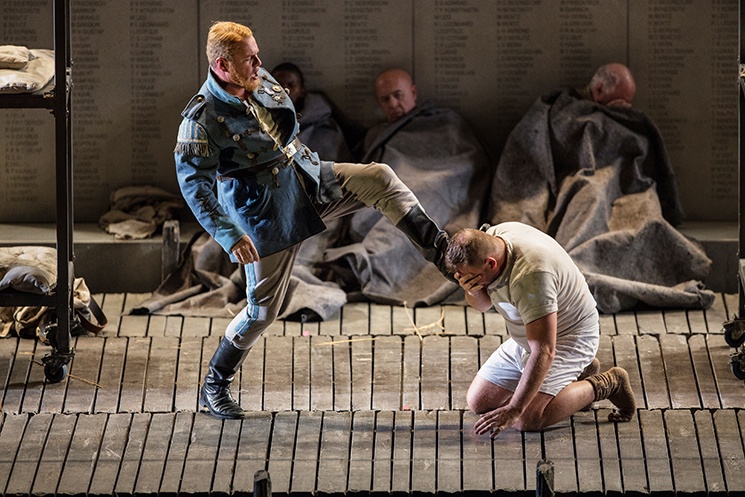 “The relationship between Wozzeck and Marie is shown musically through the interval B-F, but I don’t think people can hear this as easily as some of the other features in the opera, like the persistence of the B natural in another scene. But it’s interesting because the tritone [another name for a diminished fourth] plays a very important role in Lulu and the Violin Concerto. It’s significant because of Berg’s fascination with Hannah Fuchs. H of course is the German way of describing B natural. So H to F is a tritone,” he laughed.

“The thing about Berg is that he was a bit like Schumann, they both liked these sorts of hidden musical messages. Berg went farther than anyone else, I think, in the history of music in leaving these little clues behind. But none of that in Wozzeck or Lulu or the concerto is something that anyone has to think about – they’re sort of private things.”

“There aren’t many fugues in opera, one exception, of course, being the finale of Falstaff,” he said before singing and conducting, “Tutto nel mondo è burla!”

“In one scene with three characters – the Doctor, the Captain, and Wozzeck – each pursues his own train of thought, but they’re intertwining. They each live in their own world. So they’re not exactly having a conversation with each other; it’s very weird. The Doctor and the Captain start out being ridiculously polite to each other, and then they gang up on Wozzeck. Berg always said he wished there could be a film of Wozzeck, and particularly of that scene. In the fugue, he wanted to be able to follow the different voices and have closeups of the different characters. It’s a very free fugue, I have to say.”

It really puts “tonal” in “atonal” 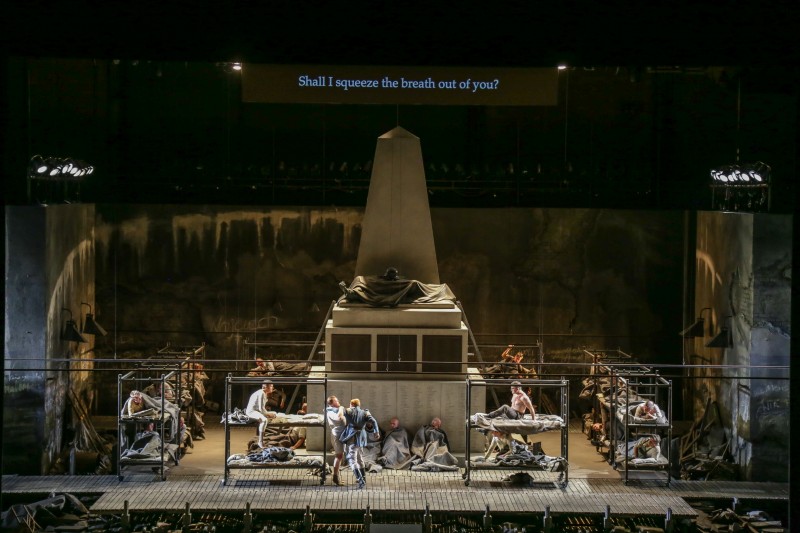 “I sort of hate the term atonality. In Berg, there’s some pretty spiky music. But it’s amazing that many of the chords he writes are very consonant, actually. Berg, even at his most strict in adhering to Schoenberg’s twelve-note system – and he was very strict, actually – but even in the most intellectually rigorous adherence to the principles of the system, there are still tonal components in his music. It’s very clever. Schoenberg’s whole point to the system was to get away from tonality – that there would be no dominant note or feeling of keys or chords that we know and love. But in Berg, they show up all the time.”

“In Marie’s first scene, when she sings a lullaby, some of the chords aren’t your average chords. But, the overall effect to me is certainly very tonal and voluptuous,” he said before singing a few bars. “It’s gorgeous – there’s some very sexy chords underneath. There’s a lot of sensuality in the score when you want it, and tenderness. But the bulk of the piece is about Wozzeck’s persecutors, or whatever you want to call them, so that’s pretty spiky music.”

It will make you question your own sanity 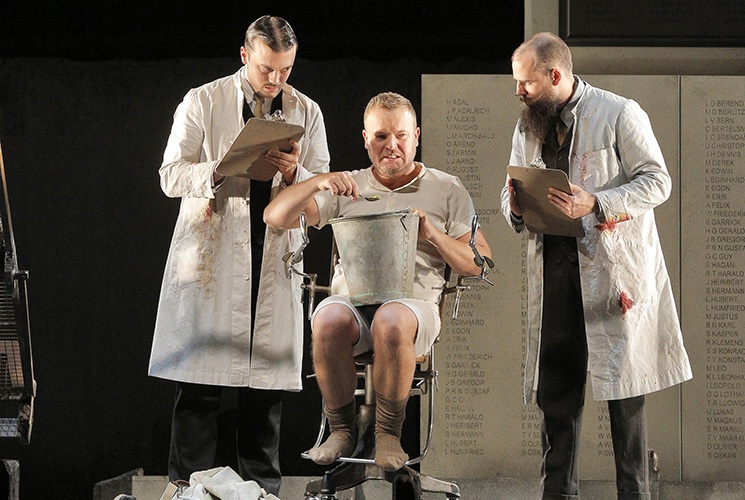 “Most of Wozzeck is about this strange demented man and his fantasies and his final explosion. It’s a very relevant subject to a lot of people these days. We live in a society where we’re all under tremendous pressure, and Wozzeck is Mr. Everyman, in a way. It’s easy to identify with him, I think.

“In the second scene of the opera, Wozzeck’s madness already starts to progress. He’s seeing and hearing things and imagining things under the earth. Of course, the other characters like the Doctor and the Captain can hardly be described as normal, sane people.

“Berg depicts madness in different ways. Wozzeck has quite a few outbursts – I won’t say they’re lyrical – but they have their own logic. He sees things and he thinks them through in a certain logical way, but still disconnected from the real world. In the second scene, he is talking about these hollows in the ground, and he wonders what is inside of them. So he stamps on the ground and there are these crazy trombone glissandi that accompany him.

“If Wozzeck lived in different circumstances, he might be as sane as you or me.”

In the Age of the Visual Album, What Can Opera Learn from Beyoncé?
Decade in Review: The 2010s and Classical Music
Lyric Names Next Music Director: Enrique Mazzola To Succeed Sir Andrew Davis
Lyric Announces 2021-22 Season With 'Magic Flute,' 'Macbeth,' Mazzola
Waltzes in a Pandemic: How Vienna Phil Will Continue Its New Year’s Tradition
James Levine, who ruled over Met Opera, dead at age 77