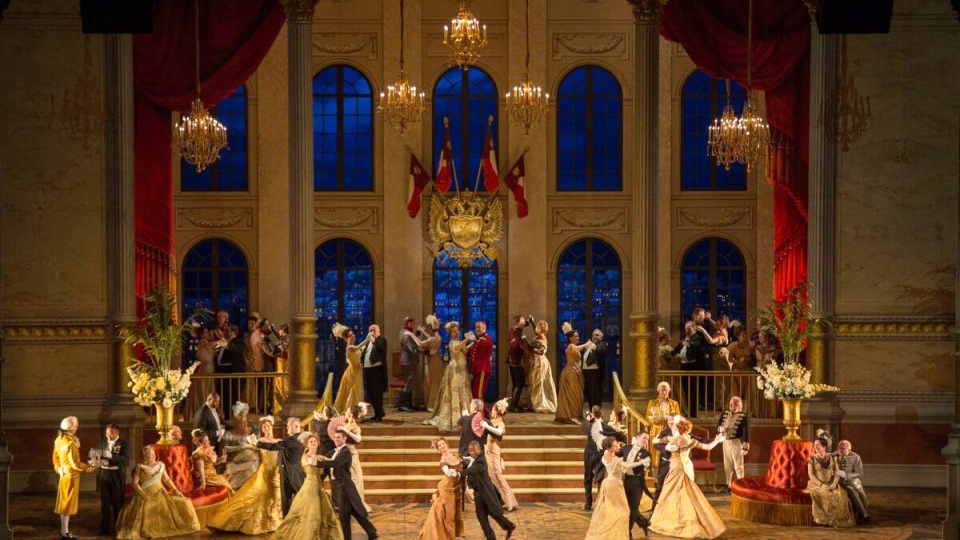 This weekend, The Merry Widow waltzes onto the stage of the Civic Opera House. The production has a star-studded cast that includes soprano Renée Fleming and baritone Thomas Hampson.

But one of the most exciting aspects of The Merry Widow is the opportunity to marry grand singing with grand spectacle, particularly through dance.

Choreographer and director Susan Stroman’s production of the Franz Lehár-composed opera comes to Lyric Opera of Chicago from the Met, where it premiered during the 2014-15 season.

Though dance has been an important part of opera production since the genre was born in the late 16th century, dance is not incorporated into modern opera productions as often, perhaps, as it could be or should be.

In 2013, the Metropolitan Opera disbanded its ballet corps as a “cost-saving measure,” according to Peter Gelb. Now, the company hires dancers on a per-production basis.

Not surprisingly, there aren’t many artists who possess the diverse skills to serve both a stage director and a choreographer for an opera production.

Stroman said, “The director-choreographer is a rare bird in the opera world. Scheduling is the hardest, sometimes I find my name scheduled at the same time in two different rooms!”

Jerome Robbins is one of the director/choreographers she admires most. She commented that “he created some of theater’s most beloved shows: West Side Story, On the Town, Fiddler on the Roof, Gypsy, etc. His characters became iconic because of their motivated movement.

“Having a movement language is very helpful to actors and singers. Most characters are strengthened by understanding how they move. When I am creating blocking and choreography, I have to become these characters.”

Soprano Heidi Stober said that the character she portrays in The Merry Widow, Valencienne, uses dance “as a form of flirtation.”

“There’s quite an age difference between her and her husband, Zeta,” Stober said. “They have a good relationship – it’s not hostile or unfriendly, but there’s probably nothing going on in the bedroom. So, Camille, this Frenchman, comes into the picture, and Valencienne is feeling things that maybe she’s never felt before.”

She explained, “There’s a kind of cat and mouse game with her and Camille. First, she lures him in, then the tables turn, and he says, using physical action, ‘I’m gonna let you get away from me!’ There’s sort of a Fred and Ginger thing going on.”

In the final act, “Valencienne decides to go wild one night. She talks about it being her last night with Camille before he supposedly is going to marry another woman, Hannah. She totally lets loose and becomes a painted lady for just one night, and decides to throw herself fully into a world that she’s never been a part of and never even seen before. That scene is a lot of fun!”

Valencienne joins a group of dancing girls, the Grisettes, called so because of the grey (“gris” in French) dresses they often wore. In this scene, Stober and the Grisettes are required to execute both high kicks and high notes.

“The dance itself is very aerobic and energetic, like running on a treadmill. I always have to remind myself to calm and slow down my breathing so I have enough breath and abdominal support to sing properly.”

Ariane Dolan, who portrays Grisette Lolo, added, “The choreography is tricky in places, and requires core control, so making sure you have enough breath to sing well, and still hold your core to be able to jump, split, or balance on one leg is a challenge.”

While singing and dancing is one challenge, doing it in costume is quite another. To ensure that the dancers can learn the choreography, elements of their costumes are incorporated into rehearsals throughout the production process.

“We always rehearse in long rehearsal skirts, which is very helpful. It is part of the choreography to pick up, grab, and shake the skirt, so you definitely need to practice with an actual skirt,” Mixon said. “We also rehearse in the same can-can boots that we wear in the show, which gives us the chance to break them in so they are comfortable on stage.”

The Grisettes in The Merry Widow at Lyric Opera of Chicago (Photo: Todd Rosenberg)

“Despite all of our efforts to replicate the costume in rehearsal, nothing compares to wearing the actual costume on stage,” Mixon confessed.

Dolan exclaimed, “Dress rehearsal was a whole new world! Not only were the skirts a different texture, but add gloves, a corset, and a hat, it was like a new number. Also, the corset meant figuring out the breath control thing all over again as well.

“All that said, the first dress rehearsal is the best! Working out all the little things that a costume demands is one of my favorite parts of the process. By opening, it will all be under control.”

Stroman said that “The sets, costumes, and rhythms of the dialogue are all inspired by the dance in The Merry Widow. I set the vision of the show, but it’s in great collaboration with my designers – and I have amazing designers for The Merry Widow. Set designer Julian Crouch and costumer designer William Ivey Long have outdone themselves. They helped capture the true essence of the show – romance.”

Mixon added, “William Ivey Long’s costumes are simply stunning and a lot of fun to dance in! As soon as I step into my costume, I’m immediately transported into the time period and atmosphere of Maxim’s, which makes it easier for me to embody the role of Dodo.”

Stober, whose repertoire ranges from Handel to Humperdinck, Rameau to Rossini, said that dancing in The Merry Widow helps inform her work in more traditional opera productions as well.

“Any of the dance that I do in The Merry Widow definitely informs me, as an actor and a singer, about my body,” she said. “It really helps me progress with other roles, whether I am portraying women or young boys, like Oscar in Verdi’s The Masked Ball. I just keep honing my acting skills.

“In this show, there are lots of throws, and flips, and lifts. I cartwheel into one guy’s legs. When I did Show Boat in San Francisco, I had to do some lifts and flips, but nothing like this!”

Though there is an incredible amount of movement in the production, Stober said that “the challenges with works like The Merry Widow or Show Boat are not with the dancing, but with the dialogue. There’s a different kind of dialogue than when I do Pamina in The Magic Flute.

“There’s much more dialogue, and there’s certain acting skills that have to be used and that you have to work on to do this kind of show. Your acting beats are much more music-driven in more the ‘traditional’ repertoire that I do.”

Though dance inflects many aspects of this production of The Merry Widow, Stroman insists, “in the end, the singing is the most important. I have to make sure each singer is comfortable when and where they are singing and that each lyric is motivated by an acting choice.”

To learn more about Lyric Opera of Chicago’s The Merry Widow, visit the company’s website.