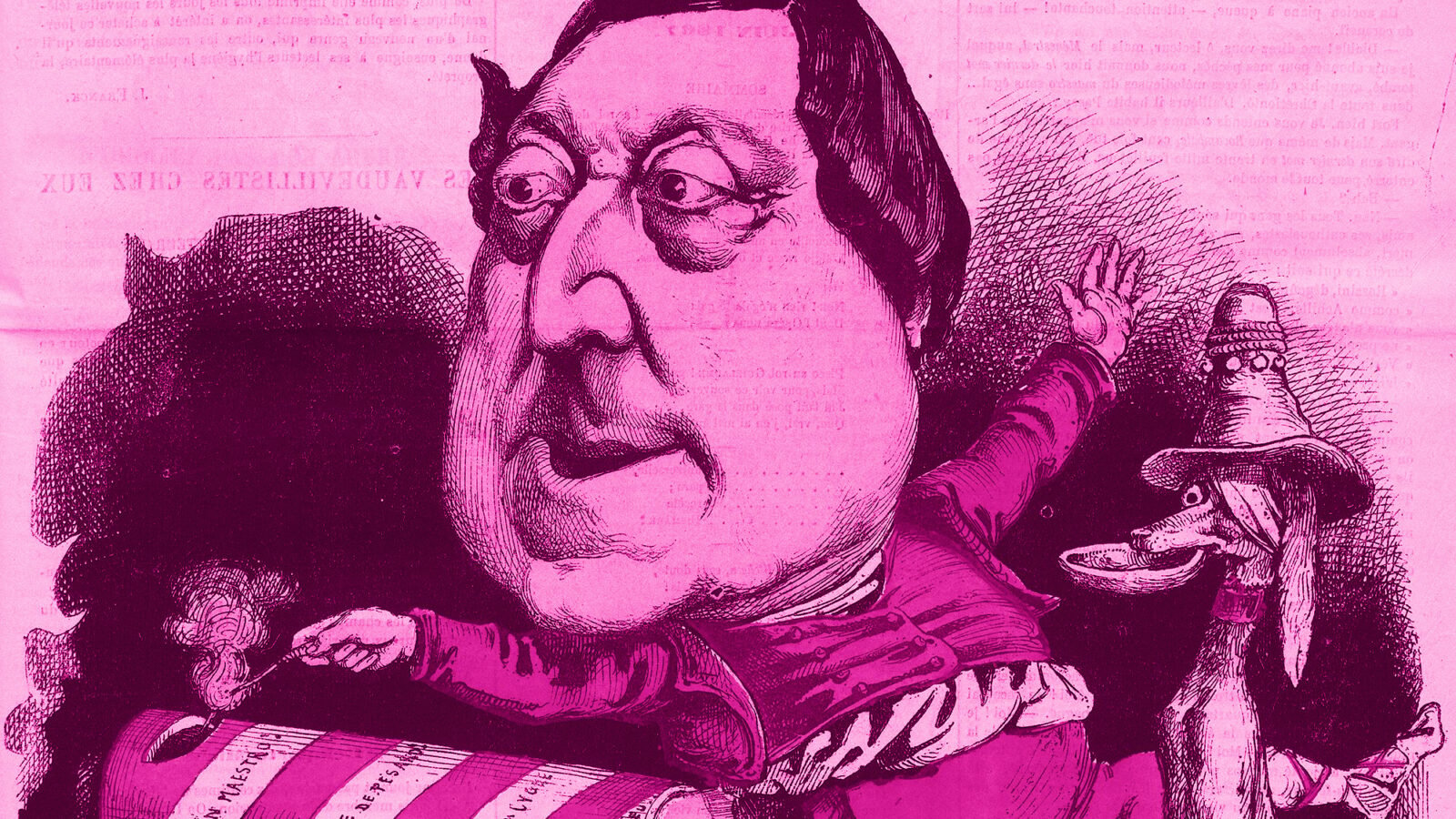 Gioachino Rossini is one of the most successful opera composers in history. He made so much money from the 39 original operas he created between 1810 and 1829 that he retired in his late 30s. Here are a few Rossini operas worth exploring besides his most well known work, The Barber of Seville.

Rossini made his professional debut at age 18 with La cambiale di matrimonio, or The Marriage Contract. At the Teatro San Moisè in Venice, the young composer was on a budget, working only with six soloists and no chorus. Still, he delivered a farsa full of folly and fantastic music, some of which was so good that Rossini recycled some of it later. Some of the musical ideas from the aria “Vorrei spiegarvi il giubilo” in La cambiale were reworked for a duet in The Barber of Seville, "Dunque io son...tu non m'inganni?"

Tancredi was Rossini’s first opera seria, and was innovative in its formal design. He organized the opera in larger units, with dramatic action unfolding even within fixed musical numbers. One of the most popular pieces in Tancredi and all of Rossini’s operas was the aria "Di tanti palpiti" for the title character. It was so enduring throughout the 19th century that Wagner parodied it in his opera Die Meistersinger von Nürnberg.

Rossini’s Il turco in Italia is inventive in its use of metatheater: the central character is a poet searching for ideas for the libretto to his next opera buffa. He finds the perfect story right before his eyes when some Italians and Turks become romantically entangled in a seaside town. When we first meet Fiorilla, who is married to Don Geronio, she sings about how free she is saying “There’s no greater folly than having only one love.” Right after declaring this, she becomes immediately infatuated with a handsome Turk, Selim.

Queen Elizabeth I of England appears in 4 bel canto operas: 1 by Rossini and 3 by Donizetti. (Rossini’s came first.) The Queen makes a royal entrance in Elisabetta with the aria "Quant'é grato all'alma mia.” Rossini borrowed some of the vocal fireworks in this piece from other arias. For example, we can hear some licks from Rosina’s aria “Una voce poco fa” from The Barber of Seville. But Rossini tailored this aria to be fit for a queen. The composer also decided to have the chorus join the soloist for a grand effect.

In Rossini’s operas, things can get a little crazy. There are so many hilarious plot twists and mix-ups that the man is certainly one of the forefathers of situational comedy. In La Cenerentola, Rossini’s Cinderella opera, the prince, Don Ramiro, has disguised himself so that he can find a spouse who loves him for him, not his title or his wealth. In the Act II sextet “Questo è un nodo avviluppato,” the characters sing about what a twisted knot the plot has become when it’s revealed that Don Ramiro was in disguise and in love with the title character.

Like many opera composers, Rossini turned to the great Renaissance poet Torquato Tasso for inspiration. Armida is based upon Tasso’s epic Jerusalem Delivered. Armida is a Saracen enchantress who lures men to her magic island, a la Homer’s Circe and Ariosto’s Alcina. In the opera, Armida ensares Rinaldo, a Christian warrior.

Before Charlton Heston parted the Red Sea in The Ten Commandments, Rossini composed an opera of epic proportions, Mosè in Egitto. The opera was so popular he adapted it in an even more grand version for Parisian audiences called Moïse et Pharaon almost a decade later. One of the most spectacular musical and dramatic moments is, not surprisingly, the parting of the Red Sea. At the end of Act III, Moses prays for assistance when he believes the Sea will stop his people, who are pursued closely by the Egyptians, from reaching the Promised Land. The musical “preghiera” (prayer) that concludes the opera “Dal tuo stellato soglio” is miraculously beautiful.

The name of this opera, which translates to Lady of the Lake, may make you think this opera is about the character of the same name from Arthurian legend. But, this opera is inspired by the poem by Walter Scott, who incidentally also wrote the famous Bride of Lammermoor, the source material for Donizetti’s Lucia di Lammermoor. Even if the story isn’t as well known as the adventures of King Arthur, there’s certainly some memorable music in Rossini’s La donna del Lago. When the main character, Elena, saves both her father and her beloved, she expresses her joy in a thrilling rondo, “Tanti affetti in tal momento!” that concludes the opera.

Though one author considers Maometto II to be “the best of Rossini's Neapolitan operas,” it has not been performed often in the 21st century. Set during wars between the Venetians and Turks, Rossini toned down some of the political elements of the drama so as not to make too many direct connections between the political situation in Naples, which was ruled by Ferdinand I of Spain. One of the most remarkable features of the opera is the giant trio in Act I, "Ohimè! qual fulmine.” A performance of the piece lasts anywhere from 25 to 30 minutes. It’s so long that Rossini had a special name for pieces like this – "terzettone” – which roughly translates as a “big ole trio.”

Rossini is certainly known for his comedy, but few are as bawdy as Le comte Ory. Set in the Middle Ages, the title character, Ory, disguises himself first as a hermit and later as a nun in order to get closer to the woman he loves, the Countess Adèle. At the end of the opera, Ory finally slips into Adèle’s bedroom. Unfortunately for him, so has his page, Isolier. “A la faveur de cette nuit obscure” (“Taking advantage of this dark night”) is a musical ménage à trois performed by all three.

Though many remember Rossini for his vocal music, his opera overtures show his skills as writing for the orchestra alone. Some of his overtures were so popular that he re-worked or re-used them in later operas. Others, like the overture to Guillaume Tell are mainstays of symphony orchestras around the world. Its overture has four sections, “The Dawn,” “The Storm,” “The Cow Call,” and “The March of the Swiss Soldiers.” Though one section is often used in commercials, TV shows, and movies to depict the rising run, it’s not “The Dawn,” it’s “The Cow Call.” Even more famous, however, is “The March of the Swiss Soldiers,” which has been used in countless other media, most notably as the theme song to The Lone Ranger.

70th Anniversary Special: Interview with Almita & Roland Vamos
Lyric Returns With Free Star-Studded Virtual Gala
In the Age of the Visual Album, What Can Opera Learn from Beyoncé?
'No path is easy': Black opera singers detail struggles
Strike Up the Wind Band: Celebrating 50 Years of the Northwestern University Symphonic Wind Ensemble
6 Classical Music and Wine Pairings That Are Sure To Soothe Your Soul