Writer and oral historian Alan Wieder recently visited the WFMT studios to discuss his new book about long-time WFMT host, free-spirit and renowned oral historian Studs Terkel. Wieder’s book is the first attempt to synthesize many facets of Studs’ life and contains many new insights about his life and times, including stories and details about Studs’ 45 years at WFMT and anecdotes by former and current WFMT staff and colleagues of Studs such as Lois Baum, Tony Judge, Andi Lamoreaux, Sydney Lewis, Andrew Patner, David Polk and Steve Robinson. Wieder talks about the process of researching and writing the book as well as his perspective on Studs’ cultural and social contributions with Tony Macaluso, Director of the Studs Terkel Radio Archive / WFMT Radio Network. The program also features musical excerpts from some of Studs’ favorite performers such as Big Bill Broonzy, Woody Guthrie, Mahalia Jackson and Elisabeth Schwarzkopf. Read a partial, edited transcription of their conversation below.

Tony Macaluso: Studs' interests were almost limitless. There are a few topics. Food is one of the few that I rarely find Studs talking about, but science Studs could talk with the best scientists Carl Sagan, Jacques Cousteau, Jane Goodall about the intricacies of science. He could talk about education reform. He delved into gay rights long before that was a topic that almost anyone in the mainstream media would deal with. Studs certainly had a soft spot of real passion for baseball. And let's talk a bit about that it's perhaps an auspicious year in Chicago baseball and Studs was very much a fan.

Alan Wieder: Baseball stuff is great because he probably didn't like the hated Cubs more but he didn't like the White Sox either. He was in John Sayles movie in 1988 I think, Eight Men Out. It was perfect typecasting. He played a sports journalist and it was a movie about the Black Sox scandal and his character is keeping score and trying to figure out which players are throwing the game and he just got so into it. And when when Sayles asked him to be in the movie he said, “Great, let's get that Comiskey!” You know he was still remembering from the past.

And then I think it was on his 90th birthday he was asked to throw up the first pitch at a White Sox game. He watched enough baseball that he knew it could be embarrassing to throw out the first pitch. I mean people throw it into the stands; people throw out, just bad pitching. And so he worked out with his neighbor Laura Watson. She had one of her kids catcher's mitts and gave Studs a mitt and he just kind of built up distance because he wanted it to get in the catcher's glove. I mean, there is a vanity to Studs Terkel and that was part of it.

So that was a big thing and then the other thing with baseball was that he was one of the talking heads in Ken Burns series on baseball. And one of the amazing things about that was when I interviewed Ken Burns he told me, “You know I wouldn't have done the work that I do the documentary work if there wasn't a Studs Terkel. It was his work that set up the foundation for me to do my work. I feel much the same way as an oral historian.”

Macaluso: Now here WFMT, we're fortunate to have had Studs as our resident free spirit for four and a half decades and then really up until the end of his life. We are in the process of building his entire radio archive 5,600 program as it stands recorded between 1952 and 1997 and the range of people that Studs talked to: not just famous people schoolteachers, workers, miners but also a tremendous range of different types of writers and musicians. Simone de Beauvoir, Martin Luther King, Louis Armstrong, a young Bob Dylan. Muhammad Ali. And let's talk about Mohammad Ali speaking about race and work and other topics. 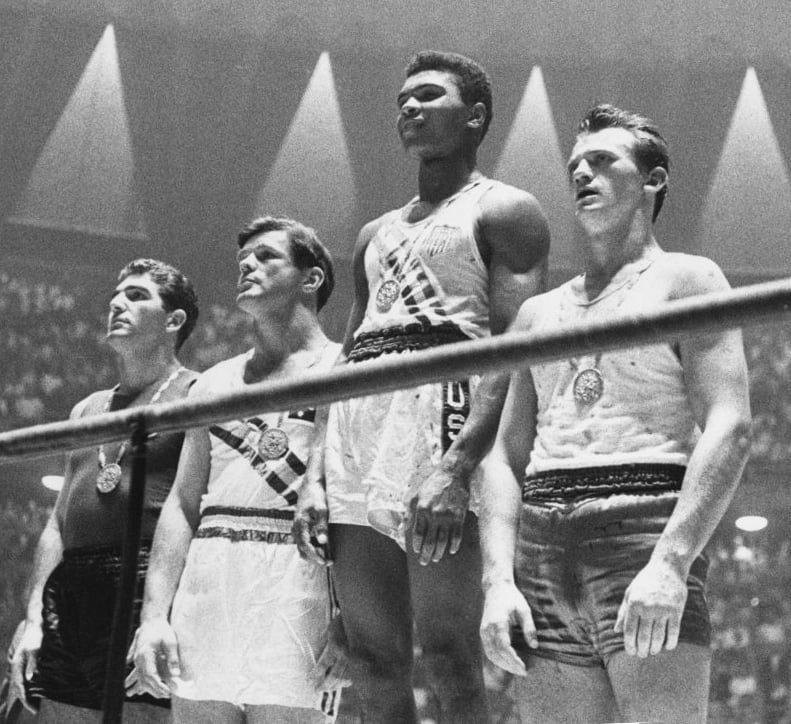 Ali, then known as Cassius Clay, at the 1960 Olympics (second from right)

Wieder: Yeah. I mean it's so hard to say this is my favorite interview but the interview with Muhammad Ali in 1978 was great so I want to read just a couple paragraphs about that.

“Studs' 1975 interview with Muhammad Ali represents the quintessential Studs Terkel interview: culture, politics, class, and race are all addressed within the framework of genuine conversation. It is evident from the start that Studs has carefully read Ali's book The Greatest.

“Throughout the segment he honors Ali's words they talk about racism as Ali explains to Studs why he threw his Olympic gold medal into the Ohio River after being refused service at a restaurant in his hometown. Studs asks Ali about the ramifications of refusing army induction during the Vietnam War. When Studs asks about not taking the safe way out, Ali's response is: ‘I took the safe way out, not going.’”

I think those are the kind of things that Studs gets people to say. There's this honesty that you don't necessarily do when you're on the radio.

Macaluso: And I'm so glad you chose that example. The Muhammad Ali interview is one of those interviews that when you start to listen to it at first, there's really no safety net it's not clear where this is going to go. They don't connect initially in fact. Mohammad Ali is doing his bravado floats like a butterfly sting like a bee type of thing. And he's not really listening to Studs, Studs isn't quite getting through.

I recall when I first heard that interview, the moment that really struck me is when, at some point, Studs is persistently still trying to get Muhammad Ali to really pay attention to really connect and Muhammad Ali pauses and he's catching on. This isn't the typical interview, there's something about this guy sitting across from me, he may look like he's an old white guy and he's asking me questions, but these aren't the usual questions.

Muhammad Ali turns to him and says, “Who are you, the elder Howard Cosell?” (the famous sportscaster back then). Studs becomes indignant in a way that I almost never hear him get in an interview and he snaps back at Muhammad Ali and says, “Never heard of him. I'm my own man. You're your own man. He's his own man. That's your credo right?”

He really chastises Muhammad Ali and insists, “Listen if I'm going to respect you, you're going to respect me.” The whole tone of the conversation just shifts. Muhammad Ali starts talking about the experience of pain as a boxer and the feeling in his knuckles, and his knees, and his jaw. It's an incredible moment where you need that long space in that room for things to evolve in unexpected directions and a bit sort of impertinence that Studs also cultivated.

Macaluso: Studs' curiosity was global. Race in particular was one of the lenses through which he really saw the struggles and the injustice of the world. And people are sometimes surprised at least in Chicago that Studs was as cosmopolitan as he was. He so embodied Chicago in the streets and the buses with his cigar and his flattened hat and so forth. But the reality is that Studs was also an incredibly wide ranging, wide traveling, global voyager. He made trips to the Soviet Union, to Italy, to France. But his first big trip out of the United States came in the early 60s to South Africa

Wieder: One of the things that's interesting about that also it was the same year that he documented the March on Washington. So you had both of these things going on. Studs was asked to go to South Africa by the German airline in 1963. They were doing some promotion and they wanted to take journalists. And it turned out I think they took five journalists total. From what I could research, he was the only one that acted as journalist. He actually struggled in his own mind as to whether he should go or not. And this was long before boycott divestment stuff. He thought, “Should I go to South Africa. It's an apartheid regime. If I go there am I showing support for that?”

Something got him to go I don't know if it was Ida. I could never get a handle of why he made the decision to go. I really am not sure that he ever knew in his life that 1963 was the most intense year of the apartheid era until 1976. It was the year of many, many arrests. It was the year before a huge trial. But Studs went and he had his tape recorder everywhere he went.

Just like in the United States he talked to people that were people on the ground people whose names we never heard of. He interviewed miners in South Africa. That's unheard of that he was able to get in and interview black miners who weren't even South Africans. They came from other countries in southern Africa to work in the mines because it was easier to exploit them. And he interviewed them and they were on his show on WFMT. He interviewed white artists who talked about, “Well, yes apartheid is a bad system, but we all do know it does us does us good.” But the most famous person he interviewed was the head of the African National Congress who had just won a Nobel Peace Prize, Albert Lutuli.

In the US, when he started writing oral histories, he called people “scouts” who he found to interview. And I dare say this because I don't think he can ever call Nadine Gordimer who also you know won a Nobel Prize for Literature a “scout,” but she was for Studs. It was Nadine, in a very, very spy-like way, that got him to chief Albert Lutuli. She set up this thing and Studs literally was told to go to a phone booth and wait for a call because Albert Lutuli was under house arrest at the time and he wasn't allowed to have visitors.  But she told him you will get to see him and to talk to him you just have to do everything this way, and they snuck him there to talk.

Studs and Nadine became lifelong friends and she was on his show many times. So it was not out of character for him to be there and do everything that he did there.