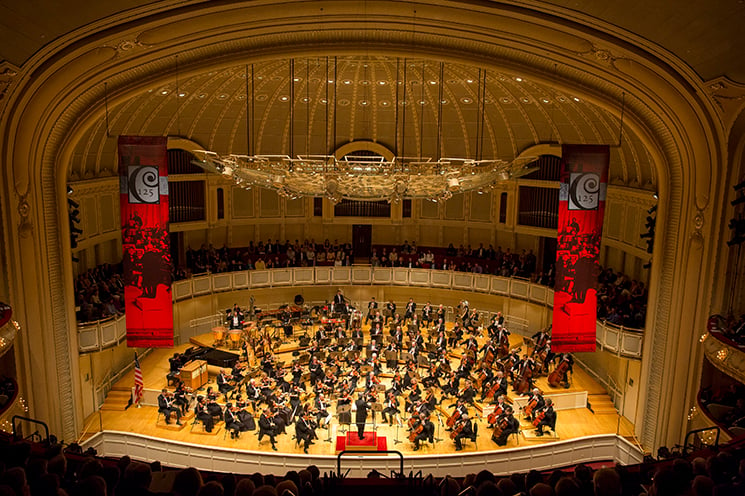 The Chicago Symphony Orchestra Association announced the results from the 2015-2016 fiscal year at its Annual Meeting, which took place October 26, 2016 at Symphony Center. The organization posted a deficit of $1.1 million, though ticket sales for the CSO Main series hit record highs.

The CSOA reported that overall ticket sales were down slightly to $22.2 million from last year’s $22.7 million for CSOA-presented events. However, CSO Main series ticket sales hit a record $15.4 million in revenues.

The subscription renewal rate for the CSO Main series totaled 90%, which the orchestra said is among the highest rates for any American orchestra. Single ticket sales for the main stage also hit a record at $6 million. Average paid capacity for CSO Main stage concerts was 80%, slightly down from last year’s 82%.

Approximately 460,000 people attended CSOA concerts, including those who attended the 263 free events both in Symphony Center and all around the Chicago area. These took the form of chamber and Civic Orchestra concerts as well as major community concerts such as the free Mahler concert in Millennium Park in 2015, which was broadcast live by WFMT.

The CSOA’s overall operating revenue totaled $71.9 million, though operating expenses totaled $73 million, leaving a deficit of $1.1 million. This year’s operating deficit, totaling 1.5% of operations, is down slightly from last year’s of $1.3 million.

The organization’s overall assets at year end total $489 million, with $247 million net assets. The endowment grew to $271 million after $9.4 million in gifts during the fiscal year.

The above figures do not include performances or revenue from the CSO’s summer home, the Ravinia Festival, which is a separate organization.

The 2015-16 year marked the Chicago Symphony Orchestra’s 125th anniversary season. The meeting summarizing the season’s financial and artistic highlights was led by CSOA President Jeff Alexander, as well as Helen Zell, who was re-elected as Chairman.

At the meeting’s conclusion, attendees were treated to a live performance by CSO members Aiko Noda (violin), Wei-Ting Kuo (viola), Dan Katz (cello), and Alex Klein, who recently rejoined the orchestra as Principal Oboe. The ensemble presented the “Rondo” of Mozart’s Oboe Quartet (K370), and thanked the assembled trustees and supporters.

Crediting the strong organizational and community support of the orchestra, Klein remarked how the orchestra had gotten better in his time playing there, and promised that “as good as the orchestra sounds now, let me promise this: you have not heard the best of us. We will play even better.”