The  latest collaboration between Lyric Opera of Chicago and Second City is LONGER! LOUDER! WAGNER!, which runs through Sunday, October 30 at the Civic Opera House.

Actor Tim Ryder, who appeared in The Second City Guide to the Opera  (also in collaboration with Lyric), said: “This show tells two stories in parallel: the story of Richard Wagner as he creates the Ring Cycle, and the story of my character, Fred Wagner who lives in Schaumburg, IL. He is the great grandson of Richard and he gets the opportunity to direct a production of The Ring Cycle. But he tries to do it without falling into the same pit of madness as his ancestor.”

“My character starts off very un-Wagner,” Ryder said. “He tries to push away from Richard Wagner as much as possible. He works in opera, but he does happy, friendly opera that lets you leave the theater humming. Then he gets the opportunity to direct The Ring Cycle, and he becomes more like Richard.”

Cast in Fred Wagner’s production of The Ring is Valerie, played by singer and Ryan Opera Center alumna Tracy Cantin. “My character is kind of an every-day girl who works downtown. She sees an audition notice for the Schaumburg Lighter Opera Works company. They’re casting for The Ring and it’s always been a dream of hers to perform in it, but she doesn’t think she could. But she gets cast, and in this show She sings music from the operas, including the famous “Ride of the Valkyries” and Brünnhilde’s immolation scene.” 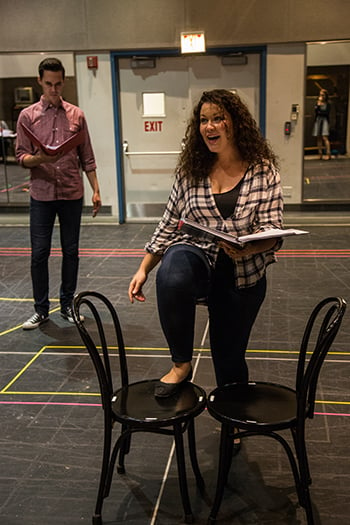 Though Cantin typically performs in operas, LONGER! LOUDER! WAGNER! is not her first foray into improv. Cantin worked with Timothy Sniffen, who wrote the script to the show, when she was a member of the Ryan Opera Center.

“For two full summers, he taught us improv several times a week,” she said. “I think that really expanded my horizons. At first we did a lot of fundamentals of acting and silly warm ups. We did a lot of mirroring exercises with partners, too. It was hard for all of us to give up control and just be in the space. It was really interesting how quickly he bashed through our exteriors and created a fun, safe environment.”

Cantin said she is enjoying her time working with Second City on LONGER! LOUDER! WAGNER! immensely, though admitted, “If you had asked me several years ago if I would be involved with a Second City show, I would’ve laughed.”

Cantin isn’t the only one who has expanded her horizons through this collaboration. Ryder said, “I think I am like a lot of American kids. My first introduction to opera was cartoons and, ‘Kill the wabbit!’ Since I’ve been working on these shows with Lyric, I’ve learned so much about different composers and works, and also that operas are just human stories on a grand scale.”

In the Age of the Visual Album, What Can Opera Learn from Beyoncé?
Enrique Mazzola on Returning to the Stage, Taking the Reins at Lyric
Lyric's '22-23 Season: Verdi, 'Fiddler,' Fleming, & 'Carmen'
9 Works by Women Writers We Want to See Adapted into Operas
Sing Different: Why the Life of Apple's Steve Jobs Makes for Great Opera
Lyric Announces 2021-22 Season With 'Magic Flute,' 'Macbeth,' Mazzola