The 2017 Pulitzer Prize winners and finalists:

New York Daily News and ProPublica for uncovering, primarily through the work of reporter Sarah Ryley, widespread abuse of eviction rules by the police to oust hundreds of people, most of them poor minorities.

Also nominated as finalists: The Chicago Tribune for reporting on prescription drug dispensing; and the Houston Chronicle for coverage of cost-cutting that denied tutoring, counseling and other special education services to families.

East Bay Times in Oakland, California, for coverage of the “Ghost Ship” fire, which killed 36 people at a warehouse party.

Eric Eyre of the Charleston Gazette-Mail in West Virginia for reporting to expose the flood of opioids flowing into depressed West Virginia counties.

Also nominated as finalists: Michael J. Berens and Patricia Callahan of the Chicago Tribune for a series that documented neglect and abuse at Illinois group homes for developmentally disabled adults; and Steve Reilly of USA Today Network for an investigation that found 9,000 teachers who should have been flagged for past disciplinary offenses but were not.

International Consortium of Investigative Journalists, McClatchy and the Miami Herald for the Panama Papers, a series of stories using a collaboration of more than 300 reporters to expose the hidden infrastructure and global scale of offshore tax havens.

Nominated as finalists: Joan Garrett McClane and Joy Lukachick Smith of the Chattanooga Times Free Press for an examination of income inequality; staff of National Geographic, Washington, D.C., for an exploration of gender; and Julia Angwin, Jeff Larson, Surya Mattu, Lauren Kirchner and Terry Parris Jr. of ProPublica for an examination that made tangible the abstract world of algorithms.

Also nominated as finalists: Jenna Russell, Maria Cramer, Michael Rezendes, Todd Wallack and Scott Helman of The Boston Globe for a look at how the closing of psychiatric hospitals led to deadly encounters with police; and Michael Schwirtz, Michael Winerip and Robert Gebeloff of The New York Times for showing that minority inmates were punished at a far higher rate than white inmates.

David A. Fahrenthold of The Washington Post for reporting casting doubt on Donald Trump’s assertions of generosity toward charities.

Also nominated as finalists: The Atlanta Journal-Constitution staff for a series revealing the prevalence of sexual misconduct by doctors; and Renee Dudley, Steve Stecklow, Alexandra Harney and other members of the Reuters staff for uncovering a U.S. college admissions process corrupted by systematic cheating on standardized tests in Asia.

Also nominated as finalists: Chris Hamby of BuzzFeed News for an exposé of a dispute-settlement process used by multinational corporations; International Consortium of Investigative Journalists, McClatchy and the Miami Herald for the Panama Papers (moved to the Explanatory Reporting category); and The Wall Street Journal staff for coverage of Turkey.

C.J. Chivers of The New York Times for a story on a Marine’s postwar descent into violence.

Also nominated as finalists: Adam Entous and Devlin Barrett of The Wall Street Journal for telling the story of one woman’s professional ruin after years of service to her country; and Eli Saslow of The Washington Post for chronicling the divided and restive body politic.

Peggy Noonan of The Wall Street Journal for columns during one of the nation’s most divisive political campaigns.

Also nominated as finalists: Dahleen Glanton of the Chicago Tribune for pieces about politics and race in Chicago and beyond; and Trudy Rubin of the Philadelphia Media Network for commentary written in world hotspots.

Hilton Als of The New Yorker for reviews that put stage dramas within a real-world cultural context.

Also nominated as finalists: Ty Burr of The Boston Globe for reviews of films and other cultural topics; and Laura Reiley of the Tampa Bay Times for lively restaurant reviews.

Also nominated as finalists: Joe Holley of the Houston Chronicle for editorials on gun laws, gun culture and gun tragedies; and Fred Hiatt of The Washington Post for editorials about the U.S. presidential election.

Also nominated as finalists in this category were: Jen Sorensen, freelance cartoonist, for a selection of work appearing in a variety of U.S. publications; and Steve Sack of the Star Tribune in Minnesota for work that took on the biggest issues of the year.

Daniel Berehulak, freelance photographer, for images published in The New York Times showing the disregard for human life in the Philippines brought about by a government assault on drug dealers and users.

Also nominated as finalists: The Associated Press staff for images of the people of Iraq; and Jonathan Bachman, freelance photographer, for an image published by Reuters of one woman’s stand during a protest in Baton Rouge.

E. Jason Wambsgans of the Chicago Tribune for a portrayal of a 10-year-old boy and his mother striving to put the boy’s life back together after he survived a shooting.

Also nominated as finalists: Jake May of The Flint Journal in Michigan for photographs from Flint’s contaminated-water crisis; and Katie Falkenberg of the Los Angeles Times for a photo essay from the front lines of Brazil’s war on Zika.

“The Underground Railroad,” by Colson Whitehead.

Also nominated as finalists: “Imagine Me Gone,” by Adam Haslett; and “The Sport of Kings,” by C.E. Morgan.

Also nominated as finalists: “The Wolves,” by Sarah DeLappe; and “A 24-Decade History of Popular Music,” by Taylor Mac.

“Blood in the Water: The Attica Prison Uprising of 1971 and Its Legacy,” by Heather Ann Thompson.

Also nominated as finalists: “Brothers at Arms: American Independence and the Men of France and Spain Who Saved It,” by Larrie D. Ferreiro; and “New England Bound: Slavery and Colonization in Early America,” by Wendy Warren.

“The Return,” by Hisham Matar.

Also nominated as finalists: “In the Darkroom,” by Susan Faludi; and “When Breath Becomes Air,” by the late Paul Kalanithi.

Also nominated as finalists: “XX: Poems for the Twentieth Century,” by Campbell McGrath; and “Collected Poems: 1950-2012,” by the late Adrienne Rich.

“Evicted: Poverty and Profit in the American City,” by Matthew Desmond.

Also nominated as finalists: “In a Different Key: The Story of Autism,” by John Donvan and Caren Zucker; and “The Politics of Mourning: Death and Honor in Arlington National Cemetery,” by Micki McElya.

Also nominated as finalists: “Bound to the Bow,” by Ashley Fure; and “Ipsa Dixit,” by Kate Soper.

Trio Celeste [Rebroadcast]
19 African American Composers to Celebrate on Juneteenth (and Every Day of the Year)
In the Age of the Visual Album, What Can Opera Learn from Beyoncé?
A Toast To the City of Classical Music: Living a Musical Life in Vienna
Benny Kim and Grace Fong
Decade in Review: The 2010s and Classical Music 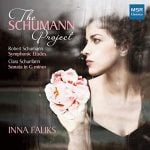