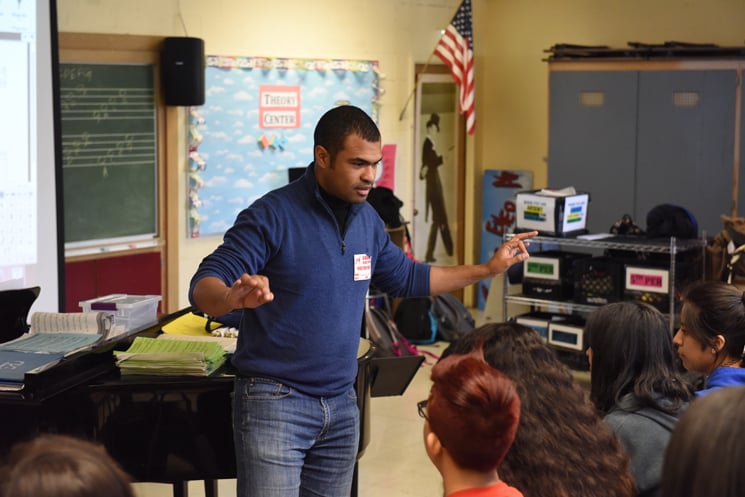 “Music is the perfect way to get to know other parts of the world,” said composer Rodrigo Cadet during a visit to Chicago from his native Mexico. “Sometimes you don’t have the time or means to travel to another place, but music can help you to do that.”

As part of a yearlong residency, Cadet has been sharing his music and Mexico’s many musical traditions with students from three Chicago schools: Pilsen Community Academy, Horizon Science Academy (McKinley Park), and Hubbard High School. The residency is part of ¡Cantaré!, a program presented in partnership with Minneapolis-based Vocal Essence and Chicago a cappella.

Cantaré! “is designed to teach students about Mexico through its artists. Even though Mexico and the United States are neighboring countries, sometimes we don’t know too much about each other,” Cadet said. “Part of the residency consists of giving the students the opportunity to interact with someone who’s actually from Mexico so they can learn whatever they like.”

Having the opportunity for Chicago students to learn more about Mexico is important, Cadet said, because the city has “such a variety of students. The ones who come from Mexican families or who have some relationship with Mexico identify with me on certain levels. It places them in a good position to share things about themselves with their fellow students.” 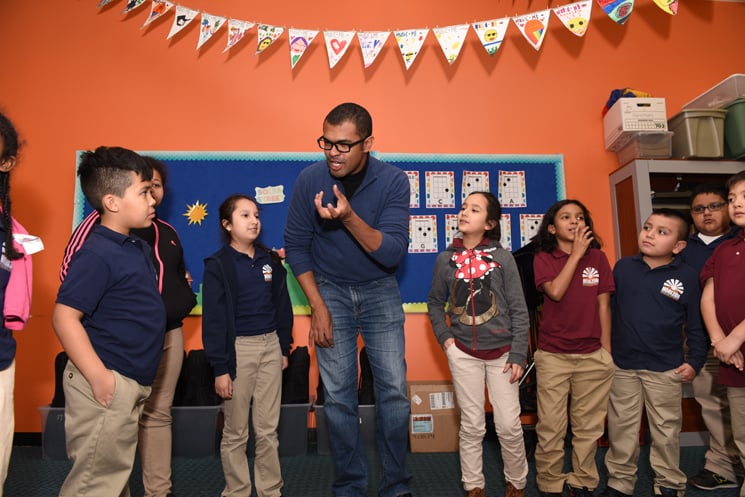 “Chicago has a large Latino population and Mexican population in particular,” Cadet observed. “A lot of kids might know they have something to do with Mexico because they came from there directly or still have family there. But sometimes they are not that aware of some traditions that are part of being Mexican.

“It’s interesting to meet people who identify with both being American and being Mexican,” he continued. “There’s such a mixture of cultures in Chicago, it can be hard to find a balance between exploring your roots and the situations that you find in during your daily life. But that’s how you form your identity, and kids need to do that too. I feel like that’s the real power of working with the kids. It allows them to learn more about their art, and their background, if they have Mexican heritage.

“For the others,” who feel less of a connection to Mexico, he said, “it can help them become aware more of ‘otherness.’ Especially today, we need to be aware of the ‘others.’ Who are these ‘other’ people? Where do they come from? Why are we all living here together? It helps with you strengthen your self-confidence and how you participate in society.”

Cadet’s astute observations about how music can help young people grow come, in part, from his work with young people in Mexico. He teaches at the Panamerican University in Mexico. He also conducts the Schola Cantorum de México, which consists of several vocal ensembles for young singers of different levels and voice-types. In addition to regular season concerts, the singers also participate in opera productions that feature a children’s chorus.

“When you want to learn about how human beings interact with each other,” he said, “just look at a choir. In order for something to really work, you need to identify yourself within the context of the group. You may have 15 or 20 kids who sing really well, but to have a good choral sound, each one of them has to make a small sacrifice to blend with the others. It helps kids not only share music, but to reach a goal together.”

And music, he says, is one of the perfect goals for young people to reach together. “Exposing children to a social activity where they can know other parts of the world and from different times is a full experience. You get to know about history, about geography, about other arts. Everybody wins. It’s the perfect combination to help us grow.”

Cadet’s Cantaré! residency culminates in a performance on May 12, 2017 by Chicago a cappella and the students with which he has been working throughout the school year. The program includes the premiere performance of his new work, “Este, ques ves, engaño colorido,” by Chicago a cappella. The piece sets a sonnet by 17th-century Mexican poet Sor Juana Inés de la Cruz. The students of Pilsen Community Academy, Horizon Science Academy, and Hubbard High School, will all perform two pieces that Cadet composed specifically for them after learning about their particular musical talents.

Learn more about Cantaré! by visiting Chicago a cappella’s website.

In the Age of the Visual Album, What Can Opera Learn from Beyoncé?
'The reach is exponentially larger': How Kamala Sankaram Brings New Audiences, Stories to Opera
Bach, Borge, Biden: Ed O’Keefe, the CBS News White House Correspondent Who Came To Play
Ryan McKinny on His Friendship, Artistic Partnership With a Death Row Inmate: 'We’re Human Just Like Him'
Grammys 2022: See All the Classical+ Nominees (And Winners)
Classical Coffeeshop