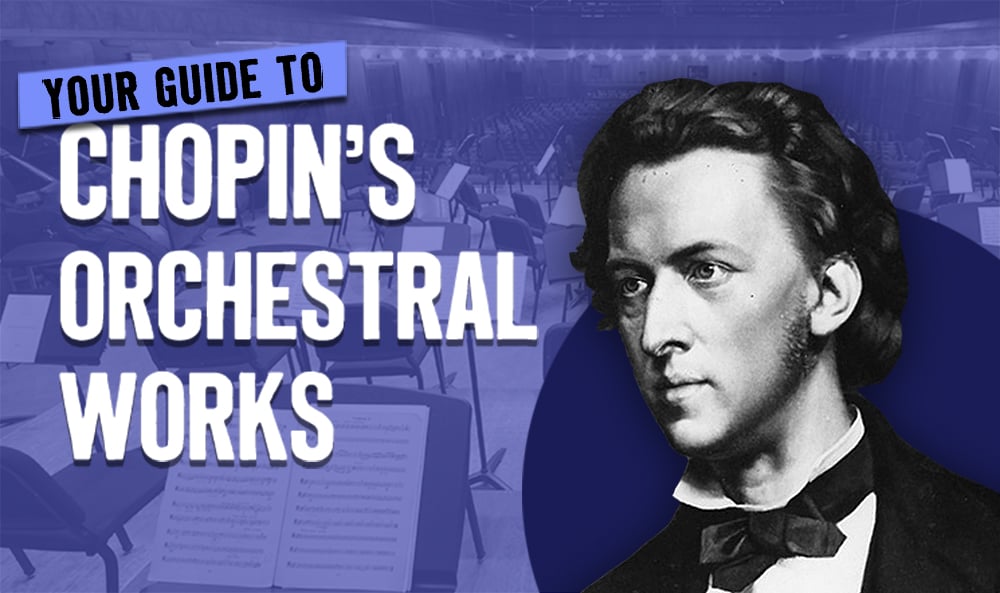 Frédéric Chopin composed six known works for piano and orchestra before he turned 25 years old. Many of these were written as assignments for Józef Elsner, his composition teacher at the Main School of Music in Warsaw. Though Chopin did not compose many works for piano and orchestra, he kept these works in his concert repertoire throughout his career.

Polish-Canadian pianist Jan Lisiecki, who recorded Chopin: Works for Piano and Orchestra for Deutsche Grammophon, suggests that Chopin regarded the function of the orchestra from the perspective of a composer wholly dedicated to the piano. In an interview with WFMT, he explained, "In a Mozart or Beethoven piano concerto, if you removed the orchestra and told the pianist to play their part alone, you'd be left with a bare-bones structure. There would be some beautiful themes, some beautiful moments, and then there would be these very dull and uninspiring passages because you would be missing the core of the work. In Chopin, if you take away the orchestra, you would still end up with a fully-fledged and well-developed work. When the orchestra comes in it adds something – another layer – not instead of the piano, not in place of one of the piano themes or capabilities, but yet another layer, and more beauty." 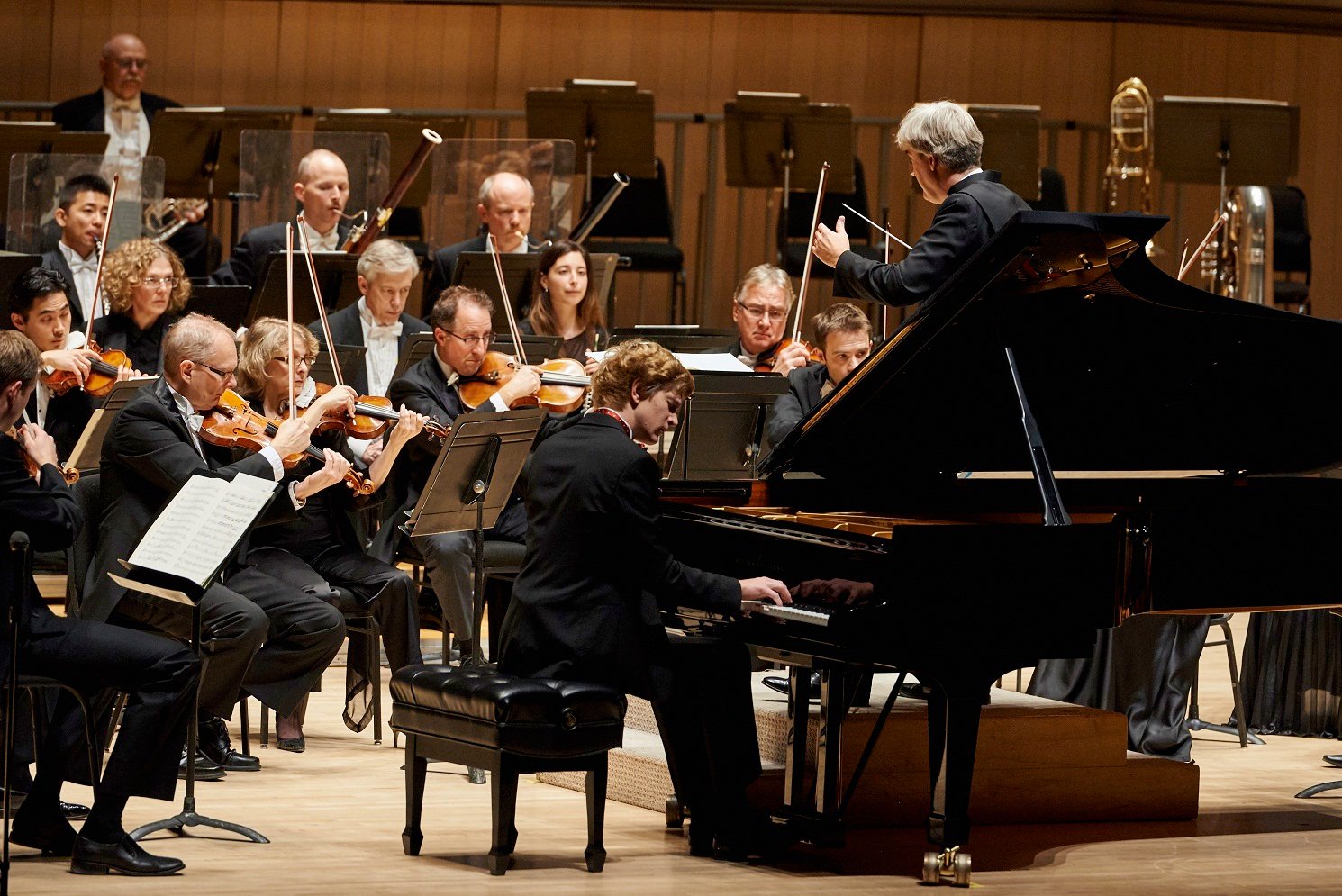 Moreover, Chopin had a very particular vision as an orchestrator. "He'd write small details that were very important but could never be heard in the modern concert hall and are even difficult to register on a recording. For example, there are solos by woodwind instruments that don't have the power to project and don't have the power to actually be louder than the piano, especially the modern pianos. We're dealing with writing that sometimes is very thin." Nevertheless, Chopin's writing for orchestra does often accomplish the magical job of augmenting what is already a fleshed-out composition for piano solo. "It's not writing that uses the full potential of the orchestra. It's his imagination for the piano enlarged by the writing with orchestra."

Explore Chopin's works for piano and orchestra below. [Jump to playlist]

Chopin wrote a set of variations for piano and orchestra on a duet from Mozart's well-known opera Don Giovanni. He composed the variations as a 17-year old student of Elsner at the conservatory in Warsaw. It was very well received at its premiere in 1829, and an 1831 performance in Leipzig even prompted Robert Schumann to pen his famous review of the young composer: "Hats off, gentlemen – a genius!"

Pianist Jan Lisiecki notes that "between every variation, the orchestra plays an interlude, almost to welcome in the next round of the variation. Chopin's approach to the variations themselves is also fascinating. To me, it alludes to the etudes that he wrote, in that every variation presents a different technical challenge. There's a very dark variation where Chopin turns Mozart's theme into something dramatic, something painful. There are also the ones where I feel almost like I'm playing one of the Preludes, where it's just the thoughts – a very simple thought, a very quick, complete thought, but one that passes by very quickly."

Chopin wrote both of his piano concertos around 1830, but the ordering of their opus numbers reverses their completion dates. In fact, despite being published three years earlier than the supposed Concerto No. 2, the E minor concerto was the second written. The last movement of the E minor concerto is a virtuosic homage to the Krakowiak, the Polish national dance which Chopin treated again for piano and orchestra in the Op. 14 Rondo.

Chopin premiered the work in October of 1830 after some last-minute edits inspired by rehearsal sessions with a small orchestra. It was to be Chopin’s last concert before he left Warsaw for Paris, followed shortly after by the November Uprising.

Chopin frequently referred to this piece, also written while a student, as a “potpourri on Polish themes.” It incorporates melodies based on a Polish folk song called "Już miesiąc zeszedł" (The moon now has risen), a kujawiak dance, and an opera excerpt in the style of a dumka dance by fellow Polish composer Karol Kurpinski.

The composer performed the Fantasy on Polish Airs alongside the Piano Concerto No. 1 for his last concert in Warsaw before leaving for Paris in 1830. The Fantasy, which closed the program, caused an ovation which called Chopin back to the stage to bow no fewer than four times.

Pianist Jan Lisiecki comments that "the themes that Chopin uses as a basis for the fantasy were, at the time at least, very well-known in Poland. Chopin is able to weave them into one continuous work. He links these melodies that have nothing in common other than being Polish into one fantasy. Chopin had the incredible capability to always include Polish elements in his music and I think he wanted to. Most of his life he spent longing and yearning for his country after he left and could never return."

Despite the later date of its publication, this Rondo is only the second piece for piano and orchestra written under the supervision of Chopin's mentor at the Main School of Music in Warsaw, Józef Elsner. In fact, the original manuscript of the score includes three bars written in Elsner’s handwriting. At the time, in the mid 19th-century, the krakowiak dance was beginning to see acceptance in the high society ballrooms of the city, despite its folk origins.

Pianist Jan Lisiecki notices that "you have the dance-like elements and a lot of passagework for the pianist side by side with the melodies spun in the orchestra. There’s a fascinating bass that leads in places. But the soaring melodies are played by the woodwinds. And considering that I’m playing a thousand notes at once and it’s incredible passagework, I think it takes a high level of collaboration between the pianist and the conductor and orchestra to make it balanced and well-rounded."

The Piano Concerto No. 2 was actually the first of Chopin’s concerti to be written, even though it was published three years after its E minor counterpart.

Chopin began the piece in the fall of 1829, while he may have been studying the form of the classical concerto in the style of Mozart, as well as more contemporary examples by Johann Hummel and John Field (also the originator of the nocturne). Chopin’s reliance on convention is visible in his adherence to traditions such as introducing themes in the orchestra before transferring them to the piano and retaining the fast – slow-fast structure of movements. However, Chopin was not shy about adding his own voice to the storied genre. The famous second movement Larghetto takes the form of a da capo aria in the tuneful character of a nocturne, with all of the Chopinian cantilena ornaments found in his solo writing.

This piece for piano and orchestra started as the Grande Polonaise Brillante, written in 1830. Contrasting with the overtly brilliant style of that work, Chopin added the lullaby-like Andante spianato as an introduction for piano solo in 1834. The two sections come together form a fascinating pair. Chopin premiered the final version at the Paris Conservatoire in the spring of 1835, which was also his last high-profile concert as a performing pianist.