There are a few topics that can be difficult to discuss in large groups: religion, politics, and the music of Philip Glass. People tend to either love or hate Glass’s music, though few would fail to acknowledge that the American composer is one of the most influential figures in music today.

A former senior critic of The New York Times reviewed Glass’s opera Akhnaten as “one more example of going-nowhere music” that provides mere “backgrounds of continually repeated, barely varied sound patterns. They stand to music as the sentence ‘See Spot run’ stands to literature.” In the same 1984 review, he complained that, “It is as if in [Glass’s] schooling he never got beyond Hanon and Clementi, or perhaps the first prelude of Bach’s Well-Tempered Clavier.” 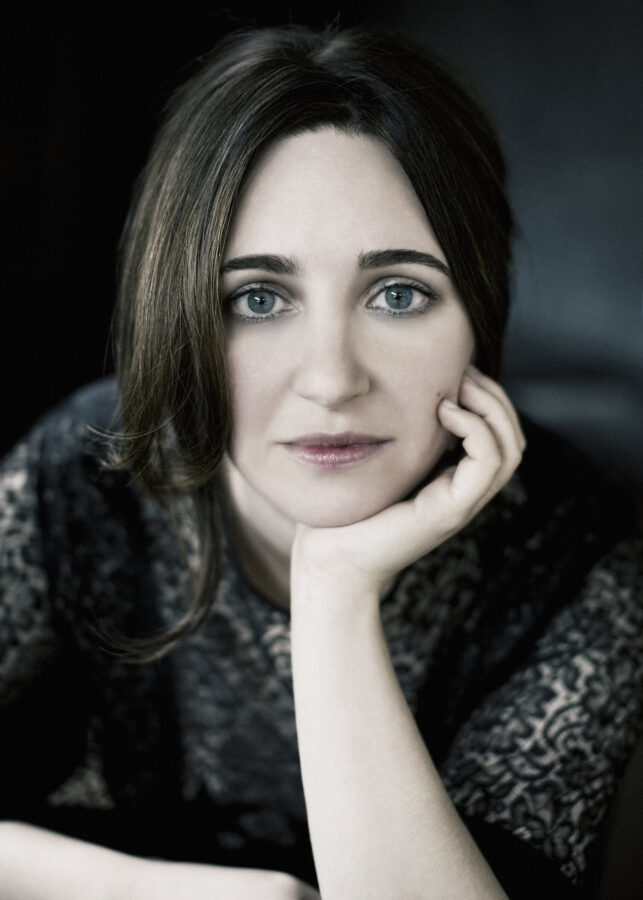 The critic got at least one thing right: there are a lot of similarities between the music of Glass and Bach. Pianist Simone Dinnerstein would certainly agree. She worked with Philip Glass to co-commission his Piano Concerto No. 3 along with Grammy-nominated chamber orchestra A Far Cry. They presented the world-premiere performance of the piece alongside Bach’s Keyboard Concerto in G Minor, BWV 1058 in Fall of 2017.

Glass’s latest piano concerto was born out of conversations he had with Dinnerstein about Bach’s music and its relevance today. When he offered to write a piece for her, she hoped for a concerto for piano and strings that could be paired with a work by Bach.

It isn’t the first time Glass had created a new work inspired by a previous one by Herr Bach. Glass’s Bach-inspired “Overture” was composed for cellist Matt Haimowitz and recorded on his album J.S. Bach: The Cello Suites according to Anna Magdalena. Glass also composed Sarabande in Common Time for violinist Jennifer Koh, riffing on the slow, stately dance that was popular during Bach’s time.

Dinnerstein explained some similarities between music by both composers, despite the fact that they lived centuries apart: “Bach’s music is really built on patterns; sequences of patterns and layering of different patterns amongst various voices, and all of these different patterns are built up to create a larger structure. That’s really what Glass is doing in his own way. The patterns that he’s using are, of course, different ideas than in Bach, but the basic concept is really very similar.”

When looking at a score of Glass’s music, the repetitive structures that he uses are immediately apparent, even to those who don’t know how to read music. But there’s much more than first meets the eye.

“Inner voices are very important, and so is the bass line,” Dinnerstein said. “In this concerto, the double bass part and the very lowest part of the left hand of the piano are really very important. Basically all of the music is coming from the bottom up. I would say the same is true with Bach. It’s all coming from the bass and the bass line. The inner voices often act as expressive devices, adding in dissonance or a counter melody of some kind that adds another layer of depth to the whole texture. In the concerto, he’s often using the second violin or the viola to do that. I think in many ways, the first violin is the least significant part of the texture, and I often feel that way with Bach too; that the lower voices are more interesting for some strange reason,” she chuckled.

Despite similarities between these two concertos, there are, of course, significant differences, too. “Glass’s concerto is essentially a sextet with piano and five string lines. It’s different than the Bach, which is four string parts, so the double bass doubles the cello. But in the Glass, the double bass has its own separate line,” she said.

“The Glass is more lush than the Bach, and part of that comes from having that separate double bass line. The other aspect that makes it have so much color is that Glass uses the entire range of the keyboard. I use some of the lowest notes on the piano that I’ve ever had to play, and also some of the highest notes. It has a lot of range. Even the first violins and second violins, there’s one moment in the second movement when they have to get ridiculously high (and everyone’s petrified of that moment!). That creates a lot of texture.”

Another difference between the music of Glass and Bach? Since Glass is still actively composing, performers can have a literal dialogue with him about his music, rather than wondering, “What would the composer want?”

After Glass completed his initial draft of the concerto, he sent it to Dinnerstein, and then, a couple of weeks later, invited her to his home to play it. “Of course I feel nervous playing for him; I feel nervous playing for any composer,” she admitted. “But I feel like he’s a really open person. He’s very generous with his music. He feels the person playing it has a lot of power and ownership of it while they’re playing it.”

“I played the whole piece, I tried to play all the parts, and it was the first time he heard it without him playing it. He decided that it needed some changes, and he made some pretty big changes in the third movement while I was there. Then he had me play the entire concerto with the changes, and I thought that was really fascinating,” she said. “I’ve always wondered how composers think about movements and the relationship to the whole. This really proved to me how important that is. It wasn’t enough for him to hear me play the changes in the third movement, he needed to hear how it related to the whole piece in real time. I really liked being part of that.”

The work evolved up until its premiere, and is evolving still. “We rehearsed it right before the premiere, and then he made some more changes. We played the premiere with those changes and I did not really like the changes, so I didn’t really know what to do, because I didn’t want to play it with those changes. I got in touch with his assistant, who said, ‘Do it how you want to do it. He would want you to do it how you want.’ So the recording is without those changes. Since then, I’ve been playing it with different orchestras, and we keep discovering other questions. One thing we found was a mistake, it was a dissonant note – essentially a typo – and I loved how it sounds, so I asked if we could keep it and he said, ‘Yes!’ So now the mistake has become the right note.”

When composers explore complex harmonies that go beyond what you might find in a four-part Bach chorale, it can sometimes be difficult to tell whether or not certain notes are intended dissonances or printing errors. “Some of the mistakes in the score were clearly mistakes – we could’ve been playing two different chords that didn’t make any sense. One of those was actually caught on the recording,” she admitted. “We unfortunately didn’t find out the truth of that chord until after the recording.”

“This piece has taught me a lot about being free and being open to spontaneity and the moment of performance in a way that I haven’t really felt with a lot of other music,” Dinnerstein mused. “It encourages me to take risks when I perform it because it changes every time I play it, and I hope it teaches me to do that with other music too.”