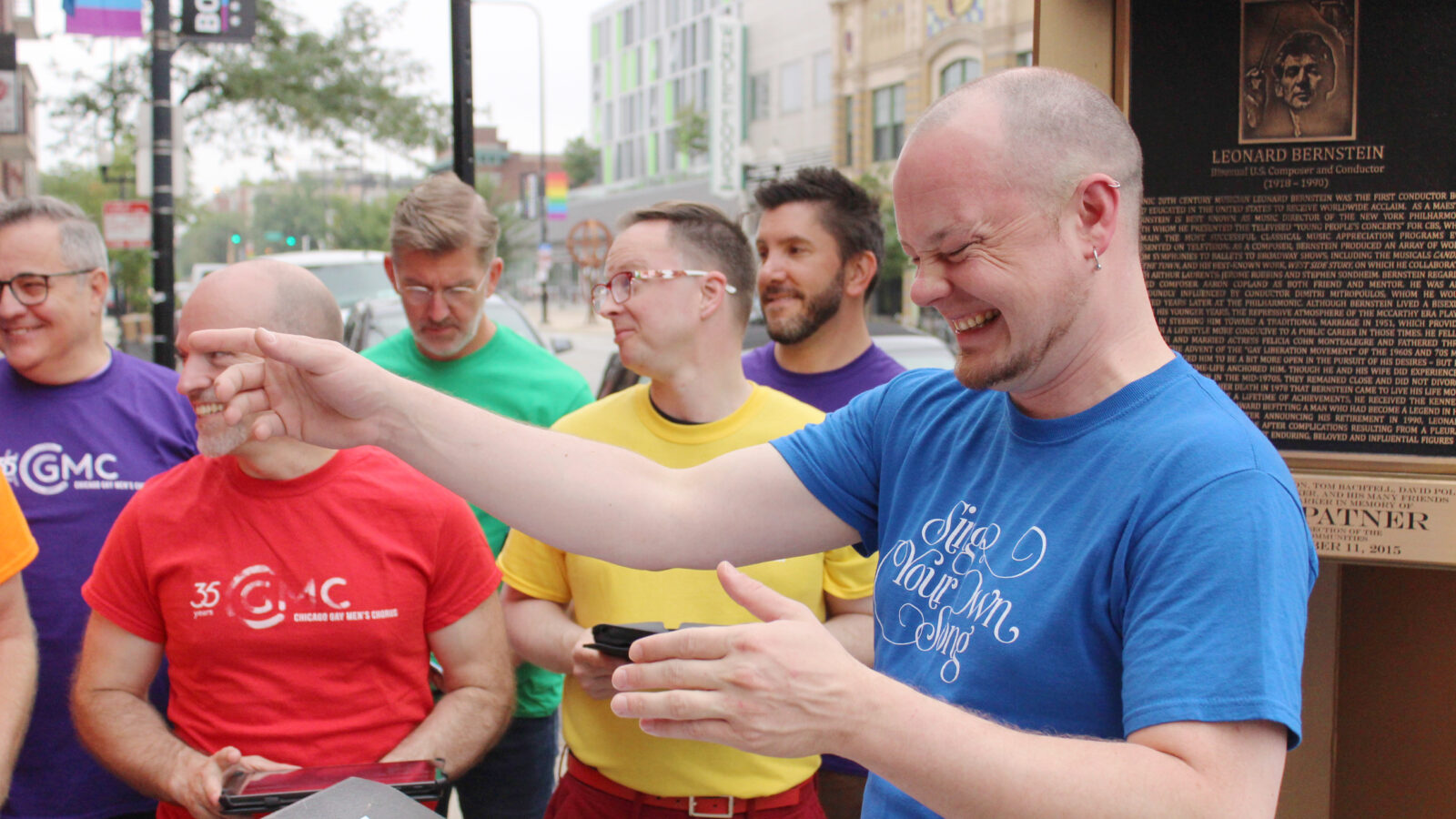 Members of the Chicago Gay Men’s Chorus and Artistic Director Jimmy Morehead prepare to perform at the Leonard Bernstein memorial plaque on the Legacy Walk.

To celebrate Leonard Bernstein’s 100th birthday, WFMT and the Chicago Gay Men’s Chorus presented a pop-up performance of “Somewhere” from the composer’s beloved musical West Side Story. The event was broadcast live from the Legacy Walk in Chicago’s Boystown neighborhood. 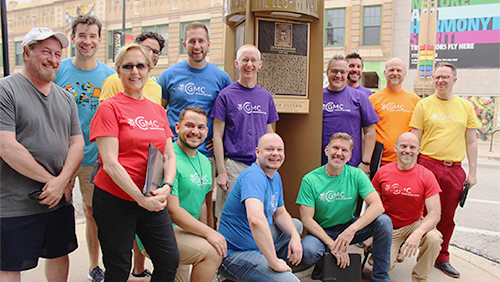 Located along 3245–3705 Halsted Street, the Legacy Walk is an outdoor history museum featuring rainbow pylons with biographical plaques that honor members of the LGBTQ community “whose achievements have helped shape the world – but whose contributions, sexual orientation or gender identity have been minimized or redacted entirely from most historical texts.”

The memorial to “Lenny” on the Legacy Walk reads that “although Bernstein lived a bisexual life in his younger years, the repressive atmosphere of the McCarthy Era played a role in steering him toward a traditional marriage in 1951. He fell in love with and married actress Felicia Cohn Montealegre and fathered three children. Though he and his wife did experience a yearlong separation in the mid-1970s, they remained close and did not divorce. It was not until after her death in 1978 that Bernstein came to live his life more openly.”

In a letter sent by Felicia Bernstein to Leonard in the early 1950s, Felicia said that she was prepared to accept Bernstein as he was: “There’ll be crises from time to time but that doesn’t scare me anymore,” she confided. “And let’s relax in the knowledge that neither of us is perfect and forget about being HUSBAND AND WIFE in such strained capital letters, it’s not that awful!” 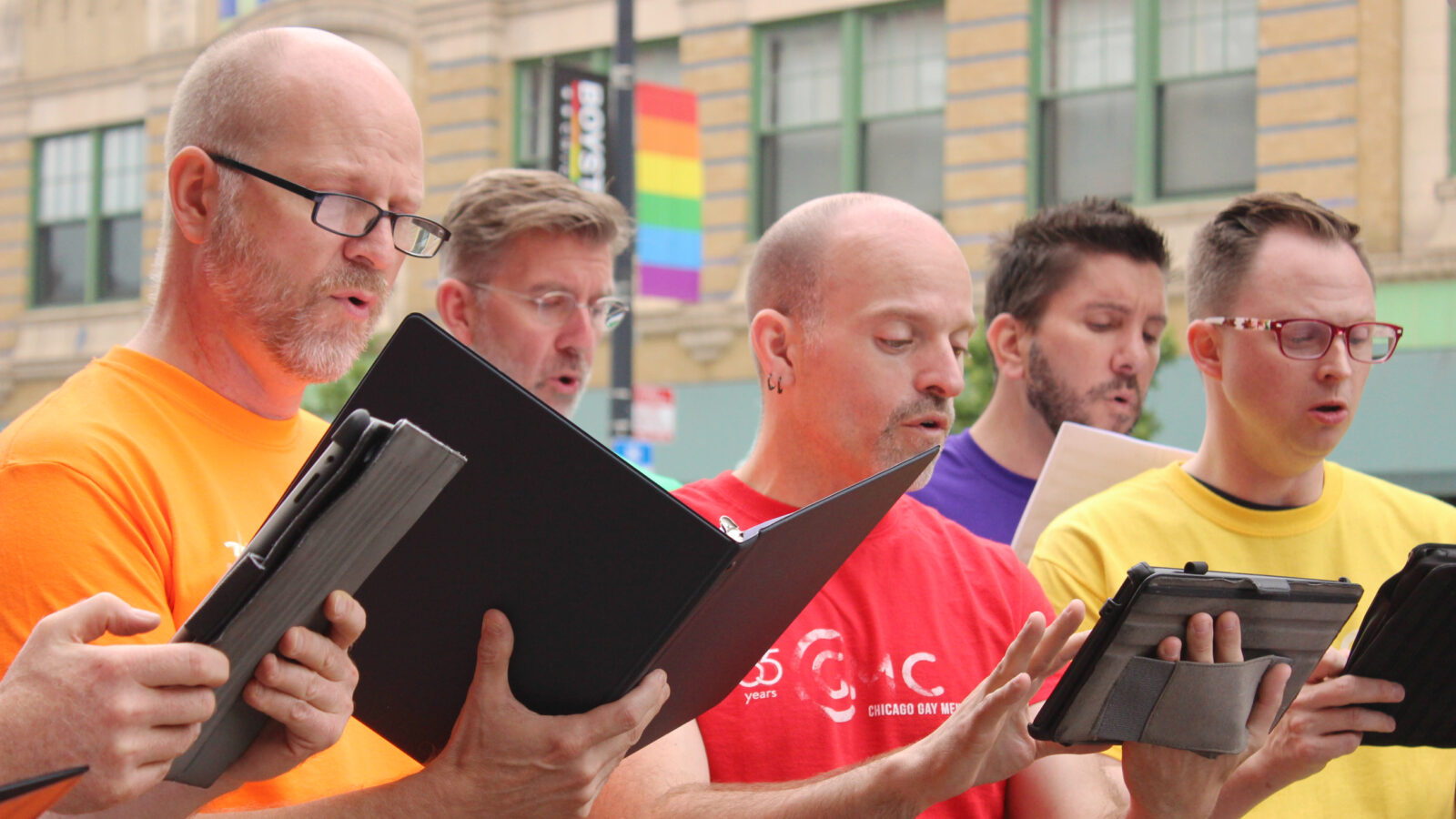 Members of the Chicago Gay Men’s Chorus perform “Somewhere” from West Side Story live from the Legacy Walk.

The Chicago Gay Men’s Chorus, led by its artistic director Jimmy Morehead, performed “Somewhere” next to the Bernstein plaque at 3641 N. Halsted. Though the day was overcast, that didn’t stop passersby from taking a moment to shine in Bernstein’s music.

The Bernstein memorial was dedicated on October 11, 2015, in the name of late WFMT personality Andrew Patner, “who lived at the intersection of the fine arts and the LGBT communities.”

15 Queer Composers You Should Know
A Walking Tour of 12 LGBTQ+ Artists Whose Legacies Are on Display in Chicago
Earth Day 2020: Stacy Garrop's 'Terra Nostra'
Grammys 2022: See All the Classical+ Nominees (And Winners)
6 Chicago Concerts and Celebrations for Juneteenth 2021
What Words Cannot Express: Ian Bostridge on the Power of Music