When many of us think of cabaret, we picture Liza Minelli as Sally Bowles, a woman enraptured in the decadence of 1920s Berlin, in the Kander and Ebb musical Cabaret. While that era helped define one aspect of the art form, singer Claudia Hommel intends to share its vast range in the first Chicago Paris Cabaret Connexion. This weeklong festival will feature performances and talks given by Chicago singers and guest artists from France.

Hommel decided to create the festival after attending a cabaret conference in France a few years ago. She was surprised what the French had to say about the art form. “Le cabaret est mort, or, cabaret is dead,” she recounted, “by which they mean there’s no circuit for cabaret venues.”

According to Hommel, cabaret is intimate; it begins with a single room. “In the 1880s, the room was probably a small tavern or wine cellar, a hangout for artists who wanted to delve deeper into poetry, symbolism in politics, or the risqué,” she noted. “The French use the word proximité, or proximity, chansons de proximité, songs that are near to you. This seems to be the universal definition of cabaret.”

Hommel is eager to share with audiences the similarities and differences between French and American styles of Cabaret. “This idea of the one-man or one-woman show is very American. For the French, it is all about l’équipe, the team. Even as you look back at the French performers in the 20th century, you would have a cabaret room with a regular team every night. There would be singers, someone reciting a poem or drawing caricatures, and before film, shadow theatre. It was literally anything that could fit in the room.” 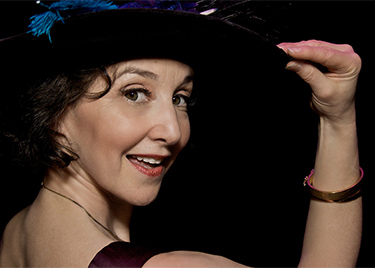 The mixture of all art forms is something that Hommel thinks is missing from modern cabaret. “There’s a disconnect, especially in academia, where theater doesn’t talk to music, and musical theatre is kind of its own thing because it doesn’t fit anywhere else. As artists, we thrive when we are thrown into the mix. In Paris in the early 20th century, you have this amazing pot with artists like Picasso and Braque, choreographers like Nijinsky, showmen like Jean Cocteau, meeting someplace. It’s all a part of the mix!”

In this festival, “We will have a session on burlesque, which is closely related to cabaret. It’s about sexual tease and ambiguity,” Hommel said. “That’s one end of it. The American songbook is on the other end, with the idea that music and text are preeminent, with a performance in an intimate setting.”

Other sessions include an evening of performances celebrating black culture in Paris at the Alliance Française de Chicago on Thursday, November 1. Michèle Barbier, former personal secretary to the legendary Josephine Baker, will also speak during a post-concert reception. The week concludes on Sunday, November 4, with a showcase at the DePaul School of Music Recital Hall.

By having a festival that explores all artistic aspects of cabaret, including discussions on the business and economics of the art form, Hommel believes there might be a resurgence of intimate performances. “My guess is that the whole face-in-smart phone phenomenon right now will hit bottom, and people will spring back to, ‘Oh, we get to do this live? Really? I want live! I want touch! I want real!’ It’s all about being part of a community that you’re creating as you perform the music, as you do the theater, as you recite the poems. So anything goes, and that’s what cabaret offers us.”

For a complete calendar of performances and events during the Chicago Paris Cabaret Connexion, visit their website.

In Their Own Words: Quotes From Artists and Friends of WFMT Who Died in 2020
In the Age of the Visual Album, What Can Opera Learn from Beyoncé?
A Toast To the City of Classical Music: Living a Musical Life in Vienna
Jennifer Koh and Reiko Uchida [Rebroadcast]
Hope and Strength: Celebrating Black Artistry with Lawrence Brownlee & Lyric
Celebrate Art Song and Living Composers in Chicago and Beyond at this Three-Day Festival