Music Director Yannick Nézet-Séguin will lead the tour in May to Beijing, Tianjin, Hangzhou, Nanjing and Shanghai, with Shanghai-born pianist Haochen Zhang as soloist.

The orchestra says that during a time of uncertainty in the countries’ relations, they hope to serve as a “cultural bridge.”

The tour will launch with a weeklong residency in Beijing that includes two concerts, panel discussions, a chamber performance with musicians of the National Centre for the Performing Arts Orchestra, and performances during the China International Music Competition.

It marks the orchestra’s 12th tour of China.

Under legendary conductor Eugene Ormandy, it was the first U.S. orchestra to visit China in 1973 as part of a historic thaw in relations between the two countries.

Trio Celeste [Rebroadcast]
A Toast To the City of Classical Music: Living a Musical Life in Vienna
Born to Conduct: Film charts Met music director's ascent
In Their Own Words: Quotes From Artists and Friends of WFMT Who Died in 2020
Jory Vinikour with Special Guest Rachel Barton Pine [Rebroadcast]
In the Age of the Visual Album, What Can Opera Learn from Beyoncé? 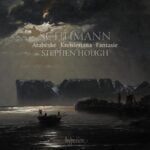