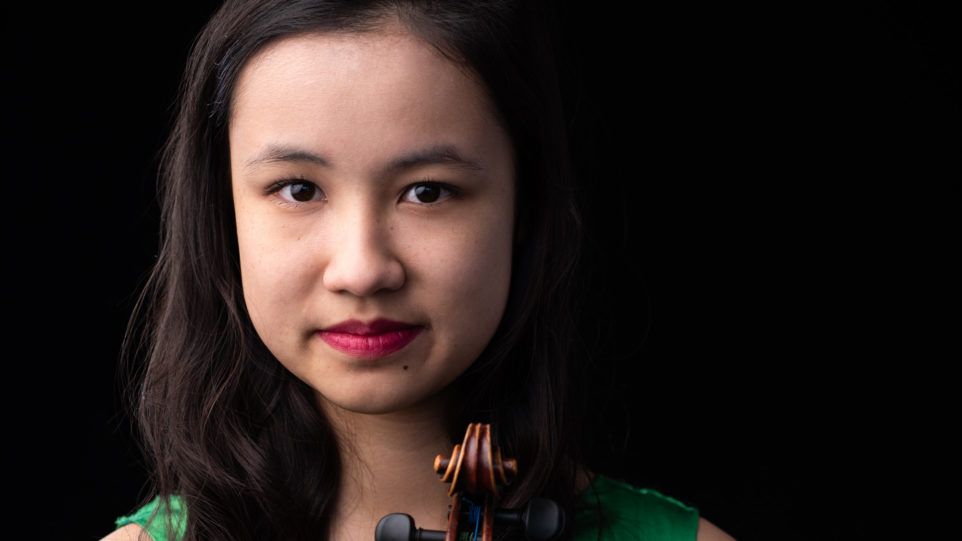 Claire Arias-Kim, 17, studies violin with Almita Vamos and is a Merit Scholarship Fellow at the Music Institute of Chicago’s Academy, a training center for advanced pre-college musicians. Claire began her violin studies with Betty Haag at age 3.

Last year, Claire performed Lalo’s Symphony Espagnole with the Lakeview Orchestra after winning first place in their concerto competition. For two consecutive summers Claire was also one of 12 violinists selected to be part of the Brian Lewis Young Artists Program, where she had the opportunity to perform the Mendelssohn and Saint Saens violin concertos with the Ottawa Chamber Orchestra.

For three consecutive years, Claire was selected to participate with her chamber ensemble in the quarterfinals of the Fischoff Chamber Music Competition where most recently she advanced to the semi-finals as a member of Trio Sarrasin. In 2017 she was selected to perform a recital at the Young Steinway Concert Series. Claire is also a National YoungArts Foundation Winner for 2017 and 2018.

In the winter of 2017, Claire premiered Fantasy for Violin, Strings and Piano by Gong Qian Yang and performed the Butterfly Lovers’ Violin Concerto by He Zhanhao and Chen Gang with the Lincolnwood Chamber Orchestra at the International Cultural Exchange Festival presented by the Chicago Chopin Society and American Music Festivals. Recently she soloed with the Academy Chamber Orchestra at the Music Institute of Chicago’s Academy. This year she was selected (for a second consecutive year) as a semi-finalist for the 22nd Annual Sphinx Competition. Most recently, Claire soloed with the Oistrakh Symphony of Chicago after being selected as a winner of the DePaul Concerto Festival.

Claire has had violin masterclasses with Ilya Kaler, Vadim Gluzman, Ida Kavafian, Ani Kavafian, Kristof Barati, Yair Kless, Gerardo Ribeiro, Peter Herresthal, Rachel Barton-Pine, and Olga Kaler. She has also had piano masterclasses with Dr. Brian Lee and Angela Yoffee. During the summer of 2017 she was a participant at the Bowdoin International Music Festival, and this past summer she attended the Aspen Music Festival under a merit scholarship studying with Robert Lipsett. This summer she will be studying with Mr. Lipsett under a full scholarship at the Aspen Music Festival. This spring Claire soloed with the Elgin Symphony Orchestra on their education concert series, as well as with the LaCrosse Symphony Orchestra as a result of being selected as a finalist for the Rising Stars Competition. Later this spring she will solo with the Rockford Symphony Youth Orchestra as a result of winning first place in the Rockford Symphony Orchestra Concerto Competition.