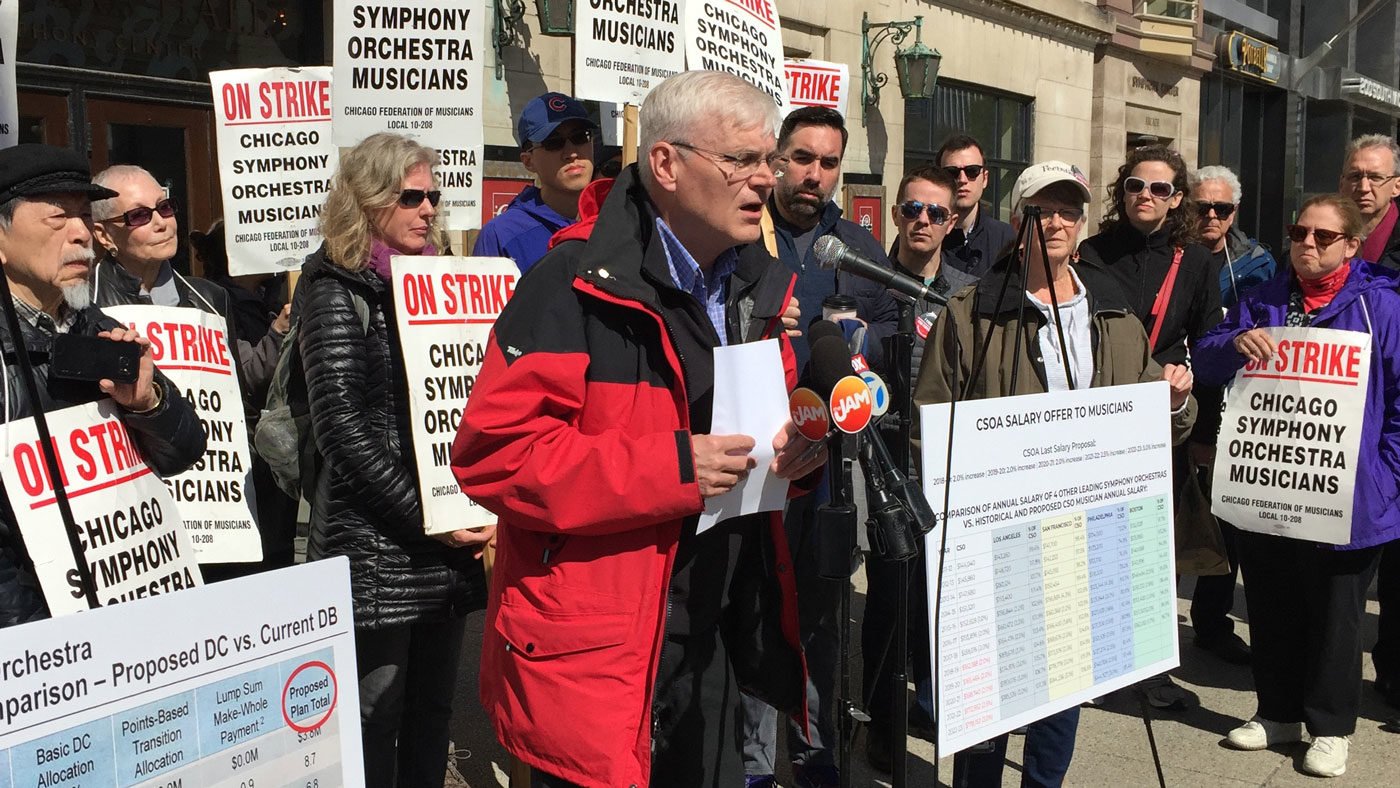 The musicians of the Chicago Symphony Orchestra publicly called for management to return to the table to resolve the labor dispute now in its seventh week, the longest in the orchestra’s history.

“We’re calling on the association to resume negotiations immediately,” said Steve Lester, a CSO bassist and the chair of the negotiating committee for the musicians’ union. “The damage that is being done to this institution is almost irreparable. It is time to move.”

Flanked by two charts, one each about the central issues of retirement plans and wages, Lester spelled out the union’s concerns with the most recent proposal from the Chicago Symphony Orchestra Association, the orchestra’s management.

One chart showed the CSO’s base wage failing to keep pace with those of the orchestras of Los Angeles, San Francisco, Philadelphia and Boston. The association has offered increases of 2 to 3 percent over each year of a five-year contract, which would cause the lower salaries of Philadelphia and Boston to move about 1 percent closer to the CSO’s, and the higher salaries of the California orchestras to pull about 4 percent farther away.

The association responds by pointing to the higher cost of living in those cities, especially the cost of housing in San Francisco and Los Angeles.

The other chart, one produced by the association, showed the costs of the current retirement plan and the association’s proposed plan over a ten-year horizon. The current defined-benefit plan, a classic pension, is estimated to cost $36.5 million over that period. The association hopes to transition the musicians to a defined-contribution plan similar to a 401(k), and the ten-year cost of introducing the new plan and phasing out the old plan is estimated at $47.5 million.

The musicians’ union offers a compromise on retirement, Lester said, where the defined-contribution plan would begin, and the defined-benefit plan would also continue, but with no increases for the next 20 years. Because poor investment returns would burden the association under a defined-benefit plan and the individual musicians under a defined-contribution plan, the blend of the two plans splits the difference.

“We can understand that risk maybe should be shared, and not just put all on the association’s shoulders or all on the shoulders of the musicians,” he said.

Shortly after this morning’s press event, the association issued a statement asserting its willingness to resume negotiations and chiding the union for not instigating the scheduling process itself.

“There is an agreed-upon scheduling process through either the federal mediator or the attorneys directly and the Association has not been contacted since our last negotiating session on April 16,” the statement read.

Because of the strike, all Symphony Center events through April 30 have been canceled, as well as the May 3 concert with Chick Corea and Bela Fleck. CSO music director Riccardo Muti is scheduled to conduct two weeks of subscription concerts beginning on May 2.

“[Muti] has assured me he will be coming to Chicago,” Lester said.