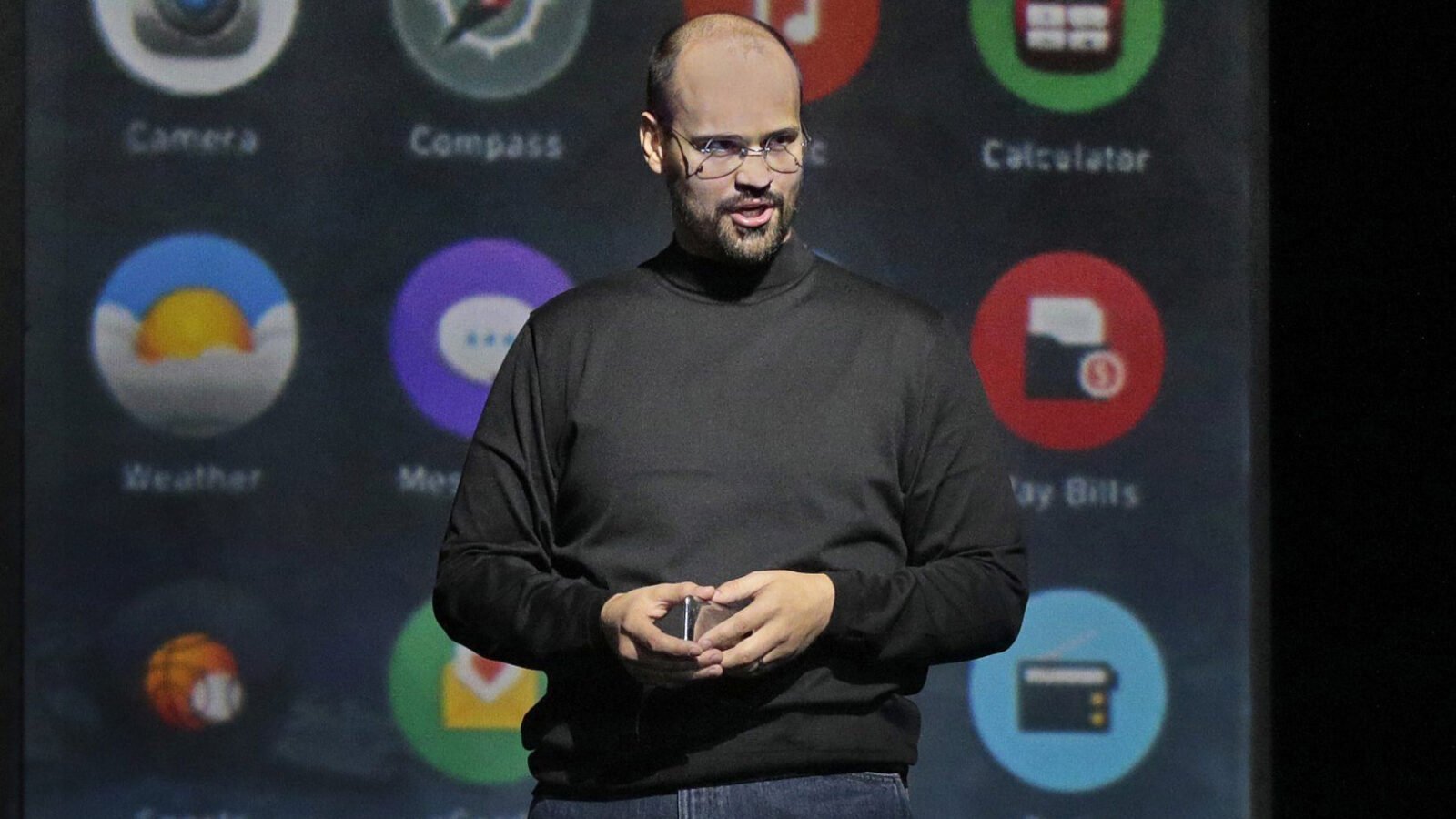 What makes for a great opera character? Is it the braggadocious Figaro, with his sarcastic patter in The Barber of Seville; the tragic swooning and lust for life of Mimì in La bohème; or the forlorn poet of Tales of Hoffmann, who is always on the search for his next love and heartbreak?

When American composer Mason Bates, who is known for his inventive fusion of electronic and symphonic sounds, began to write the opera The (R)evolution of Steve Jobs, he was surprised by just how operatic his subject was. “I was not really aware of how provocative a subject [Jobs] would be. I just read about him, and I thought this was the stuff of opera. His life has passion, obsession, and betrayal, and ultimately, death. The death of Steve Jobs probably had something to do with the fact that he was trying to control his own cancer treatments through homeopathic diets. That’s an Achilles flaw. The same guy, that’s a control freak about not letting his software get into anybody else’s hardware, did the same thing with his own body… That’s operatic.”

Along with Mason Bates, WFMT spoke with the opera’s librettist Mark Campbell as well as baritone Edward Parks, who created the role of Jobs. WFMT broadcasts the Grammy-winning world premiere live recording of The (R)evolution of Steve Jobs from The Santa Fe Opera on Saturday, June 18 at noon CT. Tune in at 98.7FM, WFMT.com, or the WFMT app.

The opera follows the visionary Apple co-founder as he looks back on his life and career. Bates describes the opera as taking place “at a moment in Jobs’ life when he must face his own mortality and circles back to the events and people in his past that shaped and inspired him: his father Paul, Zen Buddhism, his relationship with a woman whose child he initially disowned, his quick rise and fall as a mogul, and – most importantly – his wife Laurene, who showed him the power of love and connection.”

WFMT: What are the challenges bringing a real-life character like Steve Jobs to the opera stage? 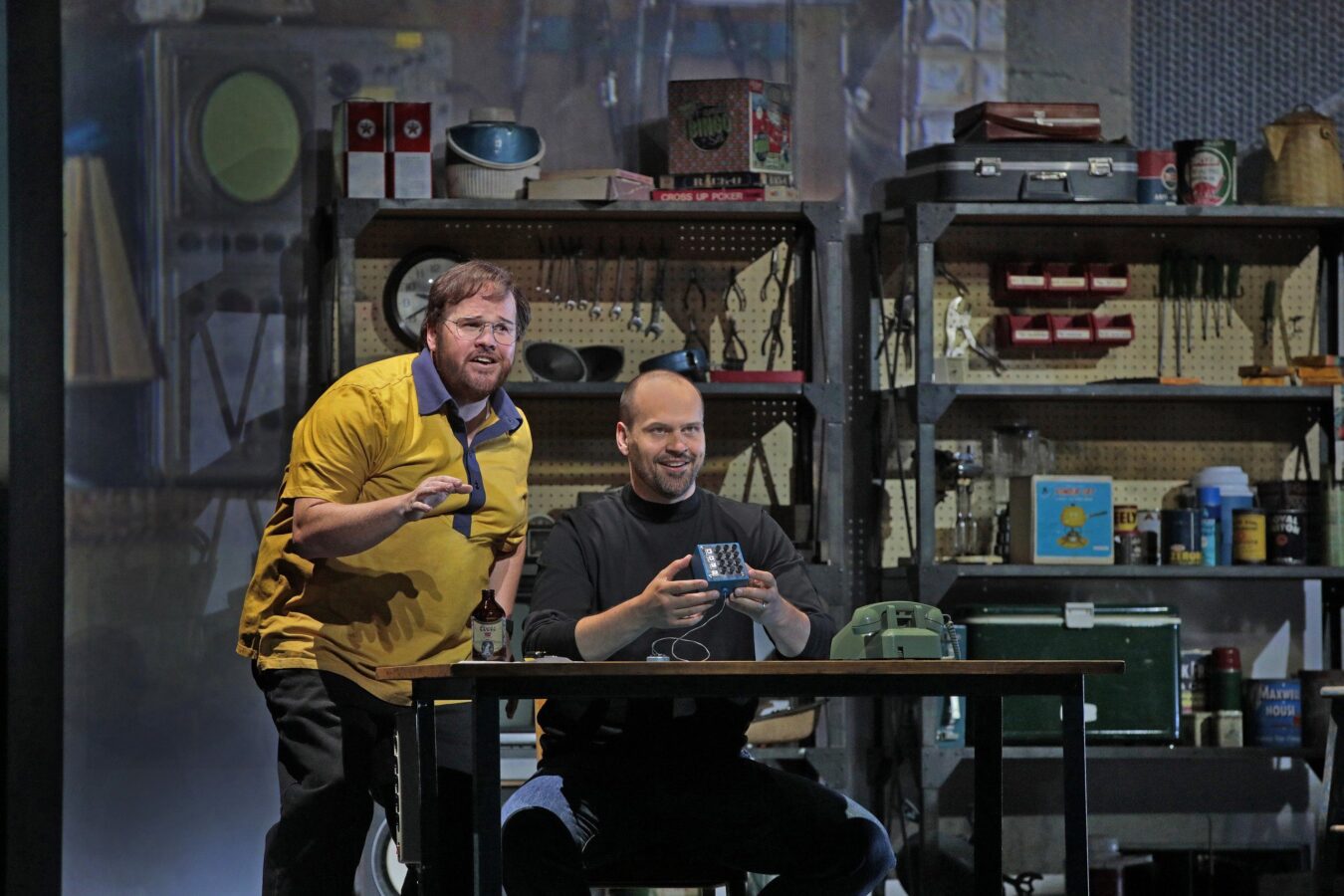 Mark Campbell: When Mason Bates first asked me to write and opera about Steve Jobs, I told him I wasn’t sure I could do it. We know Jobs. He’s in our living rooms, in our bedrooms, in our kitchens, probably. It felt like sort of an impossible task to create a character from a real person that everyone knows so well.

I love the energy, drive, and propulsion in Mason’s music, so I did my research and found that there was a version of Steve Jobs that both Mason and I could agree on, and that we would grow an opera around. This is not a hagiography, as I think it paints both the negative and positive sides of Steve Jobs.

Mason Bates: So many people came up to me and said, “Wow, what’s up with this opera about Steve Jobs?” People were surprised to see him as an opera character.

Composer John Adams really summed it up for me. He said, “People said the same thing to me about Richard Nixon. When I wrote Nixon in China, people said, who would have ever thought of an opera about Nixon?” Adams said, “You found a subject that is so surprising to people that it draws them in. The trick is you have to deliver on that in the opera house.”

Edward Parks: It was a little daunting in the beginning, when I took on the role. At first, I decided I needed to put away all the things that we all think we know about him. I think Steve Jobs was very smart in the way he presented himself to the public. I think he had this image of who everybody thought he was. And I wanted to step back and take stock of the man he was behind the door, with his family, because a lot of the moments in the show are very personal. I wanted to play them as a normal person, kind of bring it down to the basics.

WFMT: How did you bring the sounds and technology of 21st century music into the opera house? 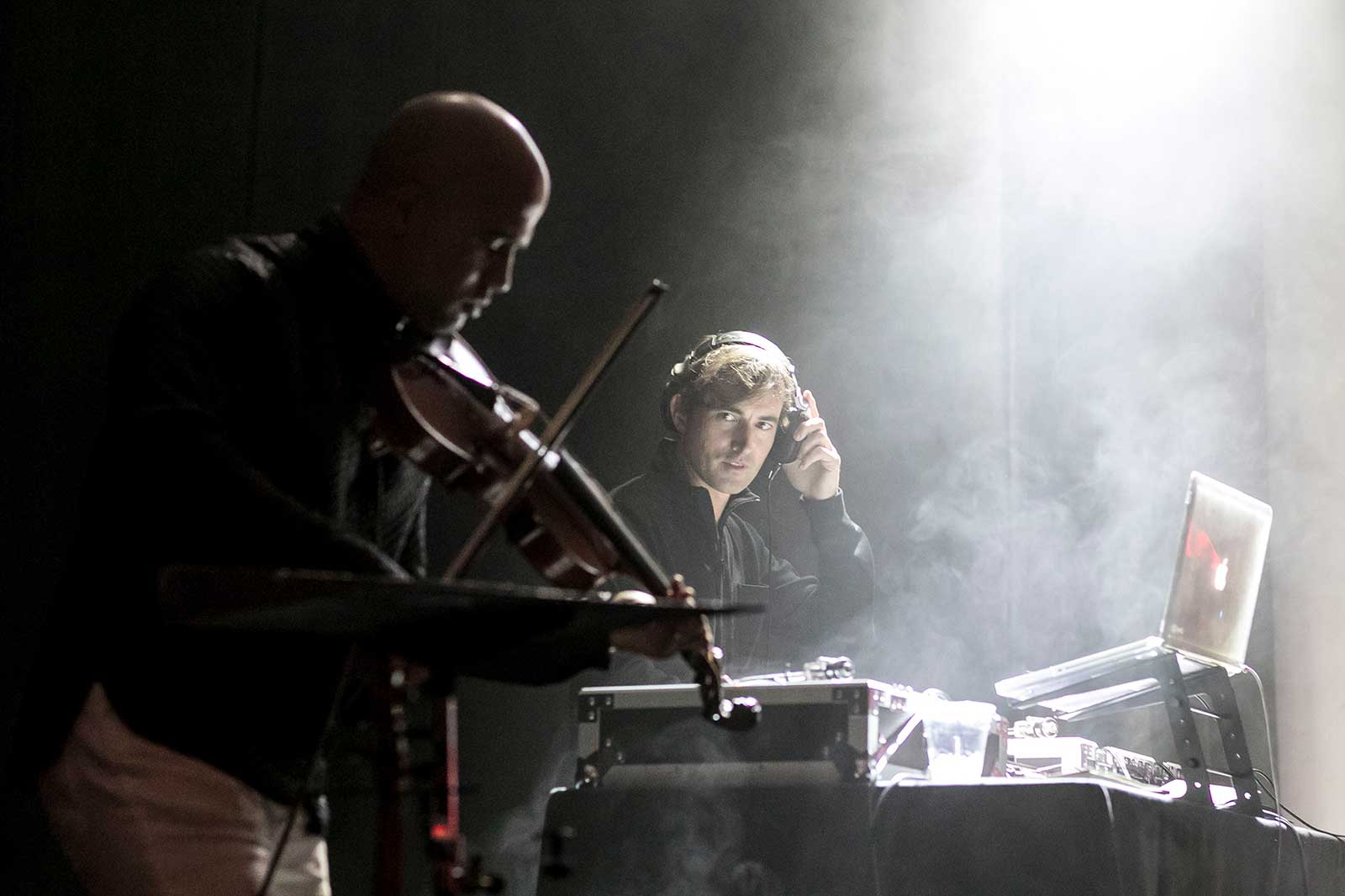 Bates: I think the element of digital sounds is ripe for inclusion in the opera world. Opera has always been about technology, stagecraft, and pyrotechnics. Let’s add Wagnerian tubas, or let’s add a thunder sheet. There are things you add to the world of opera to expand your storytelling. So, when I was thinking about Steve Jobs as a subject, it naturally patched into my desire to have the sounds of the digital age, working with a centuries-old media.

The opening sounds you hear in the piece are samples of old Macintosh gear, and that’s kind of a neat metafictional element. The person you’re about to explore is so impactful that just hearing those clicks of the devices he created is enough to cause us to consider his impact.

Parks: I think it’s so refreshing. I do a lot of contemporary opera and the music is so approachable. The way Mason mixes in all the electronics with the orchestra. It’s kind of hard to know where it starts and stops, and I think it’s fascinating.

As a performer, it was unlike any experience I have ever had. It’s a great piece, especially for people who are new to opera. I think it shows what opera is capable of and what it’s trying to grow to.

WFMT: How does the opera’s nonlinear storytelling fit in with the arc of Steve Jobs’ life?

Campbell: As I read about Steve Jobs, I learned that he was a Soto Zen Buddhist for most of his adult life. I think starting when he was 18 or 19. I came across a symbol called the ensō, which is a circular illustration painted by Buddhist monks every day, either in one stroke or in two strokes. The idea is to celebrate the fact that we can never draw a perfect circle, that that is the beauty of human life. We can aim for perfection, but we never achieve it.

As I was working on the narrative, I thought it would be great to do something like that, create a circle in the narrative. I think when we look back on the events of our life, we don’t do it in a chronological fashion. One memory leads to another in a beautiful, poetic way.

Bates: Mark was able to take an iconic figure that everybody has a kind of relationship with and present his life in this nonlinear format. That allowed for the kind of juxtapositions that a conventional storyline wouldn’t be able to take advantage of. He also brought out some characters in Steve Jobs’ life that were essential to what Jobs was able to accomplish. 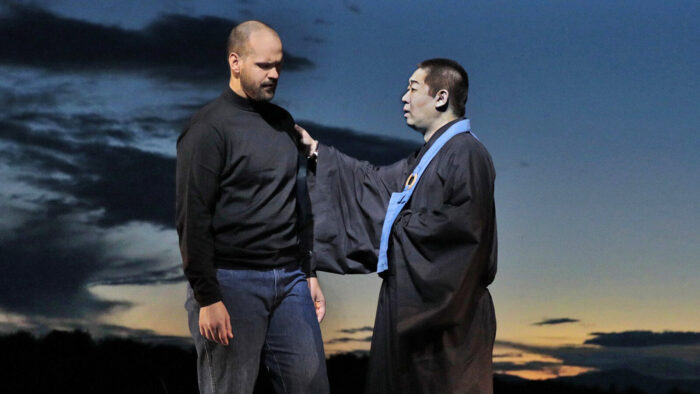 For example, Laurene Powell Jobs has a huge role in the opera, especially towards the end. If it starts all about technology and products, by the end of the opera, it’s about death and treating people like humans. Laurene is the one to deliver those lines. Also, Kōbun, Steve’s Buddhist mentor, is a very special part of this piece. Somebody who has not been part of any narrative of Steve Jobs, thus far.

WFMT: What are the different sound worlds of the characters in the opera?

Bates: One big thing I wanted to do in the opera was to explore the music of communication. The subject of the opera is a man who changed the way we communicate with these devices, and therefore we could really dramatize how people communicate through an expanded use of leitmotif. This leitmotif, in Wagnerian settings, is a theme that represents a certain character or idea. I wanted to explode the idea of leitmotif into a sound world that would come with everything from atmospheric elements to even electronic elements. Kōbun, Steve’s spiritual advisor, has this sound world of processed prayer bowls and almost like kind of bamboo chimes. That’s immediately recognizable as a kind of leitmotif, it just works differently than Wagner’s does.

Having different characters with different sound worlds becomes interesting when they start to merge. Laurene Powell Jobs has this kind of, oceanic, earthy, string harmonies because she’s a very soulful person. By the end of the opera, she consumes the busy inner-workings of Steve Jobs’ electronica sound world. That’s a way of showing that Laurene was impressing upon him the importance of being human and treating people like they don’t have one button.

Campbell: Mason’s music is astonishing. The product launch at the beginning of the opera has such incredible energy. But then he also brings in the conflicts of this character. When we see Steve with Kōbun looking at a sunset, and they comment on it, it’s just three lines, but the way Mason is able to capture the beauty and fear of death in those lines is extraordinary. I love the way he captures the dorkiness of Steve Woz and Steve Jobs, a couple of stoner kids in a garage in California, not realizing they are going to change the future.

I especially like how he handled the last moments of the opera with Laurene Powell Jobs. She sees the legacy of Steve, and we have all these devices now that are supposed to make our lives better, but they seem to complicate things. She says, “Look up, look out. Be here now.” This line comes from a book by Ram Dass, which Steve read religiously in the ’70s. I used that as a lyric because I think it’s a sentiment Steve Jobs may have wanted us to feel before he died, and Mason is able to capture that so well with his music.

Hear The (R)evolution of Steve Jobs from The Santa Fe Opera at noon on Saturday, June 18. Listen on 98.7 FM in the Chicago area, or tune in on wfmt.com or the WFMT app. This interview has been lightly edited for length and clarity.

In the Age of the Visual Album, What Can Opera Learn from Beyoncé?
Mason Bates Takes Us Inside the Orchestra, Literally, In New Concerto, Film ‘Philharmonia Fantastique’
Verismo Meets Lyrical Flow: Chicago Composer Creates Opera from Classic Nas Track
In Their Own Words: Inspiring Quotes From Classical Artists and Friends Who Died in 2022
Lyric Returns With Free Star-Studded Virtual Gala
Enrique Mazzola on Returning to the Stage, Taking the Reins at Lyric