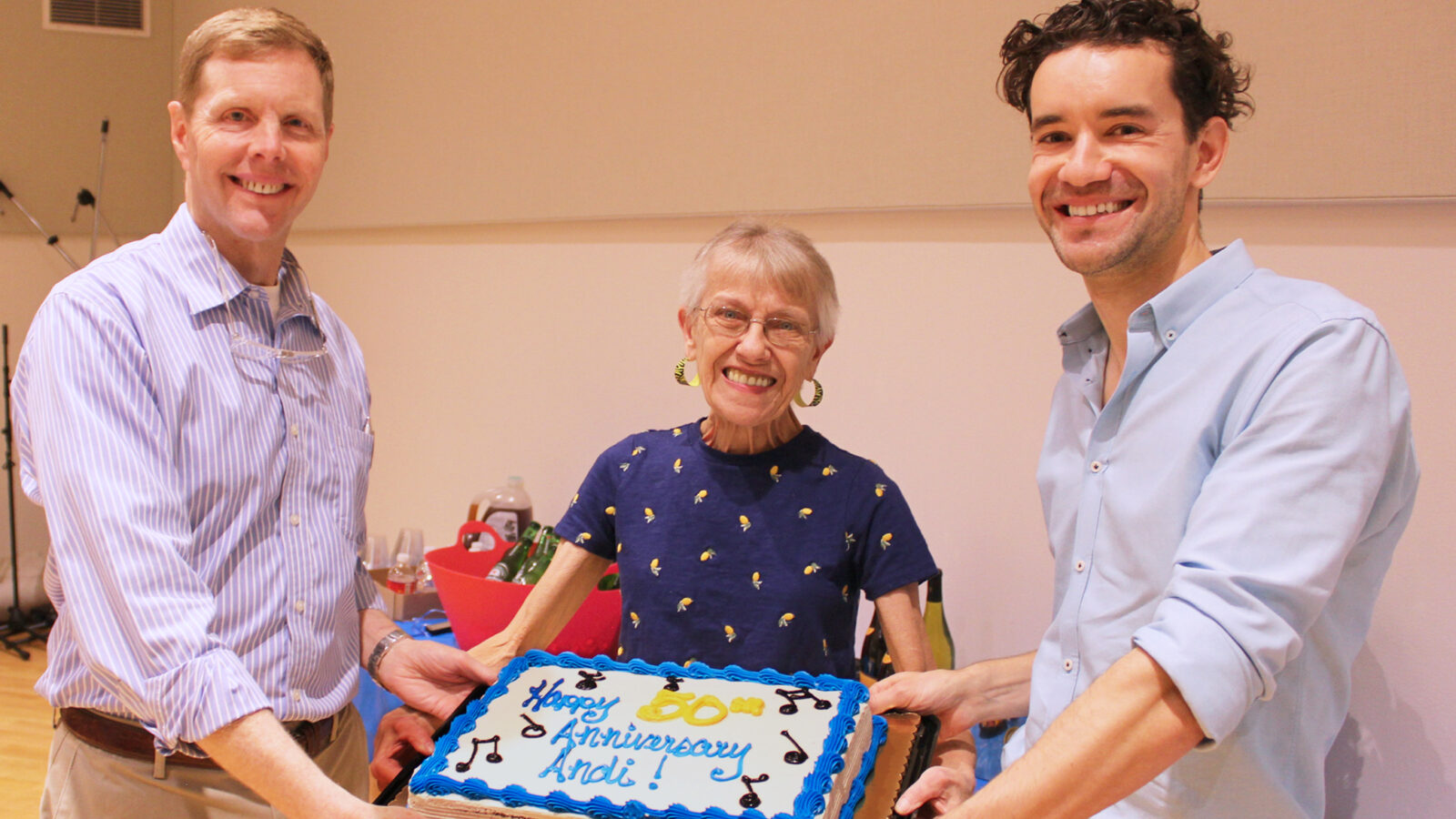 This month, Music Director Andi Lamoreaux passed a remarkable milestone — 50 years with WFMT. Since her arrival as a station librarian in 1969, Andi has been a vital presence at the station and has witnessed key moments in WFMT’s history — the visit of Dmitri Shostakovich in 1973, the first live Lyric Opera of Chicago radio broadcast, and two station moves. Andi quips, “I am not moving that library again, that is for sure, but I think we have found a home here.” Andi spoke about her professional home and the fifty years she’s spent here at WFMT.

I was at the Northwestern University Music School finishing up my Master’s degree. In those days, you didn’t go online to look for jobs — you went to the placement office, and they had a bulletin board with 3×5 cards tacked up. The real Dark Ages. One day, there was a card that said, “WFMT needs a librarian.” The card said, “Call Ms. Baum.” That was Lois Baum, my longtime friend and colleague.

I came down from Evanston to Chicago to be interviewed, and we got along really well, right from the start. When I was leaving, she said, “If we hire you, would you promise to stay with us for a year?” I said I thought I could do that. So here it is, half a century later, and I am still here.

I started doing more and more to help [program director] Norman Pellegrini with the programming. I would write for the program guide, and I would proofread the listings. As the years went by, he would trust me more and more to actually put together programs, to actually edit concert recordings. I learned how to edit by using a razor blade on analog tape. I don’t know if anybody here would remember that process now.

I would also put together some of the listings. As the network expanded, I started writing some scripts for the broadcasts. Kerry Frumkin and I worked together for quite some time on “The New York Philharmonic This Week” programs. We enjoyed doing that.

I became Music Director in 2001, and that is the title I’ve held ever since.

In a lot of ways, WFMT has changed, but in a lot of ways, it has remained the same. We’re still playing the same music, it’s all great music. I like to think that nowadays we have a little bit more variety, but the core of classical music is probably going to stay the same. And we’re still trying to share that with our listeners. That certainly has not changed. There is also — and this I value very much — there is also a feeling among the staff of a kind of family connection, and even with all the personnel changes that I have seen over fifty years, that attitude and that feeling have not changed! It’s very much the same as it was. The general air of good cheer and total professionalism, that hasn’t changed.

I want WFMT to be a welcoming station, I want to be a friendly spot on the dial. We’re glad you’re listening.

A Toast To the City of Classical Music: Living a Musical Life in Vienna
Lyric Announces 2021-22 Season With 'Magic Flute,' 'Macbeth,' Mazzola
In the Age of the Visual Album, What Can Opera Learn from Beyoncé?
Lyric Returns With Free Star-Studded Virtual Gala
Decade in Review: The 2010s and Classical Music
9 Works by Women Writers We Want to See Adapted into Operas