WFMT now gives you a daily connection to the amazing wealth and variety of classical music in the Chicago region. Music in Chicago is heard weekdays at noon, featuring recordings and live performances by area soloists and ensembles and visiting artists. This Monday, we’re sharing music from the Escher Quartet. On Tuesday, we’ll hear a WFMT Impromptu by guitarist Pablo Sáinz Villegas. On Wednesday, we’ll take you downtown for a live Dame Myra Hess Memorial Concert by cellist Gabriel Martins and pianist Joseph Liccardo. On Thursday, we’ll hear highlights from a recent concert at St. John Cantius Church, and Friday, the Spektral Quartet is featured in a performance from the Rush Hour Concert Series.

The Escher String Quartet has received acclaim for its expressive, nuanced performances that combine unusual textural clarity with a rich, blended sound. A former BBC New Generation Artist, the quartet has performed at the BBC Proms at Cadogan Hall and is a regular guest at Wigmore Hall. In its home town of New York, the ensemble serves as Season Artists of The Chamber Music Society of Lincoln Center. Before their June performance at the 2019 North Shore Chamber Music Festival in Northbrook, the Escher String Quartet played for WFMT on Facebook Live. 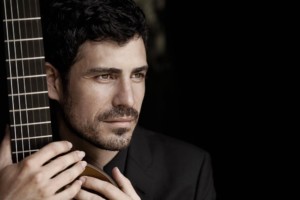 Praised as “the soul of the Spanish guitar”, Pablo Sáinz Villegas has become a worldwide sensation known as this generation’s great guitarist. With his “virtuosic playing characterized by irresistible exuberance” as described by The New York Times, his interpretations conjure the passion, playfulness, and drama of Rioja, his homeland’s rich musical heritage. Sáinz Villegas visited WFMT for a live Impromptu on May 20, 2019.

American cellist Gabriel Martins is a prize-winner of the David Popper International Cello Competition, Orford Music Award, Prague Spring International Music Competition, Sphinx Competition, and International Tchaikovsky Competition for Young Musicians. According to esteemed cellist Ralph Kirshbaum, he has “revealed heart, passion, intellect, and a finely-nuanced palette of colors in a compelling manner worthy of a seasoned artist.” Martins will be joined by pianist Joseph Liccardo for a live broadcast from the Dame Myra Hess Memorial Concert Series at the Chicago Cultural Center.

On June 8th, 2019, the Consulate General of France in Chicago, in collaboration with St. John Cantius Church, hosted a musical moment of reflection for Notre Dame Cathedral in Paris. The program featured a combined choir of over 100 voices and talented organists and conductors from all over the Chicago area. The repertoire included French works composed for Notre Dame.

Finale from Organ Symphony No. 1 by Louis Vierne The twice-Grammy nominated Spektral Quartet actively pursues a vivid conversation between exhilarating works of the traditional repertoire and those written this decade, this year, or this week. Since its inception in 2010, Spektral is known for creating seamless connections across centuries. At St. James Cathedral’s Rush Hour Concert Series on July 9, 2019, the Quartet paired music by Kotoka Suzuki and Franz Schubert.