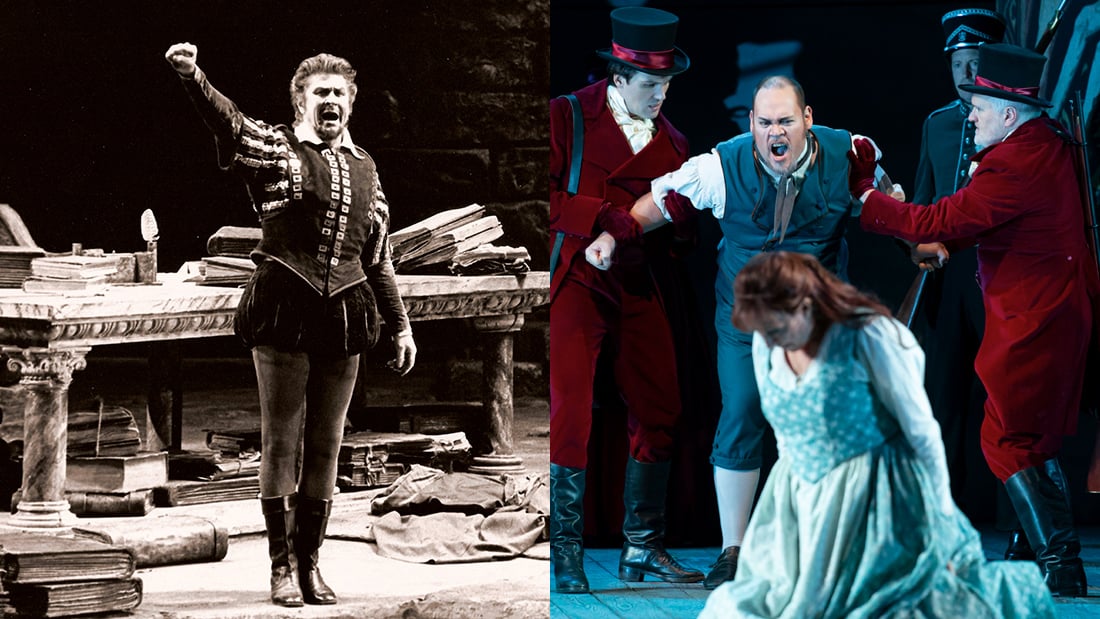 There are baritones, and then there are Verdi baritones. They are the elite performers, athletes among baritones, thrilling their fans with blazing top notes and plumbing the depths of some of the most dramatically complex roles in opera, such as the title role in Giuseppe Verdi's Rigoletto, Iago in Otello, and Amonasro in Aida.

To better understand, WFMT spoke with two leading Verdi baritones of the past 50 years, Sherrill Milnes and Quinn Kelsey. Milnes sang over 650 performances at the Met, where he was honored with sixteen new productions, seven opening nights, and ten national telecasts. He is the winner of three Grammy Awards, and the most recorded American singer of his time. Quinn Kelsey, a Ryan Opera Center alumnus, has emerged as a leading Verdi Baritone on international stages, including the Metropolitan Opera, Royal Opera House, Covent Garden, San Francisco Opera, and of course, Lyric Opera of Chicago. Sherrill Milnes’ performance as Miller in Verdi’s Luisa Miller at the Metropolitan Opera in 1968 catapulted him to international fame. Quinn Kelsey’s regal voice can be heard in Lyric Opera of Chicago’s current production of Luisa Miller.

WFMT: How is being a Verdi baritone different from singing some of the bel canto parts?
Quinn Kelsey: This is definitely a question for the ages for this voice type. When you're coming up as a young singer you know it's not a bass, not a tenor. What makes the Verdi baritone? What is it about it that sets it apart? Making the comparison between the Verdi baritone and bel canto or, or Mozart type baritones, I would say there are qualities like the color. Some say that there's a there's a nobility in the color, that it's a much broader color, hefty. Sometimes it's the weight of the voice that you need.

Sherrill Milnes: I don’t think there is a one and only Verdi baritone sound. If you think of Lawrence Tibbett, Leonard Warren, Robert Merrill, Cornell MacNeil, me, whatever, all different sounds. You can tell them right off. You have to be able to live up in a high register and sing a little louder. As we know, Verdi treated the baritone voice a little differently than his bel canto predecessors. He wrote heavier orchestration and tended to use more brass, ergo louder. So, you have to live a little higher and have more stamina to keep pouring out sound in the E, F, G, occasionally A-flat range.

But in terms of timbre, of color of sound I don’t think there is an exact sound. Some of this has to do with audience perception and fame, and fame means you have to be good, but being good in and of itself does not create fame.

WFMT: Well, there's a heavier orchestration in Verdi works than in previous operas.
Kelsey: Right. So then, in that case that you know you've got to be able to survive over that larger orchestra. And so the voice has to have more of a structure, than the bel canto or the Mozart to be able to cut through that orchestra.

WFMT: And at least it's become typical for Verdi baritones to sing a lot of high notes for baritone. It's almost a tenor range.
Kelsey: Almost. That's true. In in preparing for Luisa Miller, I did find that the tessitura for Miller was a little bit higher, that it just it just sat up in that higher range a lot more than Traviata, than Aida. Verdi just kind of parks him up there, right in the middle of the passaggio. And you're just going oh, man, come on! But it really makes the character. It really fills that that space in the opera.

WFMT: Sherill, you carved a path for Verdi baritones — when your first opera recital LP came out, “The Baritone Voice,” you set a new standard for interpolating higher notes in some of this repertoire.
Milnes: Well, I did what I could, as I told Tom Hampson and Dmitri Hvorostovsky, I made it as hard on my successors as I could.

So what defines a Verdi baritone? It’s a combination of a big, rich-sounding voice, ringing high notes, the stamina to sing long roles that sit in a high range, and, ideally, the acting ability to make the most of some very complex characters. A healthy dose of charisma doesn’t hurt, either!

Want some examples of Verdi baritones? Check out our playlist below: