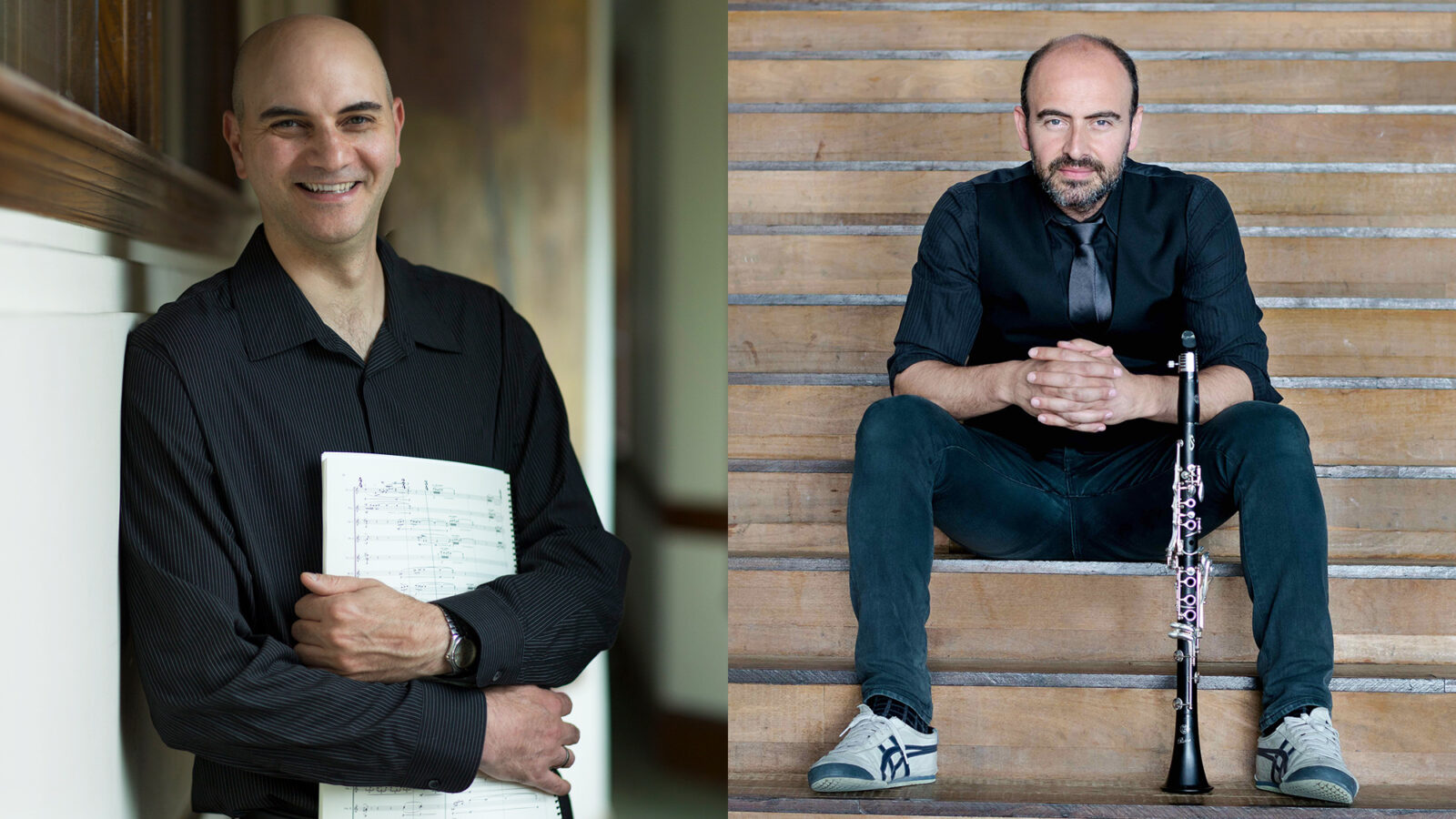 “I think art is about urgency,” declares clarinetist Kinan Azmeh. Born in Damascus, Syria, Azmeh’s home country has undergone years of political strife, violence, and a refugee crisis. Azmeh has looked to his own craft in order to draw attention to these ongoing struggles in the form of a concerto by Syrian composer Kareem Roustom.

Azmeh met composer Roustom in 2006 while on tour with the West-Eastern Divan Orchestra in the United States, and the two became immediate friends. Roustom, who is also from Damascus, subsequently composed a few chamber works for Azmeh. The two had also discussed the idea of a clarinet concerto.

At the height of the Syrian refugee crisis, Roustom decided to write the piece. “It’s easy to be so overwhelmed with the many problems and division we have these days,” the composer says. “If you look within your community, that’s the first place where we can create positive change.”

Titled Adrift on the Wine-Dark Sea, the concerto is densely orchestrated, with the solo clarinet often pitted against the tidal wave forces of an orchestra. Roustom decided to connect mythology to the present day in order to not only create a powerful sound world but also to tell a parallel narrative about survival.

“I had this old copy of The Odyssey lying around,” Roustom recalls, “and I just wanted to reread it because I love it so much. Shortly after that, I read a book by Melissa Fleming called A Hope More Powerful Than the Sea, which tells the story about a Syrian refugee across the Mediterranean, very similar to Odysseus trying to get back to Ithaca. The two felt like they were the same story – just someone trying to get home but with a massive obstacle in front of them.”

“Did the soloist survive at the end or did he not?” asks Azmeh, who notes the work’s ambiguous conclusion. “Did he go to the underworld or did he survive and live a prosperous life elsewhere? For me, I choose my own narrative: this person survived and made it.”

Azmeh first recorded Roustom’s concerto with the Deutsches Symphony Orchestra in Berlin. On Friday, October 25, the clarinetist will give the North American premiere of the piece with the Discover Symphony, presented by the Park Ridge Civic Orchestra, at Northeastern Illinois University’s Auditorium Hall.

Azmeh and Roustom are eager to share this work with Chicago area listeners. “The Park Ridge connection came through Jackson Hole, Wyoming,” says Roustom. “I was composer-in-residence at the Grant Teton Music Festival, and I met Vic Muenzer, who is the conductor of the Park Ridge Civic Orchestra. We struck up a friendship, and he heard this piece and felt like he really wanted to do it. I said, ‘Vic, if you want to give the North American premiere, I’d be thrilled.’”

Both artists believe that the concerto can “bring attention to why there is a refugee crisis in the first place,” as Azmeh says. “People now discuss the refugee crisis as an independent event, that suddenly people decided to pack up and go. What kind of brutality forced people to leave? How can we address that brutality? I think that’s where art is important. We’re able to express things and feel things that we don’t have in real life.”

He continues, “It’s the same as when I play the Mozart concerto: I want people to be moved. It’s about an emotional investment that you do when you go to a concert or use a CD or LP or whatever format – why do you [seek out music]? I think because you are reaching for the most fundamental and most important aspect of human civilization, which is, in my opinion, the arts. That’s what at least keeps me alive. I want audiences in Chicago and around the world to have that.”

Kinan Azmeh and the Discover Symphony, presented by the Park Ridge Civic Orchestra, will perform the North American premiere of Kareem Roustom’s Clarinet Concerto: Adrift on the Wine-Dark Sea on Friday, October 25 at Northeastern Illinois University’s Auditorium Hall at 7:30 pm. For ticketing and information, visit parkridgecivicorchestra.org/discover-symphony.

The concerto will also be presented at Maine East High School in Park Ridge on Sunday, October 27 at 3:00 pm. For ticketing and information, visit parkridgecivicorchestra.org/planet-earth.