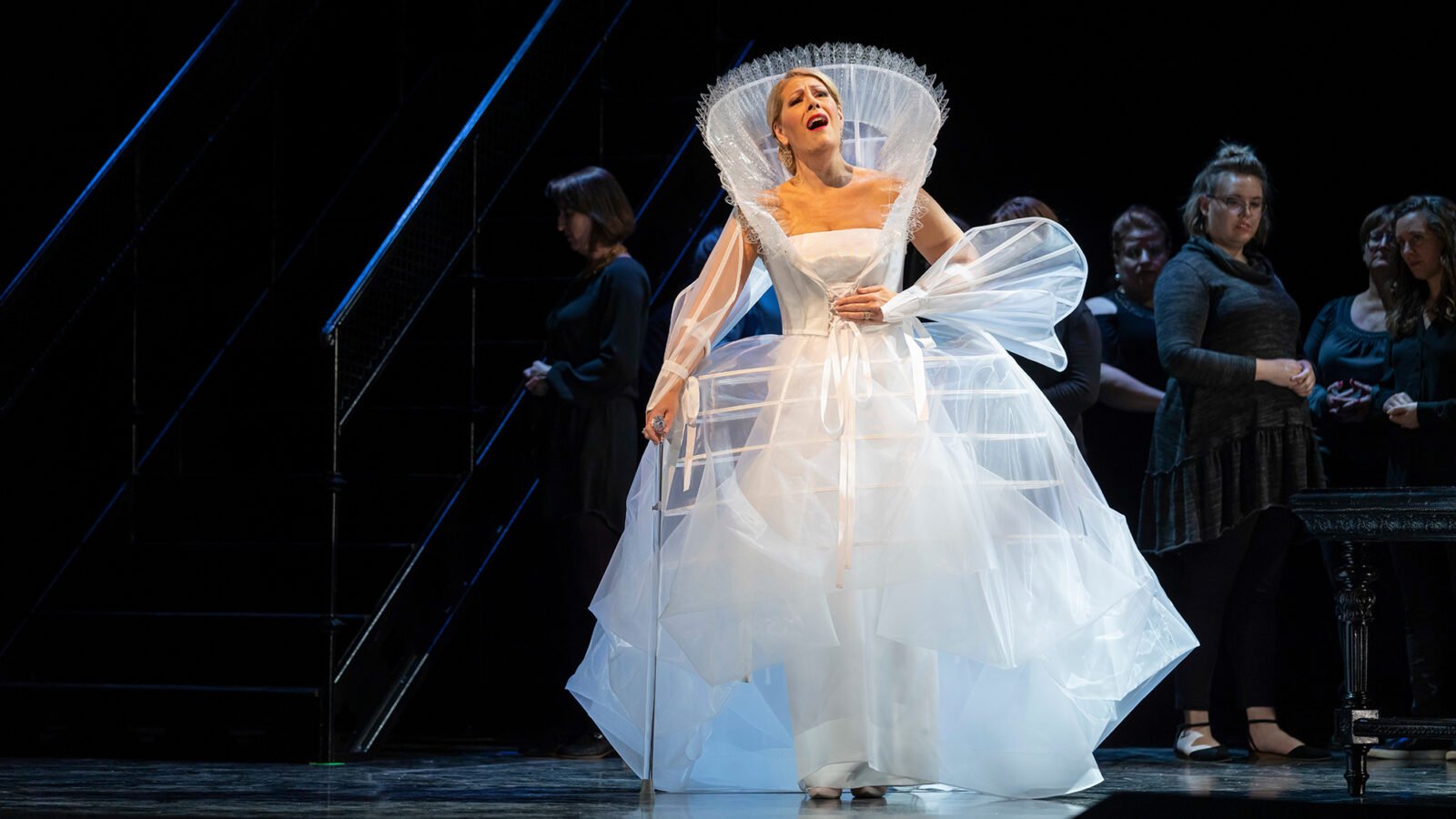 Sondra Radvanovsky in rehearsal as Queen Elizabeth I in The Three Queens (Photo: Todd Rosenberg)

Soprano Sondra Radvanovsky’s renowned vocal prowess is on impressive display at Lyric Opera of Chicago in The Three Queens, a semi-staged presentation of the finales of three great operas by Gaetano Donizetti, Anna Bolena, Maria Stuarda, and Roberto Devereux, that dramatize the stories of three legendary figures in British royal history, Anne Boleyn, Mary Stuart, and Queen Elizabeth I.

We spoke with Sondra Radvanovsky and asked her to put these women, and these gowns, into context.

WFMT: Tell us about these three women. Who were they, and how were they portrayed in the three Donizetti works?

Sondra Radvanovsky: Historically, they were all related to each other. Anne Boleyn was the second wife of Henry VIII and the mother of Elizabeth I, and Elizabeth and Mary Stuart (also known as Mary, Queen of Scots) were cousins. These scenes represent the most important music of each opera, showing the deaths of these three women and how they were different but very similar in the ways they died.

WFMT: Since we’re not hearing entire operas, but just the finales of these three operas, how are the stories being told?

WFMT: Well, it’s not “opera light” for you, because these are challenging roles to sing. Are you doing anything in particular to prepare for this vocal challenge?

Radvanovsky: Praying? No, I’ve been working with my coach in New York, and for the past month, I’ve been doing recitals, but only including Bel canto music, because my last opera that I sang was Rusalka, which is completely different vocally and dramatically from The Three Queens. So for the last month or so, I’ve really tried to get my voice a little higher and more acrobatic, which is what one needs to sing this Bel canto, to have all the fireworks and agility of the voice. I’m really excited to be doing this. It’s a unique, one-of-a-kind project.

WFMT: Let’s talk about your wardrobe in this production. What can you tell us about The Three Queens‘ three gowns?

Radvanovsky: They are designed by Rubin Singer who is an amazing couture designer in New York. He is most well-known for doing Beyoncé’s Super Bowl halftime show costumes. He is an avid opera fan: he has dressed Renée Fleming, myself, Anna Netrebko, many opera singers. He loves the shape of the female body and loves making a woman look beautiful, which is so nice as an opera singer, supported yet you still have that freedom to move.

The lovely Ann Ziff, who is the chair of the board of the Metropolitan Opera agreed to sponsor all of this lovingly for my 50th birthday present. There’s a nod to costuming in these gowns, but with a modern twist on it. Rubin wanted these gowns to look modern and edgy, but still portray who these women were. The sumptuous gowns of Rubin Singer worn by Sondra Radvanovsky as Anne Boleyn, Mary Stuart, and Queen Elizabeth I in The Three Queens (Photos: Todd Rosenberg)

For Anne Boleyn, since she was beheaded, red is very prevalent, representing blood and the Tudor Rose. It’s a very flowing gown, but still looks very period, in fact, there’s a piece of ribbon on the bodice that is more than 100 years old.

For Mary Stuart, when you think of Mary, Queen of Scots, you think of Scotland and all of the green landscape, so she is in that color palette.

Then we have Elizabeth I, the Virgin Queen, and when you think of “virgin,” you think “white.” She is the edgiest of the three, the most modern, but also the most traditional all wrapped up into one. You have to see it onstage to believe it because it’s like she’s floating. They are stunning. They are truly pieces of art.

Sondra Radvanovsky portrays The Three Queens in two more performances through December 7 at Lyric Opera of Chicago. For ticketing and information, visit lyricopera.org.

In the Age of the Visual Album, What Can Opera Learn from Beyoncé?
Enrique Mazzola on Returning to the Stage, Taking the Reins at Lyric
In Their Own Words: Inspiring Quotes From Classical Artists and Friends Who Died in 2022
Music for Her Majesty: Important Musical Moments in the Life of Queen Elizabeth II of England
Chicago-born opera stars Janai Brugger & Matthew Polenzani trade hometown tales, tips for singing on camera
Celine Dion diagnosed with rare neurological disorder