Winner of the prestigious Avery Fisher Career Grant, flutist Demarre McGill is acclaimed for his “richly saturated tone, spirited technique, and expressive warmth” and has quickly become one of the most sought-after flutists of his generation. He enjoys an active career as a leading soloist, recitalist, artistic director, and chamber musician. McGill performed with pianist Victor Asuncion in November 2017 at Northeastern Illinois University.

Duo for Flute and Piano by Aaron Copland 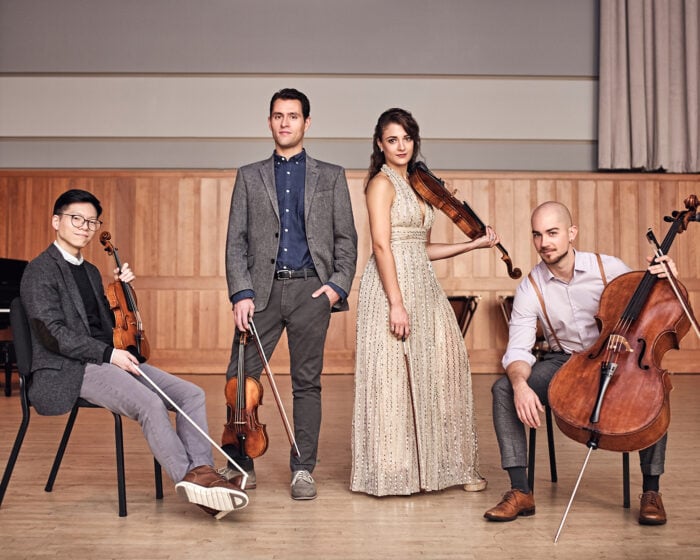 The Dover Quartet catapulted to international stardom following a stunning sweep of the 2013 Banff Competition, at which they won every prize. The quartet has since become one of the most in-demand ensembles in the world. The Dover serves as the quartet-in-residence for the Bienen School of Music at Northwestern University, where they performed in January 2017.

Ukrainian pianist Pavel Gintov has been described as “a poet of the keyboard” by the Illinois Entertainer and as a “musical storyteller” by Shikoku News. He has toured throughout Europe, Asia, Africa, and the United States and is an avid chamber music performer. This is a rebroadcast of Gintov’s recital from May 2017 at the Chicago Cultural Center.

Music of Bach, Bortkiewicz, and Chopin Rafael Vivanco started playing the guitar at the age of 11 in Peru. He went on to study at the University of British Columbia in Canada and Roosevelt University in Chicago. The Chicago Latino Music Festival featured Vivanco in an evening of Spanish guitar music at the Instituto Cervantes in October 2017.

With Billboard chart-topping albums, Emmy-nominated music videos, and an extensive international touring schedule, pianists Greg Anderson and Elizabeth Joy Roe aim to make classical music a relevant and powerful force around the world. The exuberant duo shared their artistry with WFMT’s listeners in May 2018.

Music of Piazzolla, Brahms, Schubert, Bernstein, and others