Cellist Benjamin Lash in his teens and in his 20s.

This week, Introductions goes back to the very first year of the program to see what alumni have gotten up to in the past twelve years. We discover one musician who’s still in the classical world, one who’s changed musical direction into indie pop, and another who’s pursuing a PhD in Philosophy. This episode is presented by Robbie Ellis with research assistance from WFMT’s Andrew Patner Fellow, Christian Thorsberg.

Growing up in Evanston, Benjamin Lash began studying cello at the age of six. In his early teens, as a first place winner of multiple Chicago area competitions, he performed concertos by Saint-Saëns, Shostakovich, Hindemith, and Haydn. He gave a solo recital on Introductions on October 4, 2008, while in his senior year of high school and as a fellow of the Music Institute of Chicago Academy. Moving to California for college, Benjamin studied cello at Colburn Conservatory of Music with Ronald Leonard, continuing with postgraduate study at the USC Thornton School of Music with Ralph Kirshbaum. He was a top prizewinner in the Washington International Competition, and has performed concertos with the Downey Symphony, the Brentwood Symphony Orchestra, the Colburn Orchestra, and the USC Thornton Symphony. Benjamin performs in the Los Angeles area and is a member of the SAKURA Cello Quintet. He is a passionate teacher: he is on the faculty of the Colburn Community School of Performing Arts and maintains a private studio. 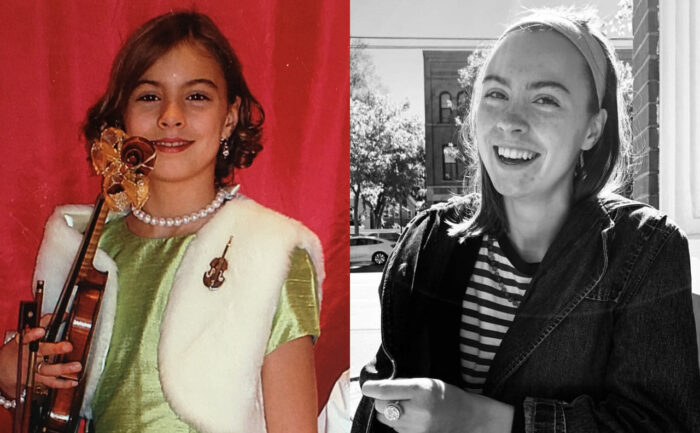 Sadie McCloud as a pre-teen violist and as a Yale grad student.

Originally from Wheaton, Sadie played viola in a number of youth and community orchestras: the Elgin Youth Symphony Orchestra, the Wheaton College Symphony Orchesra, and the Hall School of Music Baroque Orchestra (forerunner to the Camerata Chicago Academy Orchestra). At age 11, she appeared with the latter on Introductions on July 6, 2008, live from Barrett’s Home Theater in Naperville. She completed her Bachelors at Wheaton College, concentrating on Mathematics and Philosophy, and representing the school in Cross Country. She’s now doing postgraduate study at Yale University in the Classics and Philosophy combined program, looking into Aristotle’s Nicomachean Ethics, the concept of vice, and the possibility of radical ethical transformation. 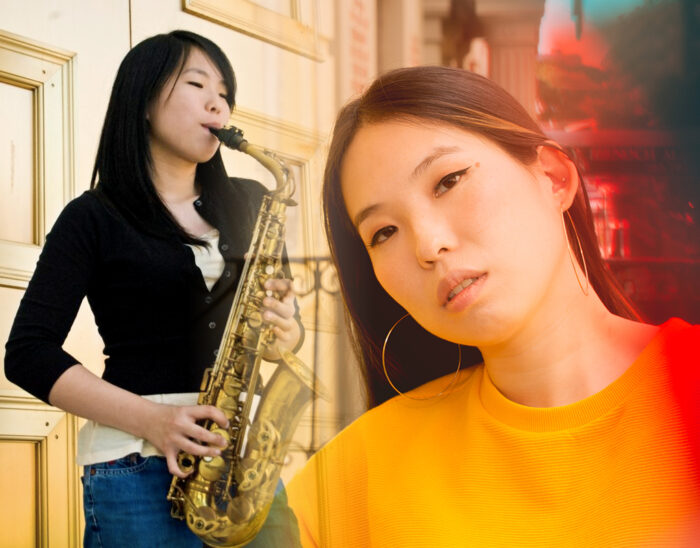 Jessi Lee as a saxophonist in her teens and a pop musician in her 20s. (Photo credits: Jamie Current and Noel Woodford.)

Jessi Lee is a saxophonist, artist, and producer in New York City. Originally from the suburbs of Chicago, Jessi attended Carl Sandburg High School in Orland Park, and was a member of the Merit School of Music Honors Saxophone Quartet, with whom she performed on Introductions on May 24, 2008. Jessi received her Bachelors’ Degree at Berklee College of Music as a Presidential Scholar. She earned her Masters’ Degree at the Manhattan School of Music. After grad school, her focus shifted towards songwriting and producing, though she continues to perform and record as a saxophonist. She’s performed everywhere from Carnegie Hall to Lincoln Hall in Chicago to Blue Note Tokyo. She’s collaborated with the electronic music duo Broken Luxury, and she is currently releasing new solo artist music.