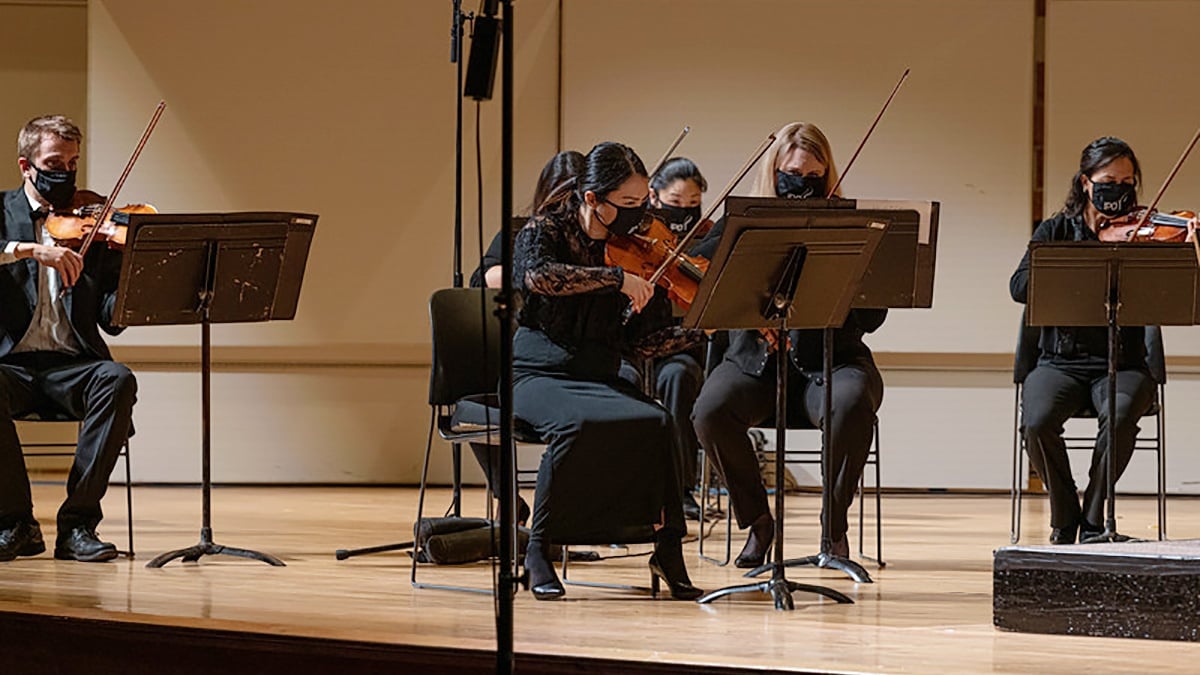 As our concert halls and opera houses lay mostly dormant this fall, audiences and musicians alike are feeling the absence of live music, especially in these difficult times. Music organizations and artists have responded in a variety of ways, including by re-releasing past recordings, giving access to behind-the-scenes content, or creating performances recorded in quarantine. What bridges these different approaches is a common conviction that music can help heal and reassure us.

With that mission, the Illinois Philharmonic Orchestra launches its season this weekend with a free streaming orchestral performance at 7:00 pm on Saturday, October 24 on YouTube and Facebook. The stream will remain available for on-demand viewing until December 1. Entitled “IPO Reimagined,” the program was recorded this past weekend at Ozinga Chapel at Trinity Christian College with no audience. The concert features 29 socially-distanced and masked string players — just under half of the orchestra’s 60 members.

As with every IPO season opener, this concert features an American composer’s work. This year, that composer is George Walker — the first Black composer to win a Pulitzer for music — whose seminal Lyric for Strings is paired with Tchaikovsky’s Serenade.

For IPO concertmaster Azusa Tashiro, the opening of the season (albeit virtually) as well as the spotlighting of a composer of color are things to be celebrated in a challenging time. WFMT spoke with Tashiro about the importance of bringing composers of color into the concert hall, her hopes for the season to come, and what music can bring us during these unprecedented times.

WFMT: The Illinois Philharmonic pre-recorded this upcoming concert this past weekend. How did it feel to reunite as an orchestra? 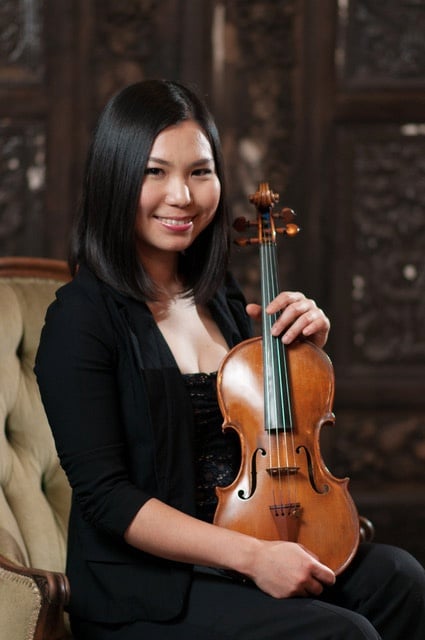 Azusa Tashiro: Oh, my gosh, that was amazing. I have never missed playing with other musicians this much, and I had simply missed seeing my colleagues; it was too bad that I couldn’t really be near them or hug them. But it was amazing.

WFMT: Did you notice any difference in the sound?

Tashiro: Absolutely. One major difference was that we were sitting socially distanced, which was very tricky. In the regular orchestra setting, we have a conductor to look at, but also, it’s really important to listen to each other. However, because we were sitting so far apart, what you hear mostly is your sound, and it was really hard to listen to each other. We learned that we have to rely more on visuals: looking at the conductor or looking at others for body language cues. I think we improved a lot, but this is certainly something that we need to get used to. But even though this was new, it still felt amazing to be back.

WFMT: Take us through the repertoire for this concert.

WFMT This art form — as well as the whole country — is in the midst of a reckoning in terms of racial equity and justice. Why is it important to you to incorporate more composers of color into the concert hall?

Tashiro: I’m personally very excited that the world is moving toward this because I’m a woman of color. I feel very strongly responsible for this movement. From my point of view as an Asian woman, there are so many Asian performers in the classical world. But when I question myself as to how often I’ve performed music by Asian composers or female Asian composers, it’s close to zero. As an Asian woman, I feel very responsible to push this movement forward for inclusion and diversity.

Last summer, I had the honor to program one of the IPO’s chamber concerts, and we programmed all female composers. I programmed Chen Yi, a Chinese-American composer. And also Jennifer Higdon, who’s American and an LGBT composer. Throughout this experience, I have discovered so many composers that I hadn’t played or even didn’t know. 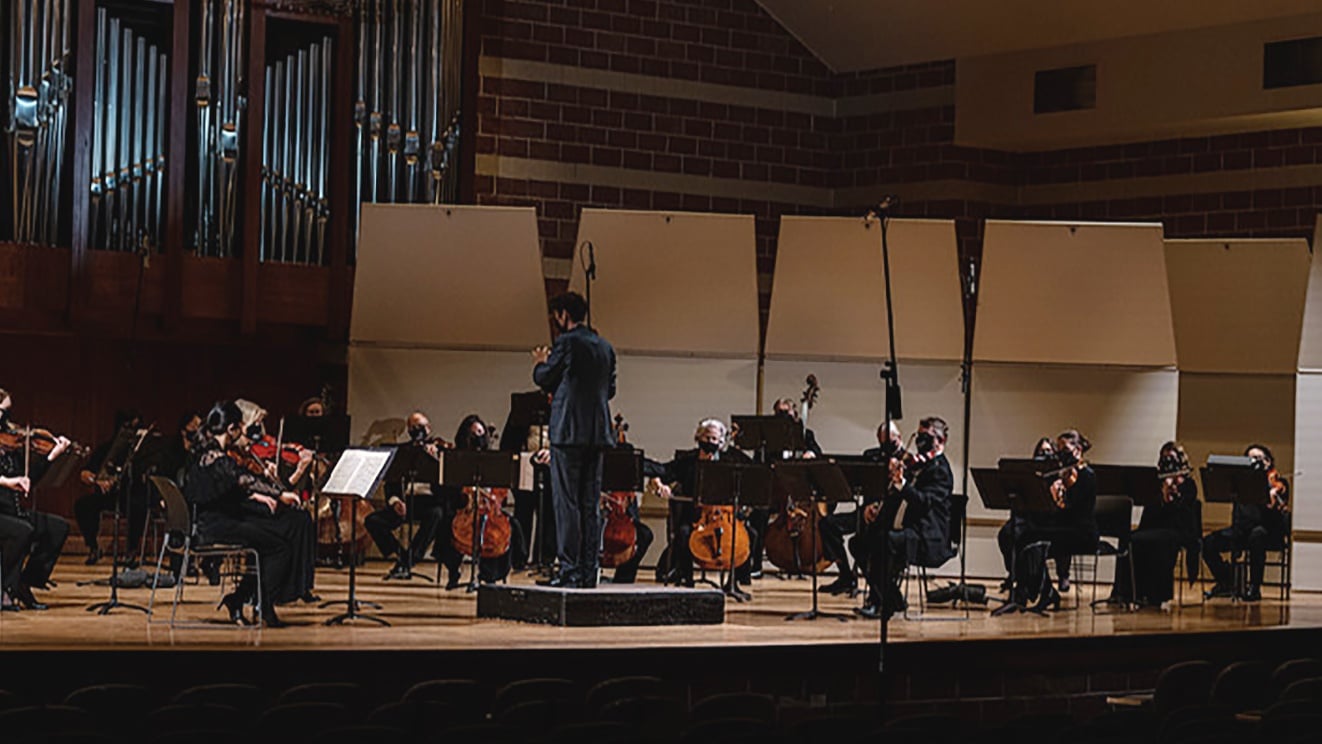 WFMT: Why do you feel that music is important in this moment?

Tashiro: To be honest, when this lockdown started, I was actually very excited. I was looking forward to getting some time off to practice, and I was very motivated. But when we learned that the rest of the orchestra season was canceled and maybe we were not going be able to open this fall either, I got really, really depressed. I don’t think it was just us musicians who felt that way; I think all people, especially frontline workers or those who have lost their jobs share in those feelings. It’s very important that they have something to rely on, something that warms up their heart. I hope that this message and music is delivered to people who need light in their lives during this very difficult time.

WFMT: The virtual streams are a great solution in a lot of ways, but they are definitely different from an in-person concert. What do you think is lost and gained in these streams?

Tashiro: What we gain from this streamed concert is that first of all you can listen to it and watch it at home, a more relaxed setting. You can sit on your favorite couch and you can drink your favorite drinks and eat, which you can’t really do at the concert hall.

Also, the cameras can go in really close to the musicians, and you can actually see the way musicians’ fingers move or our faces very close up, which is something that you cannot do at the concert hall.

On the other hand, of course, you miss the tensions or the experience of the concert hall. I can’t really hear everyone breathe at the same time or just the soundwaves actually hitting your face, your body. Those things you definitely miss.

WFMT: Looking forward to this season and beyond, what are your hopes?

Tashiro: My hope is to fully reopen as soon as possible. Music never dies, no matter what happens. However, we always need support. And I hope many organizations can survive during this difficult time. I just want everyone to listen to music more and hope for the future.

The Illinois Philharmonic Orchestra’s season launches virtually this Saturday, October 24 with a free streaming concert available on the orchestra’s YouTube and Facebook pages. The performance will be available for on-demand viewing through December 1. Next month, the IPO will host the Midwest premiere of The Bowmakers, a feature-length documentary that explores the world of the bow and their makers. For more information, visit ipomusic.org.

In the Age of the Visual Album, What Can Opera Learn from Beyoncé?
Grammys 2022: See All the Classical+ Nominees (And Winners)
Decade in Review: The 2010s and Classical Music
'The reach is exponentially larger': How Kamala Sankaram Brings New Audiences, Stories to Opera
Hope and Strength: Celebrating Black Artistry with Lawrence Brownlee & Lyric
Lyric Returns With Free Star-Studded Virtual Gala