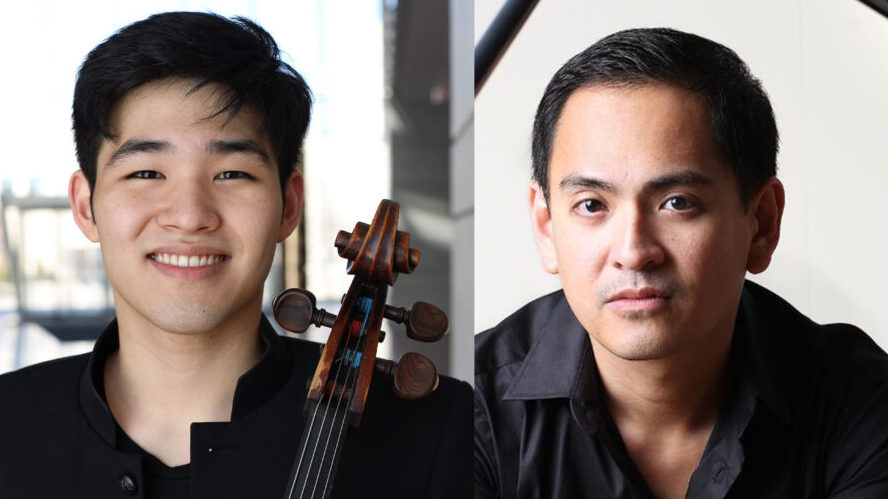 Canadian cellist Andrew Byun is joined by pianist Victor Santiago Asuncion for a live performance of Schumann, Tailleferre, and Beethoven.
Biography courtesy of IMF Chicago.
Andrew Byun is a Canadian cellist studying under the tutelage of Hans Jorgen Jensen at Northwestern University. Byun has appeared in masterclasses with Steven Isserlis, Ida Kavafian, Jian Wang, Frans Helmerson, Laurence Lesser, Thomas Riebl, Jérôme Pernoo, Jennifer Higdon, and Wen Sinn Yang among others and has worked closely with members of the Borromeo, Brentano, Shanghai, Emerson, Vermeer, Orion, and Dover Quartets. In 2015, Byun was named a Jack Kent Cooke Artist and was invited to perform at Jordan Hall on NPR’s program “From The Top” 300th Anniversary Show. In 2014, he won the Grand Prize at the Seoul Arts Concours and in 2015, he won the Gershwin International Music Competition and Boston Trio Competition, performing with the Boston Trio in Jordan Hall. He has been a laureate at other competitions including the Sejong Philharmonic Competition, NEC pre-college Concerto Competition, and American Protégé International Competition among others and was a semi-finalist at the 2018 Stulberg International String Competition.

A native of South Korea, Byun attended high school at Milton Academy in Massachusetts and is currently majoring in Cello Performance and Philosophy at Northwestern University. Byun has studied with Myung-wha Chung, Yeesun Kim, Soyun Kim, and Emmanuel Feldman.

Hailed by The Washington Post for his “poised and imaginative playing,” pianist Victor Santiago Asuncion has appeared in concert halls in Brazil, Canada, Ecuador, France, Italy, Germany, Japan, Mexico, the Philippines, Spain, Turkey and the USA, as a recitalist and concerto soloist. He made his orchestral debut at the age of 18 with the Manila Chamber Orchestra, and his New York recital debut in Carnegie’s Weill Recital Hall in 1999.

A chamber music enthusiast, he has performed with artists such as Lynn Harrell, Zuill Bailey, Andres Diaz, Antonio Meneses, Joshua Roman, Cho-Liang Lin, and many others. He served on the chamber music faculty of the Aspen Music Festival, and the Garth Newel Summer Music Festival. He was also the pianist for the Garth Newel Piano Quartet for three seasons. His recordings include the complete Sonatas of Beethoven with cellist Tobias Werner, sonatas by Shostakovich and Rachmaninoff with cellist Joseph Johnson, and the Rachmaninoff Sonata with the cellist Evan Drachman. He is also featured on the award winning recording “Songs My Father Taught Me” with Lynn Harrell, produced by Louise Frank and WFMT-Chicago.