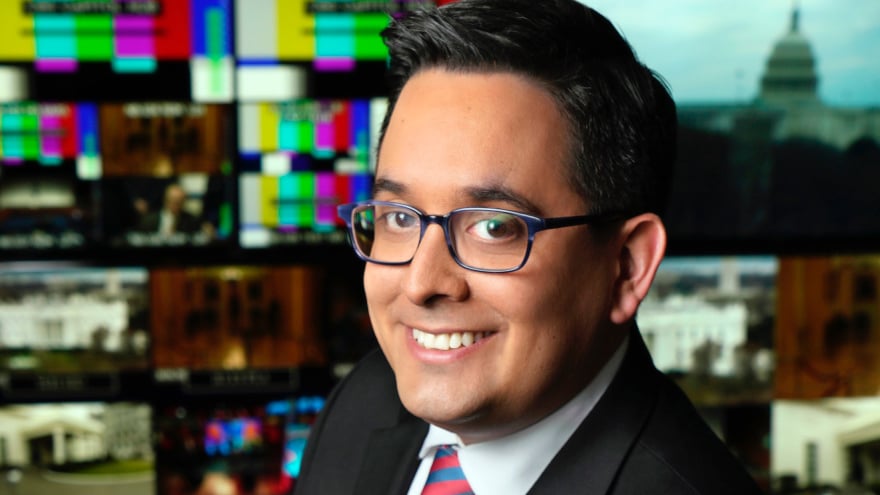 From the age of 3, CBS News political correspondent Ed O’Keefe toiled at a keyboard—not in typing, as unintended preparation for his 13 years at the Washington Post, but in studying classical piano in Delmar, a suburb of Albany, NY. Although he loved playing, his interest in current events and politics pulled him into a journalism career. No stranger to Chicago, in 2008, O’Keefe was in Grant Park the night that Barack Obama was elected president. O’Keefe, 37, is about to become a fixture in the White House press room, as he will cover the Biden administration for the TV network he joined in 2018. But he has never left his first passion far behind. He shared some musical memories with us before taking on his new assignment at CBS News as Senior White House & Political Correspondent.

Candice Agree: You started music lessons when you were 3. How did your study at such a young age come about?

Ed O’Keefe: As I understand it, my parents knew neighbors or friends who had enrolled their kids in The Music Studio, a music school that begins by teaching the fundamentals of music, moves young kids into group piano classes to learn basic piano music, and then graduates later elementary-aged students into private lessons. From age 3 to 18, my sisters and I were there, so much so that we joked Mom deserved a reserved parking spot — or at least valet parking.

Agree: Did your parents have a piano at home before you and your sisters started studying?

O’Keefe: We began with an electronic keyboard and then had a chocolate brown Kawai upright until we moved. Then, Mom and Dad bought a brand-spanking-new six-foot Kawai grand. They still have it. Binge purchase, for sure, but it was a well-used instrument worth the investment. (That’s what my dad would say, at least.) 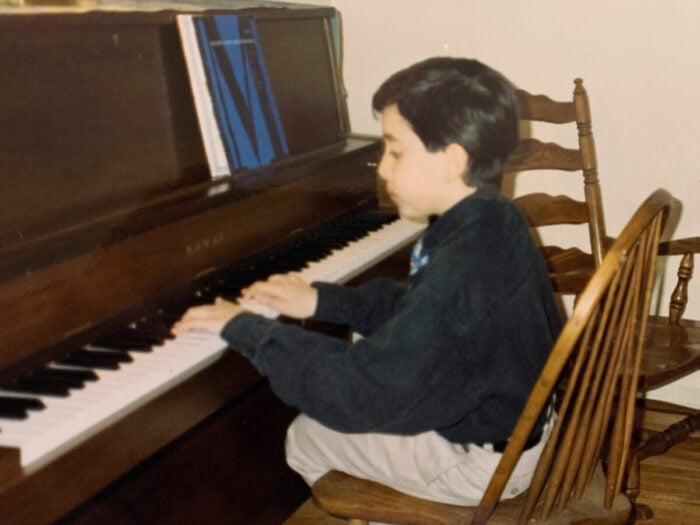 Agree: How old were you when you had your first formal lesson?

O’Keefe: Formal one-on-one courses began at age 8. We began with Bach and other Baroque classics — somewhere there are photos of me at one of The Music Studio’s Baroque concerts where my teacher, Noel Liberty (yes, an awesome name!) made us dress in baroque costumes and wigs and play on a harpsichord. I’d like to purchase those photos from whoever has them, so they can be safely locked away.

Agree: Any forays into pop tunes?

O’Keefe: All of the training was in classical piano. No jazz, no improv, no rock. Just the classics.

Agree: Do you remember the first piece you learned?

O’Keefe: Bach’s Minuet in G was one of the first, for sure. I’m not as big a fan of the Baroque period, I remember liking the Romantic era much more, especially Chopin.

Agree: 15 years of piano study is a big commitment. Did you ever contemplate a career as a pianist?

O’Keefe: I’d argue that 15 years studying piano prepared me better for many of the things that I now do for a living than any other element of my formal education. As much as I love and appreciate music — the fundamentals of it and the different pieces I learned — in hindsight I know it became less about half-notes, arpeggios, transposing, and mastering Chopin’s 24 Preludes and more about some pretty critical lessons: how to memorize material, an essential skill for live television; how to perform memorized piano music in front of an audience of strangers — talking into a camera to reach millions of viewers is a similar vibe; and how to tackle and accomplish big assignments.

Agree: Who are the pianists of any genre that you admired?

O’Keefe: The big three for me remain Billy Joel, Elton John, and Victor Borge. They made the piano cool to the masses.  I really appreciate how Elton took his classical music training and turned it into more than 50 years of memorable music and performances. And Borge’s timing impresses even more today, considering that he continued performing into his old age. 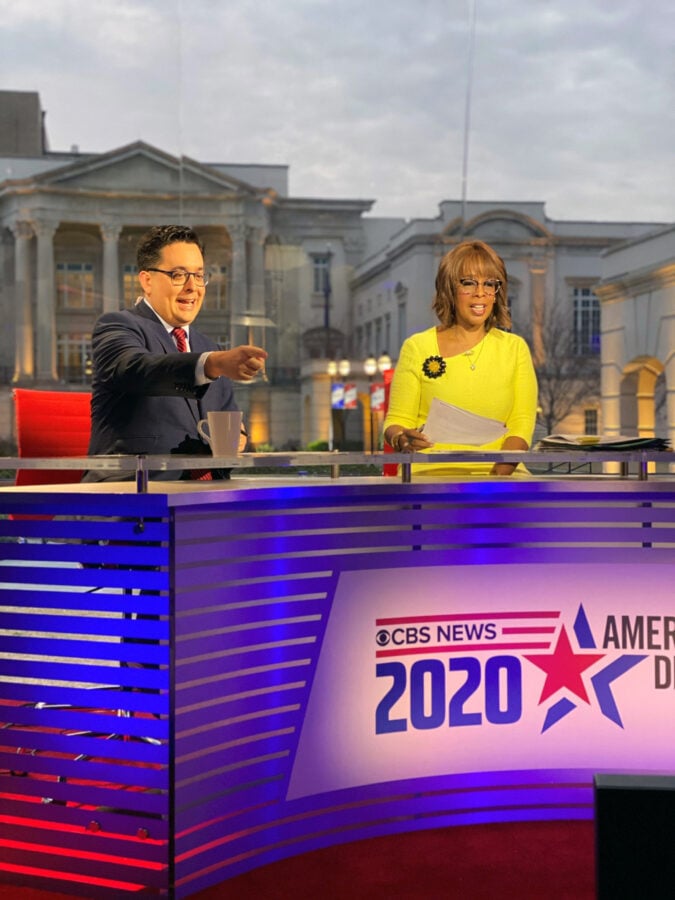 Agree: Is there a concert you attended that just blew you away?
O’Keefe: I did see Borge in person, once. That was awesome. Otherwise, I remember many summer nights at Tanglewood, where my grandparents were season ticket holders, to see the Boston Symphony — conducted by Seiji Ozawa when I was young. Mom and Dad, or the Music Studio, also brought me to see the Albany Symphony Orchestra, which is still led by David Alan Miller.

Agree: How old were you when you got the current affairs/politics bug? Did that take you away from the piano?
O’Keefe: Oh, it began at a young age. I grabbed the newspaper off the front stoop every morning and dove into it first, often summarizing the headlines for Dad as he ate breakfast. I wouldn’t say it took me away from the piano, it was a dual interest. But my interest in current events superseded any hopes of being a classical musician early on.

Agree: Was piano your sole instrument? Did you play in a school band or orchestra, or sing in a school choir? Electric guitar was popular with high school boys when I was a teen.

O’Keefe: In elementary school orchestra, I really wanted to play the saxophone, but the ongoing orthodontic work in my mouth made it impossible to blow the reed correctly. My arms were too short to play the trombone, so that didn’t work, either (truly one of the more crushing moments of my childhood.) I secretly wanted to play the drums but knew that wouldn’t work. Everyone else wanted to play the clarinet, so those seats filled up quickly. So, I ended up playing the flute. I did not like it — at all. The music teacher begged me to do another year, but I gave it up. All those years performing at the piano — a far louder instrument with a better opportunity to stand out — convinced me it was better to play music with my fingers. 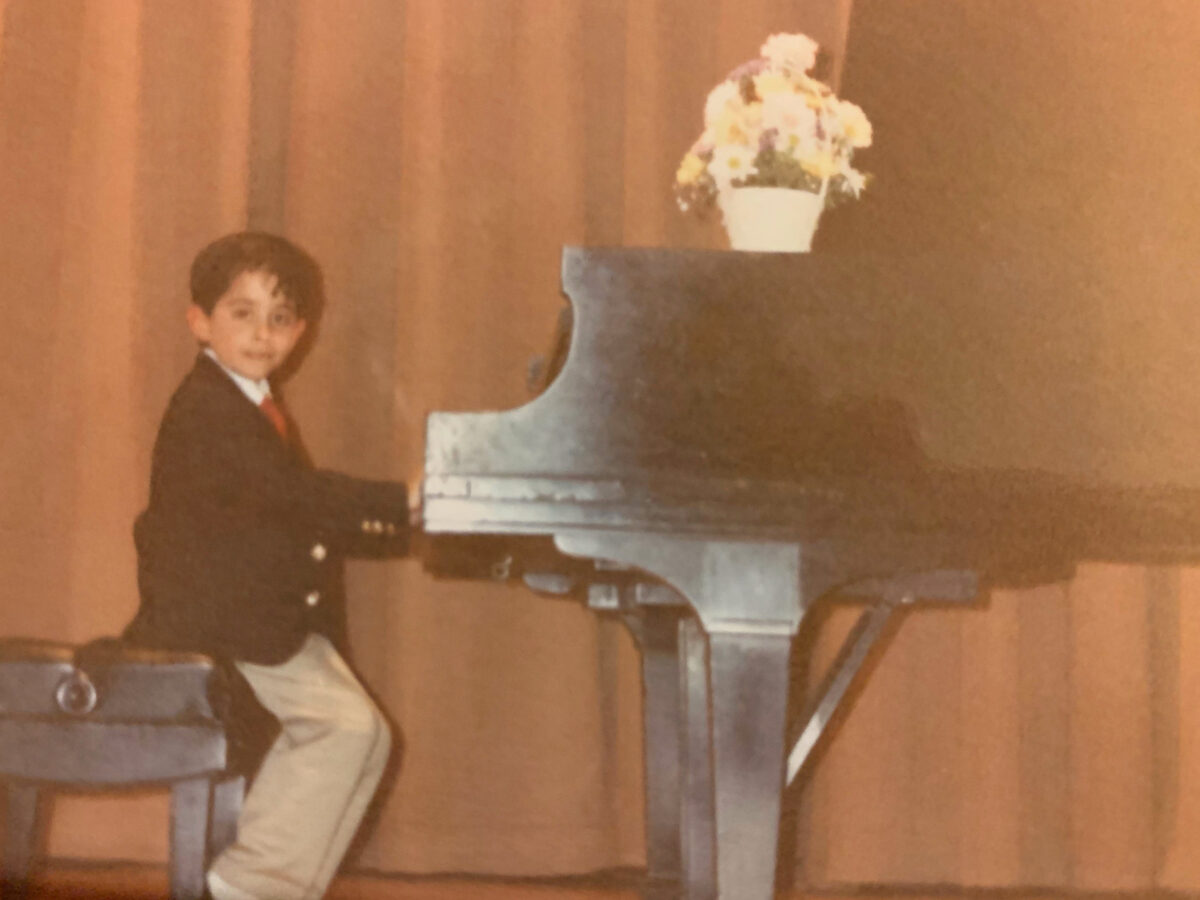 Agree: Do you feel those years alone at the keyboard prepared you in some way for a career that, aside from the on-camera aspect, is, for a good part of it, solitary? I would imagine that the time alone spent practicing the piano might prepare one for a career in journalism, another field that demands persistence, self-evaluation, and patience.

O’Keefe: I’d never thought of this, but you’re on to something. Thing is, even as I practiced piano every day after school, Mom was around, or my sisters were upstairs doing homework or running around the house. I can remember Mom sometimes shouting from the kitchen, “Do it again!” Or, “It’s sounding better!” So for me, playing the piano at home was a singular task, but there was always an audience around.

But yes, practicing and preparing for a solo performance and getting your head in the right space and the persistence and patience — all of that lends itself well to daily journalism and the solitary nature of traveling the country right now to covering a campaign and a presidential transition during a pandemic.

Agree: Aside from extra-curricular piano study, you also attended Summer Sonatina piano camp. It does sound more fun than, say, computer camp. Still, spending the summer practicing piano is not a choice that many kids make. What was the experience like?

O’Keefe: Summer Sonatina is the only summer camp I attended as a kid. It’s based in Bennington, Vermont and operated by Polly van der Linde, whose parents launched the camp for kids in 1969 out of their large home. The house is packed with pianos — one in each bedroom where campers bunk, plus the living room, even closets under the stairs. During practice hours, the amalgamation of sound is quite a thing to hear. Polly still hosts dozens of kids over several weeks in the summer. The rest of the year they offer piano instruction for kids, and adult mini camps for older players who are either starting, continuing, or want to revive their playing skills.

I’d spend at least two weeks each summer at the camp, where in addition to practicing three hours a day, there’s a weekly concert, choir practice, swimming, and field trips to attend concerts at Saratoga Performing Arts Center or Tanglewood, each only about an hour to 90 minutes away.

Agree: Tell me about the recording you made in high school. How did it come about? What was the repertory, and, most importantly, how can I find it?

O’Keefe: Given everything else a high school senior needs to do, and the fact that a career in classical music wasn’t in my future, Mrs. Liberty proposed recording a CD of some of the music as the capstone of our time together. So, we rented a studio at SUNY Albany for the afternoon and it was just me and the piano. I named it, “I’ll Let My Fingers Do The Talking.” Very few copies remain. But now you’ve got me thinking there might be a market for this… 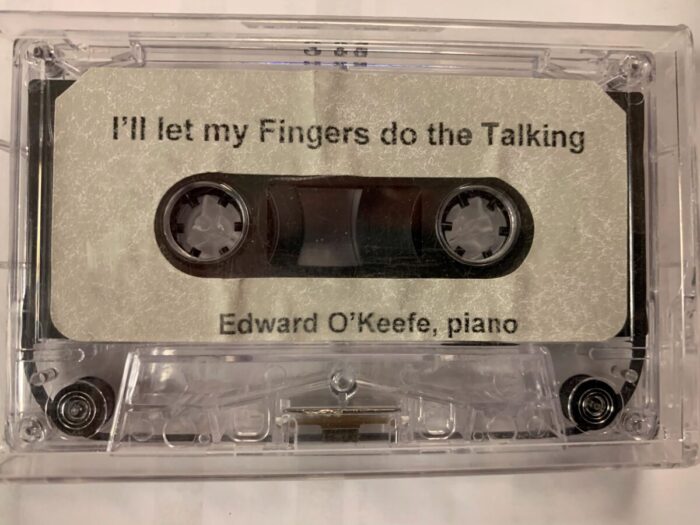 Agree: You’ve worked in both broadcast and print journalism, primarily for CBS News and the Washington Post. Is it difficult to go from writing for print to writing for air?

O’Keefe: There isn’t enough time and space even on the internet to explain the differences and similarities. Let’s put it this way: my answers to this interview are the longest, most complex writing I’ve done in weeks.

Agree: As a political correspondent, you’re no stranger to life on the campaign trail. This past election cycle, you followed the Biden campaign. Living out of a suitcase, especially during this COVID pandemic, must have been exhausting and unsettling. Do you ever get a chance to sit down at the keyboard?

O’Keefe: No, and that’s why I really want to get back to playing music. It’s no longer an extracurricular obligation, so it will be a way to relax, to relieve stress, and to accomplish something other than scooping the competition. And it always was and will be a unique and memorable way to entertain people. In high school, I read “Piano Lessons,” a book by NPR’s Noah Adams, about his year-long quest to learn the piano. At the time, I thought, “That will never happen to me.” Well, life, adulthood, and your day job get in the way and sure enough, it happened to me. One day in the future, I’d like to commit to a similar goal of re-learning the work I spent 15 years studying as a kid. Hopefully soon. 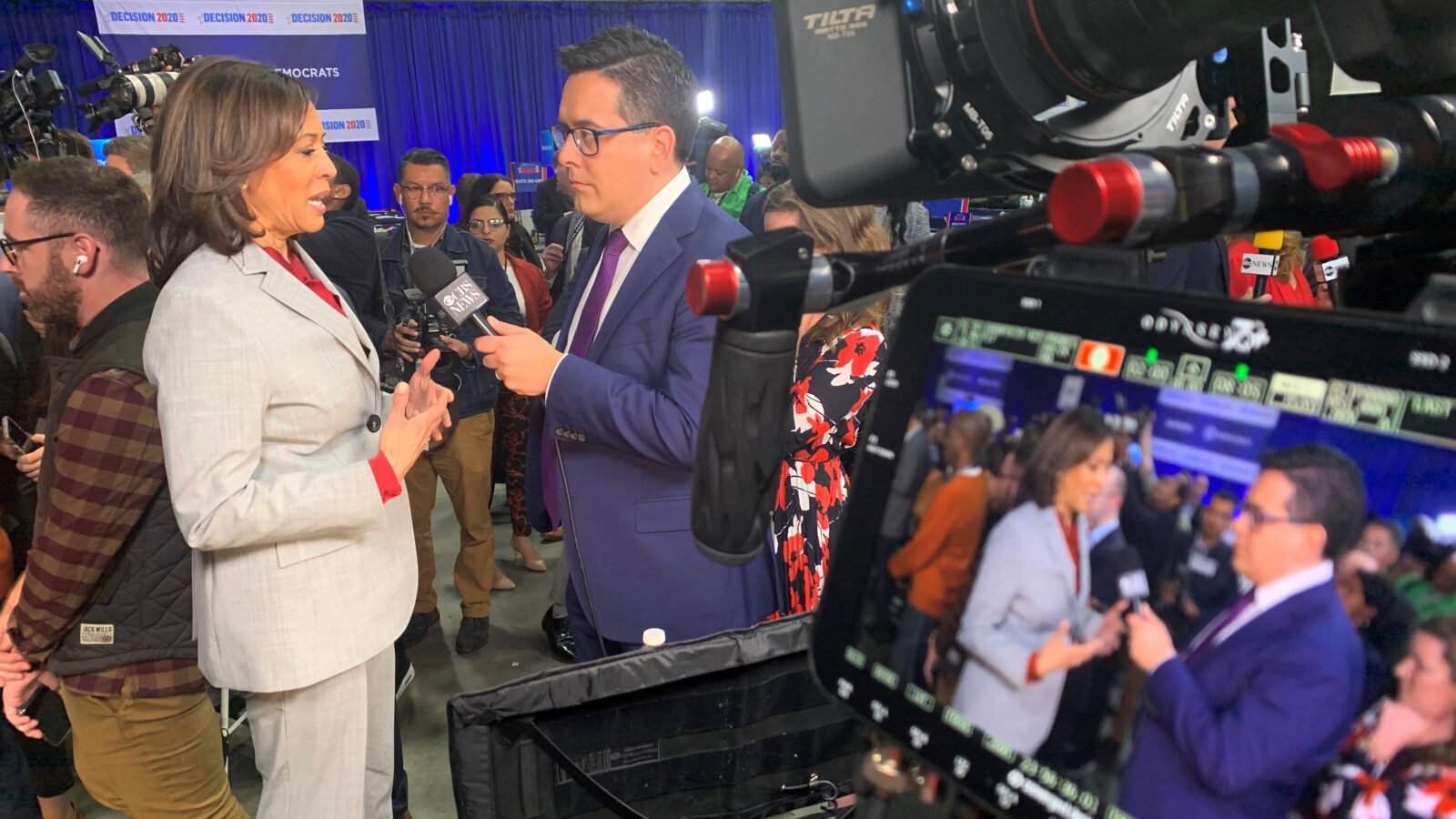